Quorum Sensing for the Mutes 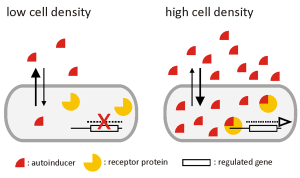 Figure 1. QS in Gram-negative organisms in­vol­ves two regulatory components: the tran­scrip­tio­nal activator protein (receptor protein) and the autoinducer (AI) molecule produced by the AI-synthase. Accumulation of AI occurs in a cell-density-dependent manner until a thresh­old level is reached. At this time the AI binds to and activates the receptor protein, which in turn induces gene expression. Figure adapted from Source

It is (almost boringly) obvious that cell-to-cell com­mu­ni­ca­tion is vital in multicellular organisms. To function pro­per­ly, all cells in a tissue have to know – and let their neigh­bors know – where exactly they are, which tasks they're performing right now, when it's time to dif­fer­en­ti­ate, to propagate, and also when it's time to die. But when it comes to communication skills, unicellular microbes are just as chatty, and studying quorum sensing (QS) in bac­teria is among the more fascinating topics in today's mi­cro­bi­o­lo­gy. Elio mentioned this already in 2007, yet the fascination continues. Bonnie Bassler explains quorum sensing in a short YouTube video: "Quorum sensing is the mechanism bacteria use to communicate and act in groups. ... So what they do is that they make and release molecules, they use that as words. As bacteria are in an environment they are all releasing these molecules, they measure those molecules, and they use that as a proxy to know that there are other cells around. And when they recognize those molecules are there, all the bacteria in the environment will take on a behavior in unison. So what they're doing with quo­rum sensing is talking to each other, counting each other, recognizing when they have the right number of cells that they should all do something as a group." Figure 1 shows the basic regulatory circuit for QS in bacteria, but more intricate systems exist with respect to the chemical signals, the signal relay mechanisms, and the target genes controlled by bacterial QS systems. Among the best studied QS-regulated phenomena are bioluminescence, biofilm formation and virulence, which make perfect sense as "community enterprises". A particularly intriguing case of QS-mediated "community management" in Pseudomonas aeruginosa  has been described in detail by our late colleague Marvin here.

But not all bacteria participate in QS chatting! For example, Escherichia coli – and likewise its Sal­mo­nel­la cousins – lacks a homolog of the Vibrio fischeri LuxI synthetase for the common au­to­in­du­cer in Gram-negative bacteria, N-acyl homoserine lactone (AHL). Thus E. coli  is literally dumb – but not deaf: it has a homolog of the V. fischeri LuxR protein, SdiA, which upon binding to one of various AHLs acts as transcriptional regulator. SdiA has been shown to be involved in the re­gu­la­tion of acid resistance, of flagellar genes, and of virulence factors in EHEC strains (Shiga toxin), but it is not yet entirely clear to what extent regulation by SdiA depends on AHL binding. Adding to these fin­dings of E. coli  "listening" and reacting to the ongoing QS chat in its environment without actively participating, Ghosh et al. (2009) proposed that resident prophages in λ-lysogenic E. coli  – i.e., bac­teria that carry a λ prophage integrated in their chromosome; see Merry's post on ly­so­ge­ny in STC – are induced for propagation via SdiA-sensing of AHLs that were either produced by co-cultivated Pseudomonas bacteria or deliberately added to a pure culture. 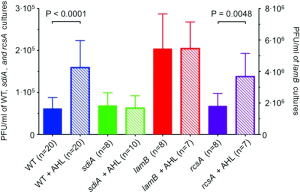 Figure 2. AHL QS signals reduce phage super­in­fec­tion. The concentrations of free phage from ly­sogenic cultures with/without AHLs are shown for E. coli  BW25113 (wild type [WT]), AHL re­cep­tor mutant (sdiA ), receptor mutant (lamB ), and a mutant of a transcriptional regulator for exo­po­ly­sac­cha­ride (rcsA ). The cultures were grown to an OD600 of 1.2 in the presence or absence of 5 µM AHLs. Free phage concentration is in­di­ca­ted as PFU/ml of culture. The number of in­de­pen­dent cultures tested (n) is indicated. Each error bar indicates 1 standard deviation from the mean. Reported differences were evaluated using a Student's t test. Note that PFU numbers are given at a different scale for the lamB host. Source

Turns out the story is more twisted. The lab of Sine Lo Svenningsen at the University of Copenhagen, Denmark showed in a recent study that E. coli  respond to high cell density by turning off – or at least reduce – the synthesis of the lambda phage (λ) receptor, LamB. Growing λ-ly­so­ge­nic host bacteria led to accumulation of free phages in the culture due to spontaneous prophage induction in a small percentage of the cells, i.e., the production and re­lease of progeny phages into the medium by host cell lysis. These progeny λ phages infect any host cells within their reach that have the LamB phage receptor sticking in their outer membrane (OM). But such "superinfections" are non-productive in lysogens as any incoming phage DNA is instantly inactivated for replication due to the pre­sence of the phage repressor of the resident prophage in the cells' cytoplasm. An aside: "super" in this context means "super-numerary", and not in any way "fantastic", except that probably the host cells consider the incoming phage DNA a super(b) opportunity to replenish the nuc­leo­tide pools for their own replication by chomping it down. Anyway, the phage concentration of free phages in the culture of a lysogen equals the number of phages produced by spontaneous induction minus the loss of phages by non-productive superinfection. When the authors let their lysogenic bacteria grow in the presence of added AHLs, the quorum sensing "words", they found a roughly 3-fold increase of the concentration of free phages in these cultures (Figure 2). This could indicate that either the AHLs, signalling high cell density, boosts prophage induction, as was suggested by Ghosh et al. (2009), or that fewer phages are lost through non-productive superinfection. Or, for completeness, a combination of both possibilities as Høyland-Kroghsbo et al. (2013) did not fail to mention.

The authors asked two questions to discriminate between the two possibilities: first, what hap­pens when the host cells are literally 'deaf' to the QS signal molecules? And, second, what happens when the cells are no longer susceptible to superinfection? The answer to question #1 could be found in a sdiA mutant of their λ-lysogenic host, which would lack the "ears" in their cytoplasm to "listen" to the AHL signal. Similarly, an answer to question #2 could be found in a lamB mutant of their λ-lysogenic host, which lacks the phage receptor in their OM. Virtually identical phage con­cen­tra­tions were measured for the AHL-treated and un­trea­ted sdiA mutant cells, the "deaf" ones, and phage concentrations were in the same range as for the untreated wild-type cells (Figure 2). This shows that AHLs don't exert any effect outside the SdiA-mediated regulatory circuit in this test system. Also for the lamB mutant host, the concentrations of free phages in the cultures were virtually identical for AHL-treated and un­treat­ed cells (Figure 2), despite their concentration being roughly 10-times higher than in the wild-type or sdiA cultures, which emphasizes the considerable "drain" of phages by superinfection in the wild-type host. 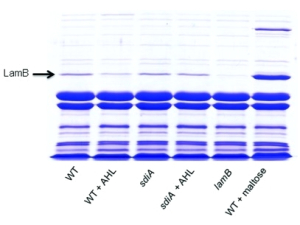 Figure 3. AHL signaling induces downregulation of the λ receptor LamB. OM protein pre­pa­ra­tions were separated by SDS-PAGE and stained with Coomassie blue. OM proteins from wt E. coli , AHL receptor mutant (sdiA mutant), and λ receptor mutant (lamB mutant) grown to an OD600 of 1.0 with 5 µM AHLs or 0.4% maltose are shown as indicated below the lanes. Note that LamB is an outer membrane (OM) protein that serves the cell as transporter for the di­sac­charide maltose, the sythesis of which can be stimulated by the addition of maltose to a glu­cose-lacking growth medium. Source

More importantly, however, the finding of roughly equal numbers of free phages in the AHL-treated and un­treat­ed cultures of the lamB mutant clearly shows that the increase in free phages in the AHL-stimulated cultures of the wild-type λ-lysogenic host is not due to boosted pro­phage induction but rather to a reduced rate of su­per­in­fec­tion of these cells. And, fully in line with the results of these genetic experiments, Høyland-Kroghsbo et al. (2013) found a significantly reduced rate of phage ab­sorp­tion in AHL-treated non-lysogenic wild-type cells, and a ~40% reduction of LamB in outer membrane (OM) pro­tein preparations of AHL-treated cells as compared to untreated cells, or sdiA mutant cells (Figure 3). But is the observed reduction in phage adsorption to AHL-sti­mu­la­ted bacteria physiologically significant? To answer this, the authors tested the AHL-mediated response of non-ly­so­genic wild-type E. coli  bacteria infected for one growth cycle with λvir phages ('vir' for virulent; a λ phage variant that cannot form lysogens and thus invariably lyses the host). They found that the number of cells sur­viving a λvir infection is 3 to 4 times higher in cultures that were grown in the presence of AHLs than in those grown in the absence of AHLs. This is significant, obviously.

Outside the lab, E. coli  bacteria encounter a plethora of different phages, while they would cer­tain­ly be able to listen to QS signals coming from other bacteria. Could AHL-stimulation protect E. coli  cells transiently also from infection by other phages, say, phage χ (chi) for example? This phage uses a different receptor than λ, the flagellum to be precise. And to be even more precise: this phage only attacks bacteria with moving flagella, it prefers live food (Michel Yarmolinsky gave a vivid portrait of phage χ here in STC). In the experiment, adsorption of χ phages to AHL-treated E. coli  cells was three-fold lower than in untreated cells. And, as in the case of λ, the AHL effect depended on the AHL receptor SdiA: protection was not observed in sdiA mutant cells. As men­tio­ned in the second paragraph, SdiA has been shown to be involved in the regulation fla­gel­lar genes. Now, here's why.

Høyland-Kroghsbo et al. (2013) propose that "by subjecting genes encoding phage receptors (lamB and flagellar genes) to quorum-sensing control, E. coli  has evolved the ability to increase the sub­po­pu­la­tion of phage-tolerant receptor-free cells at times where the risk of phage infection is ele­va­ted, despite the cost associated with temporary loss of the primary function of these phage re­cep­tors (uptake of maltodextrins and motility)." And they conclude: "Quorum sensing-mediated down­regulation of phage susceptibility may well turn out to be an important factor in un­der­stan­ding phage-host coexistence." The coexistence of phages and their bacterial host is often de­scribed – in antiquated cold-war terminology – as an "arms race", a battle in which both partners constantly evolve novel strategies for attack, defense, revenge, and survival. However, complete defeat of the enemy is neither in the long-term interest of the phages nor of the bacterial hosts: the former de­pend on their hosts for reproduction, the latter on their phages to access the larger bacterial gene pool. Maybe we should therefore rather learn to understand and characterize phage-host co­ex­is­tence along the wording of the Red Queen hypothesis: It takes all the running you can do to stay in the same place, L. Carroll (mentioned here and here in STC). Meanwhile, the results of Høyland-Kroghsbo et al. (2013) could encourage the Red Queen to take a pause from running, from time to time.