Squids and Luminous Bacteria. A Tale of Twists and Turns 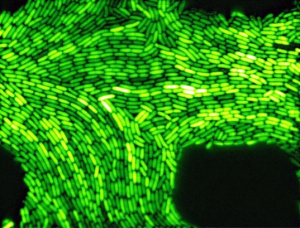 Bacteria are masters at making  multiple uses of their com­­po­nents. Thus, their constituents can serve a variety of dissimilar functions. An example is the li­po­po­ly­sac­cha­ride (LPS) of the Gram negative cell outer membrane. This uniquely bacterial constituent is important sta­bi­li­zing the structure of the membrane. In addition, LPS pro­tects the membrane from harmful chemicals, especially hydrophilic ones. Known also as endotoxin, LPS elicits a strong innate immune response by binding to receptors on various immune cells and inducing them to release inflammation-producing cytokines. Peptidoglycan (PG), the main constituent of the bacterial cell wall, is also such a multi-talented molecule, similarly involved in structural affairs and in eliciting responses from the host. It is fascinating that such molecules, whose role seems to be principally mechanical, should possess such communication skills. But then, mo­le­cules located on the surface of cells can be expected to be selectively sensed by other cells. The attributes of bacteria are certainly not just skin-deep, but their skin matters a great deal in their communication with other living things. To the well-known properties of LPS and PG, we add their participation in a particularly exciting symbiosis, that be­tween a Hawaiian squid and its luminescent bacteria, Vi­brio fischeri. We have previously touched on this subject here and here. The bacteria are located in a special struc­ture, the squid's light organ, where they provide the host with a way to discourage predators by shining its light downward, which, on a moonlit night, renders the squid nearly invisible. Amazingly, the squid gets rid of most of its luminous bacteria every day, to repopulate itself with them at night so that bacteria reach high population den­sities and emit light by a mechanism that involves quo­rum sensing (QS).

The establishment of the squid-vibrio symbiosis is quite elaborate and entails considerable mor­pho­ge­ne­sis on the part of the squid larvae. Briefly, the light organ of the newly hatched squid har­vests V. fischeri from seawater by entraining them via the beating of cilia on epithelial cells. As a response to the bacteria's PG, these cells manufacture mucus that specifically captures Gram-ne­ga­ti­ves (which the vibrios are). Next, the bacteria make their way to the light organ by traveling through ducts to crypts, where they happily multiply. Once there, the bacteria induce the de­ve­lop­men­tal changes that transform the organ from simply a bacteria-capturing device to one whose main function is to emit light. To return to LPS and PG, it is these two components that act in syn­ergy to induce the development of the light organ. LPS prompts early apoptosis of the no-longer needed bacteria-harvesting cells, a process required for the formation of the mature light organ. PG, on the other hand, promotes late stage apoptosis and the trafficking of the squid's phagocytic blood cells, the hemocytes. Remarkably, the main stages of this morphogenesis can be mimicked by adding purified LPS and PG monomers to the squid.

Now, the question becomes, how are LPS and PG released from the bacteria to be delivered to the squid? As it happens, these constituents are often discharged into the medium, where they par­ti­ci­pate in various kinds of host-bacteria interactions. One way that this takes place is by the de­tach­ment of membranous vesicles from the outer membrane. Such outer membrane vesicles (OMV) are involved in pathogenic mechanisms in vertebrates and, alone, can trigger morphogenesis of the light organ.

This begs the next question, does anything else facilitate the production of OMVs? This requires yet another cu­ri­ous twist in the story. Oddly perhaps, some bacteria make flagella that are encased in sheaths derived from the outer membrane. The reason for this strange ar­ran­ge­ment is not obvious (mechanical protection, masking from antibodies, anything else, reader?). Finding this out is not easy because no specific mutants in this function are as yet available. Note that sheathed flagella are not unique to these vibrios and are found in other vibrios, Helicobacter and Brucella.

A recent study from the McFall-Ngai and Ruby labs pro­poses that the rotation of sheathed flagella induces the release of OMVs, thus leading to the steps required for light organ morphogenesis. Purified OMVs work faster than whole bacteria, perhaps because the vesicles can diffuse faster into the squid's interior. Now, the authors asked, which component of the OMV is involved here, the O antigen of LPS or some outer membrane protein? Using mutants, they could show that it is the latter, specifically a protein called OmpU, which is these vibrios' major outer membrane protein. 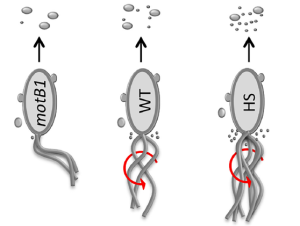 Figure 4. Cartoon depicting OMV production by different V. fischeri strains; the presence of shea­thed flagella and their ability to rotate (red arrows), and the relative proportion of OMV si­zes released. The motB1 mutant has a non-ro­ta­ting flagellum, the HS mutant is hy­per­fla­gel­la­ted. Source

The investigators further determined that rotation of the flagella promotes the production of the OMVs. Mutants in flagella make fewer OMVs, flagella hyperproducers make more. The sheath of the flagella matter, as shown by the fact that in different bacterial species that vary in the number of sheathed flagella per cell, their number correlates with the formation of OMVs. And these flagella influence the size of the OMVs, which tend to be smaller in their presence. Go figure.

Now the question arises, how does the rotation of whir­ling sheathed flagella contribute to OMV formation? The authors say: "We also hypothesize that because the cell's PG-linked outer membrane is contiguous with the rapidly rotating membrane surrounding the flagellar filament, it may be that OMVs are produced at this membrane-mem­brane interface when the bacteria are motile."

So there you have it, multifunctionality is all over the place. Constituents of the cell envelope, be­sides being essential structural components, act as developmental signals in the squid and fla­gella do not just move the bacteria around but also help them to shed some of their coat. A so­phis­ti­ca­ted world, that.