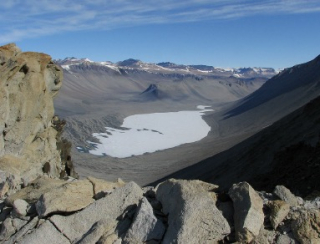 We may be running out of strange places to explore life on Earth, which is a shame because they often provide us with unexpected and exciting findings, especially microbial. Many such sites reveal a novel facet of microbial life, well worth the cost of the adventures involved in the studies. This includes investigating the coldest places on the planet, which of course are in Antarctica. Considerable work is being done there, always under demanding conditions. Let's deal with a couple of examples.

First, left undisturbed, bacteria exhibit substantial skills as architects. They are able to make three-dimensional structures that belie the builders’ relatively small size and complexity. Bacteria have possessed this skill for eons, as illustrated in ancient stromatolites that retain their complexity upon becoming fossilized. Such skills are evident in the present day. Intricate microbial edifices go by a variety of names, such as microbial mats, biofilms, differentiated structures, etc. (see here for an ecological approach). It pays in this regard to look at natural populations, the reason being that some of these interesting properties tend to get lost upon cultivation in the lab. In at least one case (involving the domestication of a strain of Bacillis subtilis) this is attributable to mutations in four genes and the loss of a plasmid. So, in naturam veritas.

Figure 1a (click to enlarge). Map showing the location of Lake Vanda in the McMurdo Dry Valleys. Source

Unperturbed environments can still be found in remote and nearly inaccessible places, such as regions of Antarctica. An example are the lakes of the McMurdo Dry Valleys, which have the unexpected quality of being mostly liquid all year long. The reason? They are hypersaline, some ten times more so than seawater. This keeps them liquid despite temperatures as low as – 40°  C in the air and – 20° C in the deep. We have already discussed the topic of Antarctic lakes in these  pages. 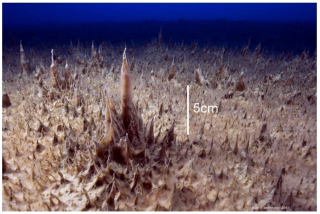 Figure 2. Pinnacle mats from Lake Vanda. Pinnacles are of diverse sizes ranging from sub-millimeter tall tufts to decimeter tall pinnacles. Box in A indicates area shown in B. Source

One of several of the lakes under study is Lake Vanda, which is 5 km long and is covered by a 3.5 – 4 meter ice sheet that melts briefly at the shore in the winter (its "summer"). In Lake Vanda, bacteria can lie undisturbed over vast periods of time, and have a chance to develop as they like. These bacteria, together with accumulated sediments, make extensive mats that cover much of the lake floor down to about 40 meters. From these mats, which are about 1 cm thick, protrude unusual structures, namely elaborate 'pinnacles' that vary in height from a few millimeters to around 20 cm. These pinnacles are roughly conical, although they vary in shape as they get larger. Their biota consists almost entirely of several kinds of cyanobacteria (if you need to know, they belong to the Oscillatoriales—Leptolyngbya, Phormidium, Oscillatoria, and a few others), plus a few diatoms and an occasional moss. The structures have colored layers due to the production of photosynthetic pigments. These communities are the most abundant form of life in the lake, which is otherwise largely devoid of planktonic organisms—probably due to the scarcity of phosphate. So, this site is worth the trip, even if it’s one of the most forbidding places on earth. 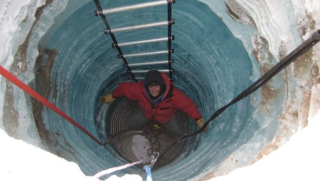 Figure 2a. A. Researcher Dawn Summer prepares a diving chute in an Antarctic lake. Source

The pinnacles of Lake Vanda grow in height and width every year, resulting in laminated structures that, like tree rings, provide a record of their growth and evolution. Growth of this kind of structure, including stromatolites, is generally thought to be due to photosynthetic organisms migrating towards the light. Involved are filamentous cyanobacteria, not necessarily motile ones. The particular morphology of these structures is crucially influenced by the dynamics of the community involved and, of course, by the local environmental conditions.

But it is fair to state that our knowledge of the factors influencing the formation of complex microbial structures is still incomplete. What may lead to greater insight into these processes are changes of local conditions over time. In recent years, the lake has been gradually increasing in depth (it is fed by a river), which provides information about older forms found at the greater depths and the more recent ones closer to the surface. How bacterial communities respond to such changes may indeed be quite revealing. A recent paper on this subject was authored by a group of researchers from several institutions, some colorful sounding: New Zealand’s University of Canterbury’s Gateway Antarctica, the SETI institute’s The Carl Sagan Center for the Study of Life in the Universe, plus the University of California at Davis, and London’s Museum of Natural History. The investigators carried many analyses of the water of the lake including Photosynthetically Active Radiation (PAR, which is about the same as visible light), measured at times by an intrepid diver. 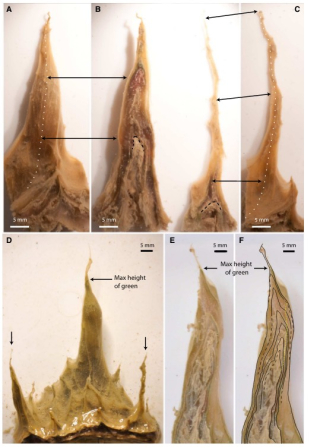 Figure 3. Two pinnacles of the same height but with different geometries that grew 3 cm apart. The pinnacle indicated with an arrow on the left was colonized by the subsurface community whereas the indicated pinnacle on the right was not. The large pinnacle was colonized by the green/purple subsurface photosynthetic community. (E–F) Cross section of a large pinnacle with some laminae outlined in C. The internal laminae have a rounded tip, whereas the pinnacle is peaked. Source

The authors also made a thorough morphological analysis of the mats and pinnacles, including the small tufts that arise from them. All these structures are laminated and the distinct layers vary in thickness and pigmentation, brown at the surface, green and purple below it. Their photosynthetic ability also varies across the pinnacles, the highest activity being just below the surface in green and purple zones. These are readily penetrated by light.

How do the pinnacles grow? As seen in Fig. 4, they start out as small tufts, arising (perhaps at random) from the mats that cover the lake bottom. These protrusions then grow upward by the accumulation of lake sediment and the further development of the cyanobacteria. When pinnacles reach a diameter of 20 – 30 mm, they develop a cylindrical base that increases in height. Just how this happens is discussed in detail in the paper. The rate of early pinnacle growth was estimated at about 0.2 mm per year. The larger pinnacles grow at faster rates, some close to 4 mm per year, although these growth rates proved to be quite variable. This process is highly influenced by the species of cyanobacteria, which themselves prefer different environments within the pinnacles. In the authors' words: "…. an integrated model of biomass accumulation is required to explain pinnacle characteristics." This approach, they suggest, holds also for the development of modern stromatolites and other complex structures. 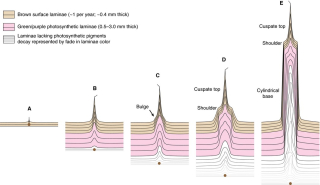 Figure 4. Sketch showing the growth and morphology changes in pinnacles from tufts (A) to climax pinnacles (E) with extensive internal photosynthesis. Source

What have we learned? That things are not simple, even in a relatively undisturbed environment such as the lakes of Antarctica. Again, as the authors say: "Pinnacles in modern microbial mats in Lake Vanda, Antarctic, emerged from the behavior of the constituent microbial communities in response to their environment. The distribution of communities, their photosynthetic potential, and pinnacle morphology suggest that pinnacles initiate as small tufts composed of Leptolyngbya morphotypes on prostrate mat due to random irregularities in the surface. These tufts become pinnacles as they develop laminae and continue to grow. As pinnacles increase in size and age, their interiors become colonized by a community that contains more abundant larger Phormidium morphotypes and Phormidium/Tychonema genotypes. Internal laminae thickened due to subsurface net photosynthesis. The volumes of pinnacles expanded to form shoulders, creating distinctive pinnacles with cylindrical bases and cuspate tops. This morphology requires a very specific distribution of biomass accumulation that depends on multiple microbial communities responding to their environment in different ways." 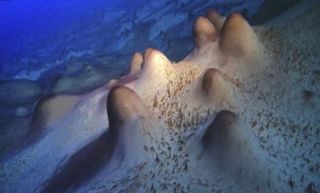 Other Antarctic lakes display variations on the theme. Instead of pinnacles, Lake Undersee has large laminated, conical stromatolites that grow to 0.5 m above the lake floor. These are dominated by Phormidium spp. In another site, Lake Joyce, the stromatolites are branched. Lastly, Lake Vanda undergoes periods of flooding, which permits to study the adaptation of the bacterial structures to change. The conclusion is that adaptation here is also a slow process. Glacial, you may say. But then, studying microbial behavior and its influence on the landscape (or "lakescape") may not be easy but is certainly rewarding. It sure can be counted on to provide exciting and illuminating information.