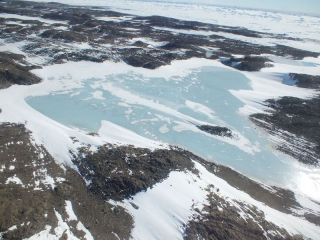 To a thermophilic Southern Californian with an anthropocentric bent like myself (I live in San Diego), life in the cold seems both implausible and disagreeable. I jest. I am aware that fish, insects, plants, and above all microbes can thrive in extremely cold climates and make use of a variety of strategies to overcome the harsh conditions. Certain fish resist sub-freezing temperatures by making proteins that serve as antifreeze. This lowers fishes’ freezing point by about 1°C. Using such antifreeze proteins, insects and plants can do even better than that, but it is microbes that win the prize. A number of bacterial species can grow at temperatures just under the freezing point or below. The champion for now seems to be a permafrost bacterium, Planococcus halocryophilus, which grows at –15° C. 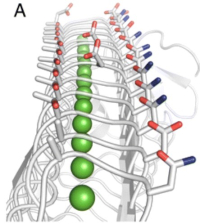 Some of these 'psychrophiles' secrete proteins that work by inhibiting recrystallization, a life-threatening process that results in large ice crystals being made from small ones. The action of the proteins results in the formation of liquid spaces in the ice that form networks of sheets and veins, which is where one can find thriving microbial communities. So, there is a lot of microbiology going in one of the most barren of environments. But one story of life in the cold stands out: there are bacteria from Antarctic lakes with a most unexpectedly life habit: they cling to the underside of ice!

The bacteria bind to the underside of an ice floe via a secreted long protein thread. It might remind you of a pilus, but this one is not visible by regular scanning electron microscopy, it is much thinner than regular pili. Yet, like many pili, it has an adhesive end that does the actual binding. 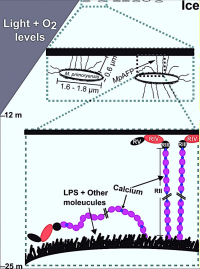 Figure 3. (click to enlarge) A cartoon of M. primoryensis in contact with the lower surface of lake ice. Top panel: oxygen content decreases with depth in the upper reaches (0–12 m), of Ace Lake in Antarctica whereas the lower reaches (12–25 m). are anoxic. Middle panel: the bacteria's flagella are represented as two squiggles on one end of the bacterium; MpIBP (referred to here as MpAFP. IBP = Ice Binding Protein, AFP = Antifreeze Protein, same thing) are represented by long filaments, some of which contact the ice. Lower panel: short thick lines on the exterior of the bacterium represent other surface molecules such as proteins and polysaccharides. Calcium rigidifies the junction regions linking each 104-aa repeat (purple sphere) are indicated by small blue spheres.
Source

This protein, called MpIBP, is a veritable Gargantua. Made by the Antarctic bacterium, Marinomonas primoryensis, MpIBP has the shape of long rod (think fishing rod), is a whopping 1.5 MDa in molecular weight, and is 0.6 µm in length, no less. MpIBP adheres to ice, thus can be called an adhesin. It is in fact the only adhesin known to do this. It consists of five domains (RI-RV). Its ice binding domain (RIV) is next to the distal tip and is a modest 34 kDa in size. This domain has a notable structure: it consists of 13 repeats that fold into a beta-solenoid with a flat face, just right for binding to the flat face of ice. Clone the gene that encodes this domain into E. coli to overproduce and purify the peptide, all by itself the pepticepeptide sticks to ice. Make antibodies against this region of the protein, and binding is specifically inhibited. The rest of the protein has 120 tandem repeats of 104-amino acid residues. MpIBP is related to giant adhesins, the so called RTX-repeat-containing proteins. This is a large protein family whose members have a wide repertoire of functions, including pore-forming toxins, proteases and lipases, and constituents of S-layers.

Now, you ask, why would bacteria want to cling to ice? The reason proffered is that the underneath of ice floes is a good a place for bacteria to grow in seemingly inhospitable places. Just underneath the ice is a region with higher concentration of oxygen and nutrients, and more light. In the Antarctic lakes that are permanently covered with ice (see a recent post), these regions are an ideal habitat for strictly aerobic organism such as M. primoryensis. The bacteria stick to the ice as long as it doesn’t melt. Note that being an ice-clinger confers an ecological advantage over the non-clingers.

How does this distinctive protein work? One of the labs reporting this work, Ido Braslavsky’s, is in Rehovot, Israel, near the balmy shores of the Mediterranean (the other one, Peter Davies’s, is in Kingston, Ontario, Canada, perhaps a climatically more fitting site). Using a device they call a microfluidic cold finger (described here), the authors measured the temperature of droplets containing M. primoryensis cells with great precision. They found that adherence to the ice crystals took place quite rapidly. Most of the cells in the droplet were bound within 20 minutes. Binding depended on the bacteria being motile. The bacteria are none the worse for adhering to the ice because they swim away once the ice is melted. The bacteria do something to the ice because the ice crystals tend to change from a circular to a somewhat hexagonal shape. Binding does not keep the bacteria from rotating using their flagella, suggesting that they are stuck at a single pivot. The authors posit that a chemotactic stimulus may be involved, but this has not yet been established. The authors further say: "The adhesion of M. primoryensis to ice may be the first step in biofilm formation… Biofilms are dynamic assemblages that take days to develop at room temperature, so the time frame for their development may be considerably longer at 0°C. Thus, it is not surprising that we did not observe clear interactions between individual bacteria." See movies of M. primoryensis binding to a single ice crystal in solution here. Bacteria are seen swimming freely and the crystal is slowly growing while bacteria are attaching to its surface. 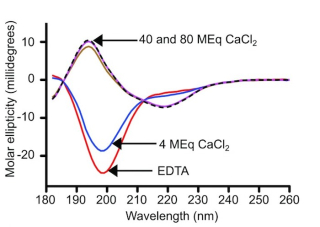 Figure 5. Circular dichroism analysis of the long region of MpIBP. Far-UV CD spectra of the region are plotted as molar ellipticity versus wavelength. The molecules resemble random coils in the absence of calcium are fully folded as a b-rich structure at the higher concentrations. See this paper for details and other biophysical measurements.

The MpIBP protein requires calcium for its function. The reason is that the monomers that make up the long part of the molecule require this ion for folding. Given calcium, the protein rigidifies and projects away from the bacterial surface, making contact with the ice possible. Calcium is likely to act extracellularly, that is, once the protein is secreted. Like other large RTX proteins, MpIBP exits the cell via a type I secretion system (TISS), whereby large proteins pass through membrane channels in the unfolded state. The authors hypothesize that this may be a general mechanism and that other large adhesins may also be dependent on extracellular calcium for folding.

Don't you agree that this is an exciting if unexpected story? It illustrates once again the skills of microbes in succeeding in implausible environments. No habitat escapes microbes (as long as there is free water around, I would guess). Doesn't such a coupling of unusual ecology with a satisfying molecular explanation give you a feeling that something is right with this planet? It does for me. 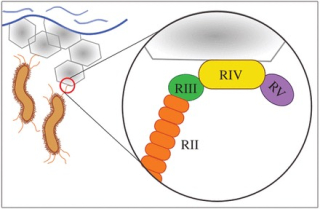 Figure 6. M. primoryensis stuck to ice via the business end of MpIBP. Sea ice is represented by the hexagons. An enlargement of the binding location at the C-terminal end of MpIBP shows MpIBP_RIV (yellow), the ice-binding domain, flanked by RIII (green) and RV (purple).