by the STC team | We take advantage of this being the season for rejoicing, and take our customary winter two week vacation. We hope that you have enjoyed the past year with us and that you will return as this blog begins the 11th year of its existence. We will endeavor to... Read more →

by the STC Team | In the days following the recent general election in the United States, more than 2,000 scientists signed an open letter addressed to President-Elect Trump and the 115th Congress. The letter addresses issues of great relevance to the scientific community and thus we believe that our readers will be interested in its full text... Read more → 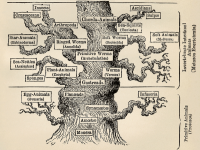 by Christoph Weigel | It's exactly 150 years since the picture considered in this post was published in the 'General Morphology of Organisms' by Ernst Haeckel (1866). "Phylogeny is the evolutionary history of organisms," explains Uwe Hoßfeld, co-author of a recent paper in Nature that celebrates this anniversary. "Because Haeckel was the first actually to define this term, in... Read more →

by Elio | We continue our custom of listing the posts from the last half year, lightly annotated. Read more →

by Elio | Mark O. Martin, who teaches at Puget Sound University, is one of the microbial world’s most passionate advocates. This is revealed in many of his activities, not the least of which is his blog... Read more →

by Elio | To a thermophilic Southern Californian with an anthropocentric bent like myself (I live in San Diego), life in the cold seems both implausible and disagreeable. I jest. I am aware that fish, insects, plants, and above all microbes can thrive in extremely cold climates and make use of a variety of strategies to overcome the harsh conditions. Read more →

In an acute infection, damage to tissues is usually due to a combination of factors made by the pathogen, such as toxins, and to an uncontrolled host response. Considering the huge parade of acute infections, which of the two do you think plays a greater role, generally speaking? Or can the two not be considered separately? Read more →