Do bacterial species really exist and why should we care?

by Kostas Konstantinidis and Roberto Kolter 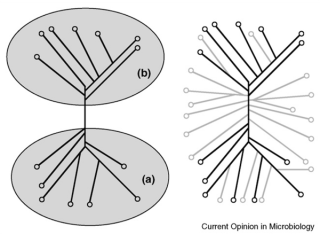 Fig. 1. A graphical representation of the species problem in bacteria. The phylogeny of a hy­po­the­tical collection of organisms that results into two clear groupings (a + b on the left) is shown. To designate such groupings as separate spe­cies (or genera, etc.), however, it is important to determine whether or not they include eco­lo­gi­cal­ly and phenotypically uniform organisms. For instance, when comparing evolutionary dis­tant­ly related organisms, groupings will almost cer­tain­ly be the outcome of the comparisons be­cause of the long evolutionary time since di­ver­gence but they are not necessarily informative about the homogeneity of the organisms they encompass. Another important issue is how well the collection of the organisms analyzed represents the total natural diversity, that is, by saturating sampling of natural diversity pre­vi­ous­ly recovered groupings might disappear (tree on the right). Prescreening of isolates, either due to the selectivity of the isolation me­thod or the requirement to conform to specific 'species standards' in order for an isolate to be further processed, could make collections un­re­pre­sentative of the naturally occurring diversity and hence, the potential groupings recovered meaningless. These issues are relevant to all di­versity surveys, particularly in cases where only a small fraction of the natural population has been sampled. Source

The second part of the question in the title of this post is relative easy to answer; the first part is much more chal­leng­ing. Defining bacterial species is not only an im­por­tant academic exercise but also has major practical con­se­quen­ces. For example, infectious disease diagnoses, re­gulations involving the transport of bacteria, and edu­ca­ting the public regarding bacteria that are beneficial to humans, animals or plants are all deeply-rooted in nam­ing bacterial species. It is important to know if a patient is infected with Bacillus anthracis (the nasty pathogen that causes anthrax) or, instead, infected with the much less virulent yet close relative, Bacillus cereus. Having dif­fer­ent names for these two species is key because the dis­eas­es they cause are very different and are treated very differently. We cannot afford to mistake B. anthracis for B. cereus. Thus, the long held practice in microbiology of naming species serves important functions. But do those named species really reflect biologically discrete species?

How might we be able to determine if bacterial species really exist? It turns out this is a particularly challenging question. Ideally, a species is a collection of individuals that are much more uniform among themselves, ge­ne­ti­cal­ly and/or phenotypically, compared to other col­lec­tions of individuals. For humans and higher eukaryotes, species are relatively easy to define morphologically. How­ever, morphological traits are not useful as criteria to distinguish bacteria. Many distinct types of bacteria look the same under the microscope. Of course, these days there is a much better way to type bacteria: com­par­ing whole genome sequences. This is a much more sensitive approach for defining similarities and dif­fer­en­ces among organisms in general since their entire phe­no­typic potential is encoded in that DNA sequence. Indeed, humans can be distinguished from their closest primate relatives, the chimpanzees, by ~1.5% dif­fe­rence in the average nucleotide identity (or ANI) of the ge­nes they have in common, i.e., the ge­nes are 98.5% identical at the sequence level, on average. Importantly, the genome sequences of humans do not vary anywhere as much among themselves and neither do those of chimpanzees. Thus, human and chimpanzee genomic sequences dis­tri­bute into two discrete and well-separated populations. The distribution of the genome sequences can thus be used to define the species. Whether populations of bacteria distribute into similar dis­crete groups based on their genome se­quences remains unclear.

The recent dramatic increases in the speed of DNA sequencing have resulted in several thousand complete bacterial genomes sequenced. When these genome sequences are compared, discrete groups of closely related genomes that might be reflective of species are not always apparent. In­stead, bacterial genome sequence diversity of­ten seems to form a continuum, with no clear spe­cies boundaries (Figure 1). For example, the available genomes of isolates of B. anthracis and B. ce­re­us can, for the most part, be separated by 2 – 3% difference in ANI, similar to the human-chim­pan­zee pair. However, when we sequenced hundreds of environmental isolates, we ob­tained se­ve­ral genomes that showed intermediate levels of nucleotide sequence identity, falling some­where in-between B. anthracis and B. cereus, blurring the species boundary. Several similar ex­am­ples from other named bacterial species have recently been reported as well (Figure 2). 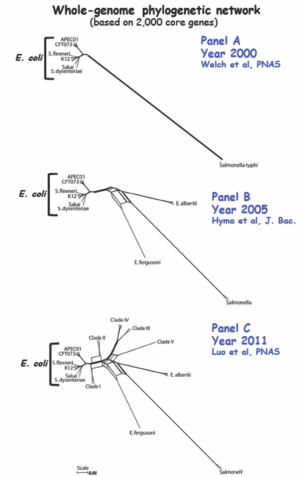 Fig. 2. (click image to enlarge) A real example of the species problem in bacteria. Where do we draw the line to define E. coli based on this phy­lo­ge­ne­tic tree? Note that the (named) E. coli cla­de becomes less distinct, i.e. there is no clear se­pa­ra­tion from its close relatives Escherichia al­ber­tii, Escherichia fergusonii and Salmonella, as more genomes were sequenced. Genome se­quen­ces became available by the studies in­di­ca­ted on the right. Source: K. Kon­stan­ti­ni­dis.

There is another confounding factor that makes defining bacterial species boundaries difficult: bacteria are very promiscuous in exchanging DNA. Such horizontal gene transfer can result from uptake of bare DNA (trans­for­ma­tion), transfer of DNA from cell to cell using specialized machineries (conjugation) or the result of infection by bacterial viruses (transduction). The genes exchanged frequently confer key phenotypic traits such as antibiotic resistance or virulence (e.g. anthrax toxin). Thus, defining species based on important diagnostic phenotypes is of­ten not reliable because these traits can be present in isolates with different species names.

So, how are bacterial species defined in practice? Due to the complications described above, there is currently no natural, widely accepted definition for bacterial species. Instead, species are defined based on some rather ar­bi­tra­ry thresholds for phenotypic and/or genetic similarity that attempt to capture as much as possible the phe­no­types that are relevant for humans, such as causing a specific disease in humans or animals. A frequently used threshold is that strains of a species should show ≥95% ANI among themselves and <95% ANI when compared to strains from a different species. (A technique used before whole genome sequencing became widespread was DNA-DNA hybridization and the species cutoff was ar­bi­tra­ri­ly set at 70% hybridization; 70% DNA-DNA hy­bri­di­za­tion translates precisely to 95% ANI in genomic sequence data) By performing hundreds of comparisons during the last three decades, it was found that this threshold groups together strains that are sufficiently similar to each other phenotypically (e.g. causing the same disease in animals or carrying the same function for an ecosystem) to merit being named as a distinct species. Therefore, the current de­fi­ni­tion for species is operational, and, it should be not­ed that, it has served the scientific and cli­ni­cal communities reasonably well. Nonetheless, this ap­proach has two big problems. First, the thresh­old is clearly arbitrary. Why use 95% at the cutoff? Why not 96%, or 99% (as in the human vs. chim­pan­zee example) or even 90%? Second, applying the 95% ANI threshold to Primates will result in a single species that includes humans, chim­pan­zees and all monkeys. The 95% threshold may be too liberal. As a result, inaccuracies in infectious disease diagnosis and other mis­un­der­standings and miscommunications are not rare. And there is another big problem. The current spe­cies definition does not answer a fundamental question: Do biologically relevant bacterial species exist? 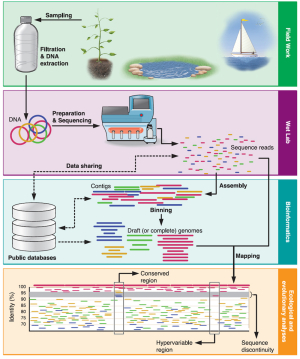 Fig. 3. (click image to enlarge) Schematic of the metagenomic pipeline to identify sequence-dis­crete populations. Reads from metagenomic se­quencing of microbial community DNA can be assembled into consensus genomic sequences of cells belonging to the same population. Contigs originating from the same population can be identified based on their sequence cha­racteristics and then grouped into nearly closed draft population genomes (binning). When the original reads of the metagenome are mapped against the contigs of a reference population (re­cruitment analysis; bottom), it becomes ap­parent that each population is sequence-dis­crete compared to its co-occurring populations. In this hypothetical example, reads originating from members of the reference population (red) evenly match the assembled contigs that represent the population with high nucleotide sequence iden­tities (>97%). In contrast, reads from other populations (other colors) match the reference contigs at lower sequence iden­tities, forming a sequence discontinuity (“gap”) in the recruitment plot. Areas that deviate from this pattern are limited to highly conserved re­gions of the genome (e.g., rRNA operons), whe­re reads from related but distinct populations are recruited due to their highly sequence iden­tity to the reference sequences, or regions cha­rac­te­rized by intrapopulation heterogeneity, which typically show lower coverage. Source

Perhaps in looking for bacterial species, we've been "bar­king up the wrong phylogenetic tree!" One key limitation in deriving the currently used thresholds for species is that the results were based on comparisons of strains that almost invariably were isolated from a variety of ha­bitats and sources. For example, the available Escherichia coli strains used to compare their genomes (e.g., Figure 2) originated from diseased and healthy hosts as well as diverse environmental sources such as freshwater and soil. It is likely that different E. coli strains represent dif­ferent ecological niches and therefore may contain genes that confer selective advantages for survival in the par­ti­cu­lar microenvironments from where they were isolated. Comparing such different organisms to derive the cur­rent­ly used species thresholds may have been a mis­guid­ed approach that hid natural ecologically driven species boundaries.

The advent of metagenomics, i.e., high-throughput DNA (and RNA) sequencing in the absence of cultivation, of­fers the capacity to fully characterize natural bacterial populations. In this way the total genetic and functional diversity in a sample can be determined. The workflow involved in such an analysis is described in Figure 3. Such complete characterization of natural populations over time and space has already provided insights into how populations evolve and speciate and thus has hel­ped advance the definition of bacterial species.

A very striking population pattern emerges from nu­me­rous metagenomic studies. Within natural microbial communities bacteria and archaea distribute into dis­crete populations with high genomic sequence re­la­ted­ness. Typically these discrete populations share 95-100% ANI. Importantly, these populations are indeed discrete because they usually have <90% ANI when compared to other populations within the same community. We refer to these highly related populations as being "sequence-discrete". Interestingly the genotypes of members of a sequence-discrete population are typically more uniform in terms of evolutionary relatedness, functional gene content and gene expression patterns than the genotypes of members of species that have been identified and named by traditional microbiological criteria.

These sequence-discrete populations appear to be the closest we've come yet to defining eco­lo­gi­cally and evolutionarily relevant bacterial and archaeal species. These results may constitute a pa­radigm shift since many scientists hold on to the idea that microbes do not form distinct species due to their extensive genetic exchange. The metagenomic findings are preliminary and certainly more datasets need to be analyzed for more robust conclusions to emerge. Nonetheless, these findings have brought a lot of excitement to microbiology because the discovery of sequence-dis­crete populations in natural microbial communities represents a foundation for future studies on how individual populations evolve and respond to environmental perturbations. Maybe bacteria do form distinct species after all and we just needed to change the "lens" we had been using to de­tect and track them over time and space. Now we may be barking up the right tree! 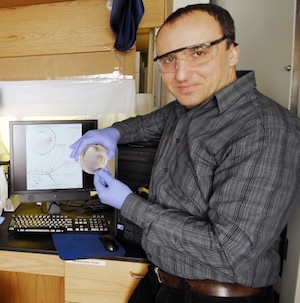 Dr. Kostas Konstantinidis is an Associate Professor as Georgia In­stitute of Technology. He received his BS in Agriculture Sci­en­ces from the Aristotle University of Thessaloniki (Greece), his PhD in Microbial Ecology at Michigan State University working with James M. Tiedje and did post-doctoral work at MIT Edward DeLong. His research interests are at the interface of genomics and computational biology in the context of microbial ecology with the overarching goal to broaden understanding of the ge­ne­tic and metabolic potential of the microbial world.