Editorial note: We reprint this article by permission of the author. It first appeared on August 27, 2014, in his blog, The Echioblog. We have a long-standing fascination with this topic and have previously posted a piece about it here. 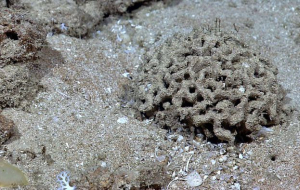 Figure 1. Xenophyophore from the Gulf of Me­xi­co. NOAA photo library

So, following up with all of the NOAA deep-sea Okeanos Explorer stuff, I've found that I am just fascinated  by these things called xenophyophores! The name means "Bearer of foreign bodies" and a 'portrait gallery' is found here. But what are they? To put it simply, they are giant, deep-sea amoebas that live in large, sediment "hous­es" called "tests" (similar to the way that echinoderm ske­le­tons are also known as tests).

Footnote on the classification: a quick survey of the va­ri­ous Protist classifications tells me that even calling these organisms "amoebas" is probably incorrect. But the nu­an­ces of this dynamic are for another day. This one group, the xenophyophorea live in the deep-sea ... deep in the deep-sea! Xenophyophores were observed as deep as 10 km (over 6 miles! ) in the deepest of marine trenches (the Mariana Trench ) and occur in almost all of the world's oceans (ex­cept the Arctic ). They are considered among the world's largest living single celled organisms. 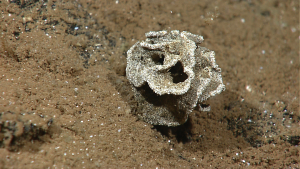 Figure 2. A xenophyophore from the Galapagos Rift. NOAA photo library

Xenophyophores create these large tests which they in­ha­bit. The tests come in a variety of forms. There are 42 known species in 13 genera. As I understand it, xe­no­phy­o­pho­res are considered as a subgroup within the fo­ra­mi­ni­fe­ra (these are amoeba-like unicellular organisms with tests).

Here's a variety of xenophyophore tests spied by the Oke­­anos Explorer (Figures 1 + 2)... but other patterns in­clude big leafy structures and more network-like arrays of tubes. They vary quite a bit.

Here's some fun facts!  Several different sources including the 'Paleoecology and Ecology of Xe­no­phy­o­pho­res' by Lisa Levin and others cited below.

1. How Big Are They?  So, here's the thing. I've read plenty of accounts that jump to the con­clu­sion "These are the monster amoebas!" But what a lot of these accounts seem to forget is that the large sizes considered by a lot of popular accounts are the tests (i.e., the skeletons). To be sure, these structures can be pretty big (for something made by amoebas! ) The example below is ap­par­ent­ly about 20 cm (almost a foot! ) across! (Figure 3) 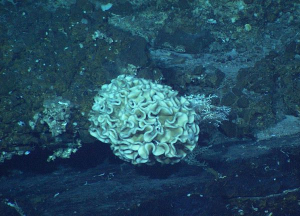 Most of the accounts I've read sort of assume (and I sup­pose this is reasonable ) that the animal inhabits all of the test all the time, or perhaps with pseudopods or ten­tacles extended throughout? Frankly, none of the ac­counts I read could clarify how much of the test the ac­tu­al organism inhabits. However, One estimate indicates that the test volume might be as little as 1% "pro­to­plasm" (which if I understand the terminology includes cy­to­plasm, etc.). So, the actual organisms are probably not as monstrous as some folks would think. I would imagine it's quite difficult to measure an amoeba for something like this.

2. What Do They Eat?  So, when you think of big deep-sea amoebas, perhaps automatically we think "Oh wow! Wouldn't it be neat if they actually could eat animals?" Just like in the movies?  And in truth, there are marine amoebas which probably devour animals, but to date very little evi­den­ce is available on the full range of what xenophyophores actually eat. And the truth is sadly not li­kely to be as romantic as some would think. 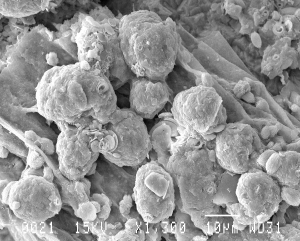 One paper by Laureillard, Mejanelle and Sibuet from 2004 studied the xenophyophore Sy­rin­gam­mi­na corbicula. The xenophyophores were found enriched in triacylglycerols, energy storage lipids in animals, and contained a higher level of bacterial fatty acids than those in reference se­di­ment. Their study showed that bacteria were present on S. corbicula in great abundance.

Xenophyophores have strings of mucus which are de­ploy­ed along the test which build up feces and sediment called stercomes. It was suggested that a flora of these bacteria is present in abundance on these mucous threads. Perhaps being farmed and being utilized as a source of food. Their mucous threads also are constantly pulling and trapping particles from the surrounding area, presumably in part to provide further nutrition. Figure 4 shows an Scanning Electron Microscope Image of a stercome showing up close details of what's on them. There seems to be a heavy de­pen­den­ce on poop and other "marine snow" that falls to the bottom as well as bacterial/microbial growth. But very little is known about feeding in xenophyophores, so who knows what else they do?

3. What are those structures (tests) made of?  The tests on Xenophyophores are made up of a patch­work of different bits. Sediment, but also the shells of other marine organisms such as ra­di­o­la­ri­ans, other foraminiferans, and so on...

The test is the outer "crunchy" layer... Within the test are a series of tubes called granellae, through which the animal's cytoplasm, etc. flow through. These tests are actually an important part of the xe­no­phy­o­pho­res' ecological role, as they provide habitats and such.

4. Ecology!  Probably the most interesting thing that I've picked up about xenophyophores? It's how potentially important they are to deep-sea ecosystems. Xenos are very abundant in the deep-sea, sometimes reaching up to 2,000 per 100 square meters! Lisa Levin published this neat paper in 1991 about their roles in deep-sea communities. Basically it turns out that where xenos are found, there are hotspots of animal diversity. 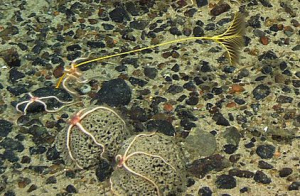 The pic to the right shows two big xenophyophore tests with brittle stars on them (Figure 5).

Why might a cluster of xenophyophore tests represent a hotspot of animal diversity? They apparently present both food and habitats for a plethora of deep-sea ani­mals! Examples of how animals use these tests? Here you are:

5. Mystery fossils: xenophyophores?  So, one of the aforementioned articles by Levin on xe­no­phy­o­phore paleoecology makes the case that tests and other modern examples of sediment struc­tures by these organisms can explain various trace fossils, and other mysterious fossil struc­tures. 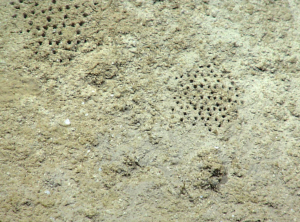 Perhaps one of the best known is that of the fossil ich­no­ge­nus Paleodictyon (like an organism name but for a tra­ce fossil ) ! Paleodictyon was famously studied by oce­a­no­gra­pher Peter Rona who made it an obsession of his ca­reer. It has been covered by many other natural history blogs such as this and this. Basically, a trace fossil which looks like this (Figure 6). This is seen throughout the deep-sea in many places. The image is from the Gulf of Mexico but its been seen throughout the deep-sea, some­times as deep as 3700 meters!

It's also been seen in the fossil record dating back to the Paleozoic.  The parallel and similar appearance has led to much debate over whether the same type of organism has created these patterns in the sediment, namely, did a xenophyophore or something similar create them?  And anyway, there's a lot more on them in this regard and there seem to be more questions than answers. A neat group of critters! (can I use that for amoebas? ) 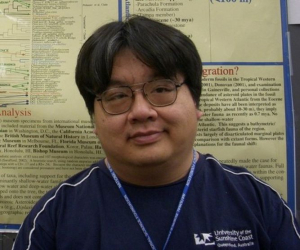 Chris Mah is an invertebrate zoologist and echinoderm re­sear­cher at the National Museum of Natural History, specializing in sea stars (aka starfish or asteroids). He has an appreciation for weirdness and loves the adventure of discovering new starfish and understanding their stories.