Today, I deviate from STC's habit to present in our Pictures Considered series one of the "visual highlights" of biology – iconic drawings, sketches, photographs, autoradiograms or electron micro­graphs that convey as much insight as lengthy texts (at least for those contemporaries equipped with more strongly developed visual perception ). 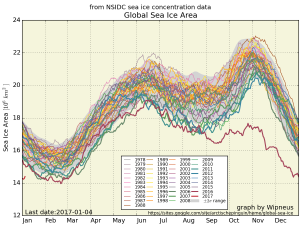 (Click to enlarge ) Figure 1. Compiled by con­tri­butor Wipneus to the Arctic Sea Ice blog (not an of­ficial source, but accurate acc. to LePage). Source

So, you may have seen a diagram showing the shrinkage of the arctic sea ice over the last decades that appeared in the media a few weeks ago. And you may have noticed immediately the unsettling development in 2016 by just looking at this diagram (Figure 1) without having to read the discussions about whether this is a clear indication of climate change or just some crazy weather extreme. No, I'm not going to join the discussion here on whether ex­treme weather conditions are a consequence of climate change – as many climate scientists agree upon – or just that, crazy. My point here is rather that for a fact-based serious discussion this diagram is only semi-helpful. How come? The diagram follows all established and well-foun­d­ed rules for presenting diagrams in cartesian co­or­di­na­tes. The scaling is fine as one can see all the data (not the case in quite a few peer-reviewed pa­pers ). Both axes are properly labelled and graded in a meaningful way. But René Descartes is not compatible with 'big data', the diagram is drowned in numbers and therefore almost in­com­pre­hen­sible. Despite the differential coloring of the data curves for individual years, tendencies over the years cannot be detected in the mess of curves. As if the author were aware of this he chose to indicate a ±2σ (= 2 standard deviations) area by light-grey shading but this doesn't substantially help to "read" the development over the time period 1978 – 2017. Being able to discriminate bet­ween tendencies and 'crazy outliers' would be necessary for serious discussions.

Enter one Kevin Pluck – a younger informatician from UK, as I learned – to the rescue of Descartes. He has, ap­par­ent­ly, a strong sense for UI design and wrote a not-really-difficult script for converting the NSIDC sea ice con­cen­tra­t­ion data into the animation shown in Figure 2 (Click on the Figure to start the animation ). For those of you who still know how to read analog clocks, the po­si­tio­n­ing of the months of a year "clockwise" on a dial is self‑ex­pla­na­to­ry. But it should pose no problem for digital natives. Shifting the Y‑axis from the left side (Figure 1) to the center and showing it as properly labelled con­cen­tric circles makes the increase/decrease of sea ice co­ver­age in the arctic visible as contiguous area rather than as area under curves, which is way more intuitive (although showing actual geographic areas is not intended ). You see at a glance that the polar ice had it's largest winter maximum in Nov/Dec1989! Finally, as you would need to discuss the development over time, the "years" are shown right in the center of the animation. That's close-to perfect. One could only wish bioinformaticians would develop visual re­pre­sen­ta­tions of their complex data sets from any-omics studies in similar ways, to let the readers in­ter­ac­tive­ly explore the whole and the details simultaneously (I admit I can learn virtually nothing from a static 2D visual summary of protein-interaction studies ).

Why is it desirable to 'rescue' diagrams in cartesian coordinates in the age of big data? They're much easier to read than tables, so they're perfect for the experimenter during measurements of any kind. And they are the perfect basis for discussion among scientists: when you get lost in words and arguments you can always come back to the diagram. They're familiar to all prac­ti­tio­ners of natural sciences, which allows easy communication across disparate fields. And, lastly, they are perfect for expressing mathematical relations without resorting to arithmetic with heaps of formulas (something many biologists prefer ).