The bad teacher's words fall on his pupils like harsh rain; the good teacher's, as gently as dew.
– The Talmud

Typical of old folks, my mind readily wanders back to events in earlier days. High on the list of me­mories that pop up is that of my very first lecture. It's one that I gave to medical students, the year being 1962 or 10 years after Watson and Crick. Imagine the thrill. Sure enough, I prepared the lec­ture as if I was going to disclose the innermost secret of life (an outlook that was widely held, not the least by W&C!). I thought it went quite well. But I soon got my comeuppance. A student from the class got into the elevator with me and breathlessly said: "Doc, can I ask you a question?" "Of course, of course..." He blurted out: "Doc, what's good for dandruff?" So much for the sublime. 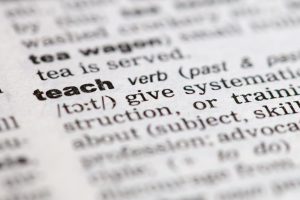 My theme, however, is not just to bring up a half a cen­tu­ry-old recollection but rather to make a point. As a crisp new faculty member, I had been told to give lectures – period! That was the total of my instructions. I received no hints about what to include, how to prepare it, how to deliver it. Nothing. My boss was well-meaning and had an abiding interest in the students, so it was not a case of in­difference. But in those days, it was assumed that if one had gotten an academic appointment, one must know how to deliver a lecture, as if it was something that came with mother's milk.

Seen through the lens of today, this may seem preposterous but I believe that it was the norm of the time. I haven't researched the historical point, and surely there were exceptional cases, when a new faculty member was taken aside by an experienced colleague and shown the basics of lec­tur­ing. But I never ran into one. Rather, requiring such help could well have been taken as a sign of ineptitude or something.

Years later, when we found out that one of our medical students had been previously an ac­com­plished actor, we asked him to tell the faculty how to lecture. It was an utter revelation. He taught us about the need to achieve 'command over the environment,' that is, figure out where the chalk, the eraser and the light switch were, etc.. He then went over the need for having a clearly stated purpose of the lecture, including an outline one should refer to often, the suitable tempo of pac­ing, and many other obvious-sounding bits of strategy. He reminded us to avoid uttering dis­cour­te­ous babble as: "Let's see what's on the next slide." His presentation was considered extremely helpful. I couldn't help thinking how much I would have profited from hearing it at the beginning of my teaching career.

You may ask, did I eventually mend my ways and did I later extend a helping hand to incoming young faculty on how to lecture? No, I didn't, to my lasting shame. It plain didn't occur to me, nor, I guess, to others around me. As with my first boss, it wasn't that we didn't care about our students. On the contrary, providing high quality teaching was very high on our list of departmental pri­o­ri­ties. But how to teach was just not part of it. Doesn't this sound absurd?

How about now? I don't know how far the old assumptions have been substituted by clearer think­ing, but I certainly hope that they have. It now seems obvious that there is need to discuss the ele­ments of lecturing with a new colleague and to offer to attend some of the lectures for the purpo­se of extending thoughtful comments. I understand that graduate students are now exposed to teaching methods and have greater opportunities for honing their skills. I wonder how widespread the practice is and how many shapes and forms it has taken. How about post-docs, who may be nearer to the beginning of their teaching career? Surely there are many modalities that are being tried and implemented.

Let's keep in mind that the early days in the life of a fresh professor are among the most de­man­ding. Stanley Falkow, one of the great teachers our field has seen, has related the terror of his first teaching experience in this blog. A little help can go a long way towards making it easier.

I would appreciate hearing from young and old regarding the help they received (or not) when star­ting out in this wondrous endeavor.