Sex and the Single Pillbug 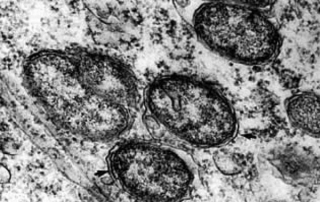 You may not think of sex as having a microbial basis, but it does. That is true for many invertebrates that are co­lo­ni­zed by the endosymbiotic bacterium Wolbachia. Mem­bers of this genus are probably the most common ob­li­ga­te intracellular bacteria on Earth and, for reasons dis­cus­sed below, among the most remarkable ones. They infect half or more of all insects, as well as isopods (crus­ta­ce­ans), spiders, and even worms. In some of their hosts, they influence how sex is determined, making sex itself a sexually-transmitted affair.

Wolbachias include several differing 'supergroups' that embrace who knows how many species. Their genomes give signs of flux. Despite being quite small (around 1 Mbp), about 15% of their genes consist of mobile elements such as transposons and phages. Wolbachias are alpha‑pro­teo­bac­te­ria, closely related to disease-causing strict intracellular bacteria, the Rickettsiae, Ehrlichiae, and Anaplasmas. For ideas about how these organisms evolved, see here.

In arthropods, wolbachias have evolved complex acrobatics to manipulate the sex of their host. Wolbachias spread from mother to offspring. This is not surprising because, although their pre­ferred locations are the ovaries and testes, they are found only in mature eggs and not in sperm. So, only mothers can endow their brood with wolbachias. The story becomes convoluted because wolbachias kill the male babies (see here), thus altering the sex ratio of the population. The lone females must resort to parthenogenesis to reproduce. In addition, uninfected females produce about four times as many eggs as the uninfected ones. The reasons for this increase include in­hi­bi­ting apoptosis, a normal step in regulation of egg production in insects like Drosophila. All this is to the good of the insects because Wolbachia-infected flies have greater fitness, as seen by their enhanced resistance to viruses and insecticides. Being so endowed, wolbachias are being con­si­de­red as a tool for controlling insect vectors such as the mosquitoes that carry the viruses of Dengue or Zika. 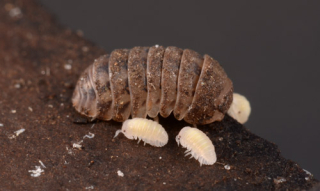 A recent report  to this already intricate Wolbachia sex story from the lab of Richard Cordeaux at the University of Poitiers, France, adds yet another feature to the story. The investigators found that in pillbugs wolbachias have triggered the evolution of a new sex chromosome. Pillbugs, to remind you that they piqued your curiosity when you were young, are those roly-poly bugs that roll themselves up into a ball when threatened. It turns out that they also have a complex sex story to tell. What are pillbugs? You may think they are insects, perhaps close to the beetles. Not so. They are isopods – crustaceans – thus phylogenetically closer to lobsters than to insects. Their genus name is Armadillidium, given because, with some imagination, they could pass for mini-armadillos. Their sex is also closely intertwined with the activities of Wolbachia.

The story of the determinants of sex, the sex chromosomes, is far from simple. We are used to the idea of having X and Y chromosomes, but there are considerable variations on this theme. Pillbugs for instance also have two sets of sex chromosomes, Z and W, but are backwards from our XY set-up. Here the females carry the sex-determining chromosome. ZZs are males, ZWs females. As with the insects, wolbachias are transmitted via the female pillbugs only, but with a wrinkle. Male embryos infected with Wolbachia are 'feminized' due to interference with the production of a male hormone. Thus, these individuals are genetically male (they carry the ZZ chromosomes) but phenotypically female. Here, the W chromosome is no longer relevant and it disappears from the population, which now becomes all ZZ. You would think that when pillbugs lose their Wolbachia, they will revert to maleness. Not so: it has been known for about 30 years that some of these re­ver­ters carry neither the wolbachias nor the W chromosome. How can ZZ Wolbachia-less pillbugs be female? 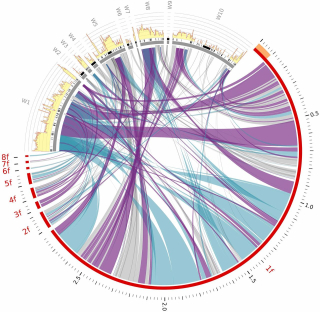 The researchers who discovered this phenomenon in the 1980s thought that these pillbugs had somehow ac­qui­red a feminizing component, which acts in the absence of Wolbachia. They called this the 'f-element.' With modern methods, the Poitiers group could determine that the f‑element consists of a set of Wolbachia genes. They mapped over 600 million sequencing reads from cul­ti­va­ted pillbugs and found that 0.11% of the reads were possible Wolbachia genes. After assembling them into genome scaffolds, they concluded that the feminizing message is a 3 Mb insert practically identical to genes of Wolbachia. This insert is found in the nucleus, in what amounts to a novel chromosome and not in the genome of an endosymbiont. As expected, the f-element is he­mi­zy­gous and is transmitted via the mothers. The authors point out that the f-element has undergone numerous rearrangements since it was acquired from a now lost Wolbachia and that this took place relatively recently.

We are used to thinking that our sex chromosomes arose by one or more mutations in an X chromosome to be­come the Y chromosome. But the pillbugs have evolved a microbe‑dependent mechanism to organize their sex and went even further, reducing the contribution of the microbe to just some of its genes.

Before leaving the subject, let me mention as an aside that wolbachia's influence other phe­no­me­na than sex detemriantion, including some that are directly relevant to humans. For instance, some wolbachias are pathogenic to humans when they infect the worms that cause river blind­ness and elephantiasis. The reason is existential: the endotoxin or lipopolysaccharide of their outer membrane (they are gram-negative) is responsible for the inflammatory responses that lead to the lesions, something we discussed here. Consequently, these diseases can be treated with antibacterial drugs, something that would not be expected to work in an infection caused by worms. In addition, these bacteria have a mutualistic relationship with their worm host, so killing them would result in death of the worms as well.

(click to enlarge) Figure 4. Evolutionary scenario for Wolbachia-mediated turnover of sex chro­mo­so­mes in the common pillbug A. vulgare. In the background of an ancestral ZW he­te­ro­ga­me­tic system (Left), acquisition of feminizing Wolbachia endosymbionts resulted in loss of the ancestral W sex chromosome and evolution of cytoplasmic sex determination (Middle). Sub­se­quent integration of a Wolbachia genome piece carrying feminization information (f ele­ment) in an autosome of the pillbug genome (A) and secondary loss of Wolbachia en­do­sym­bi­onts resulted in the evolution of a new ZW he­te­ro­gametic system (Right). Source

Does this elegant work on the pillbugs unquestionably prove that the insert carries the feminizing genes? More work is required. As the authors say: "We acknowledge that a definitive demonstration of the feminizing nature of the Wolbachia insert will require functional validation; however, owing to the large number of potentially functional genes that it contains, at present we are unable to perform such experiments." Still, the available data strongly suggest that bacterial endosymbionts plays a key role in sex determination. To the adage that 'germs cause disease,' we can add 'germs change sex.' Go tell that to your grandkids!