If biology would have to rely solely on homology studies to understand HGT (as described in the first two parts of this series ) even the most startling cases could be dismissed as just-so stories, as highly improbable 'ac­cidents' in the past, or even as flaws of statistical analyses (for example by faulty parameter set­tings ). Fortunately, HGT can be – and actually is – studied via experiments. When McCarthy et al. inoculated the skin of gnotobiotic piglets with a co‑culture of human-adap­ted (HA) and pig-adap­ted (PA) strains of a Staphylococcus aureus lineage they found exchange of plasmids and propha­ges as early as 4 h after infection (see Sean Kearney's earlier piggy-post in STC here ). The re­sear­chers monitored the co-evolution of both strains during colonization over a period of 16 d by ge­nomic se­quencing and found a preferred direction of transmission, from the PA strain to the HA strain. The two prophages of the PA strain were found either independently or jointly in isolates of the HA strain at their cognate positions and, in addition, at novel positions. Al­so in several cases, the prophage genomes had undergone recombination with each other (phage genomes are no­torious for their mosaicism, so this is a perfect 'live' example for when and how this works ). Al­though the study of McCarthy et al. allows for a rough estimate of the extent to which HGT is involved in adaptation of bacterial strains during co‑colonization of a novel niche, and to which extent phages play a crucial role in adaptation, the actual mechanism of how transduction 'wor­ked' in this case had not been resolved.

HGT as it happens 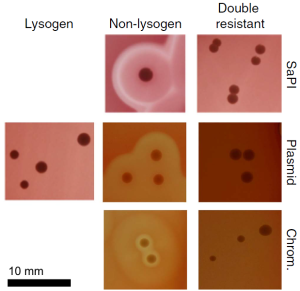 Enter Haaber et al. who addressed exactly this latter ques­tion in a recent study. They asked, which antibiotic re­sis­tan­ces would be exchanged between differently 'tagged' Staphylococcus aureus strain pairs upon co-cultivation for 24 h in liquid medium. One strain, designated 8325-S, was a triple-lysogen (φ11, φ12, φ13), resistant to strep­to­mycin (rpsL=StrR), and phenotypically non-haemolytic (due to up-regulated SigB and SarS activities ). The other strains were streptomycin-sensitive (rpsL+=StrS) de­ri­va­tives of 8325‑S that were non‑lysogenic (cured for the prophages ), and carried either a chromosomally en­cod­ed resistance to erythromycin (EryR, 8325‑4chrom), or carried a non-conjugative plasmid conferring chlor­am­phe­ni­col resistance in (CamR, 8325-4plasmid), or carried a tetracycline resistance within the easily mobilizable pa­tho­ge­ni­ci­ty island SaPIbov1 (TetR, 8325‑4SaPI). To allow for discrimination of the strains in plate assays following the co‑cultivation step, the 8325‑4 strains had the wild-­type haemolytic phenotype (normal SigB and SarS levels ) and could thus be easily discriminated from 8325‑S. In this setup, gene transfer was detectable after co-cultivation of the strains by the presence of two antibiotic resistances in a clone. Indeed, Haaber et al. found such double-re­sis­tant clones at high rates: 10‒3 for TetRStrR, 10‒4 for CamRStrR, and 10‒6 for EryRStrR. Surprisingly, all doubly-resistant clones had a non-haemolytic phenotype, meaning they were 8325-S cells that had taken up the resistance-conferring genes (Figure 1).

This result indicated that gene transfer occurred almost exclusively from the non-lysogenic 8325-4 strains to the lysogen 8325-S (within the limit of detection, which was a safe 10‒9 in their case ). Al­though varying in efficiency, all three resistance genes in different genomic contexts (chromosome vs. mobilome ) in the 8325‑4 derivatives could obviously be transferred. They applied a battery of controls to make sure their results were in fact due to phage-mediated generalized transduction. Suffice it to say here that they did not observe gene transfer to a recombination-deficient (recA‒) 8325-S strain, and not when the Ca2+ ions in the growth medium (required for efficient phage in­fec­tion ) were masked by adding citrate during co‑cultivation. Addition of DNase to the growth me­dium had, on the other hand, no adverse effect on gene transfer. This excluded the possibility that DNA released from the phage-sensitive 8325-4 cells after being lysed by phages released from the lysogenic strain 8325-S was taken up via natural competence by non-induced 8325-S cells. 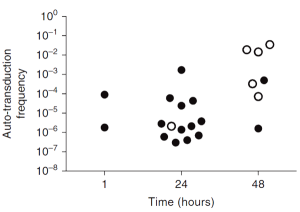 Figure 2. Auto-transduction (AT) occurs in an in vivo infection model. AT frequencies recorded over time during coinfection of G. mellonella lar­vae with 8325-SR and 8325-4 SaPI. At each ti­me point, 20 larvae were sampled and total CFU and triple-resistant colonies were determined from the haemolymph. The calculated fre­quen­cies are shown for the larvae in which AT was observed. Filled and open symbols represent living and dead larvae, respectively. No AT was ob­served in the inoculum used for infection; when lysogenic bacteria were substituted with a phage-cured derivative (JH978); when the non-lysogenic strain was substituted with 8325-4 not carrying an antibiotic resistance marker or when larvae were injected with a PBS control (detection limit = 2x10‒9). Source

Haaber at al. wished to see whether their highly artificial 'test-tube system' for gene transfer involving phage trans­duction could have any relevance in a more realistic set­ting. For this, they infected Galleria mellonella wax moth larvae, a commonly used virulence model for S. aureus, with a 1:1 mix of 8325-SR (StrRRifR) and 8325-4 SaPI (TetR). They monitored the numbers of bacteria in individual larvae, (many of the larvae were killed by the infection ), over a period of 48 h, and determined the fraction of triple‑resistant S. aureus clones arising from gene trans­fer. They found such triple-resistant clones as early as 1 h after infection in 2 of the 20 larvae sampled, and at 24 h their numbers and frequencies in 13 (!) of the 20 sampled larvae came close to the 'test tube' experiments (Figure 2). They conclude that "phages can mediate the extensive transfer of genetic material between such closely related S. aureus strains during in vivo colonization and this adap­­­ta­bility is key to S. aureus' success as a colonizer".

To explain the mechanism by which the directional gene transfer occurred in their experiments from the non-ly­so­ge­nic strains to the lysogenic strain (which is rather coun­ter­intuitive, even for phage aficionados accustomed to hair‑raising surprises ), Haaber et al. propose an elegant model that they call 'autotransduction' (Figure 3). Here is how it works. In a culture of a lysogenic strain there is always a low percentage of cells in which the prophage is induced (enters the lytic pathway ), either stochastically or by some inducing agent (general cell stress activating LexA, H2O2 for Stx phages, addition of mitomycin C by experimenters, UV light ). 'Induced' cells lyse and each one re­leases 50 – 100 virions (the infectious phage progeny, numbers vary with phage type and growth con­ditions ) into the medium. The released virions cannot productively infect other cells of the ly­so­ge­nic strain in the culture (super-infection immunity, see below ) but can infect any co-cul­tured non‑ly­sogenic cells that express the cognate phage receptor (usually the case when co‑cul­tur­ing closely related strains ). An aside: no direct cell-to-cell contact is involved here as during con­jugation. Upon infection, these non-lysogenic cells (now 'host' cells, literally ) are either converted into lysogens themselves (phage integration at the chromosomal att site mediated by the phage‑en­coded in­te­gra­se, site-directed recombination ) or doomed when the phage enters the lytic path­way. Phage propagation in the lytic pathway is a neatly orchestrated yet not error-free process: in a very small number of cases, it is not the phage DNA that is packaged into pre-formed phage cap­sids (marked red in Fig. 3 ) but fragments of host chromosomal or plasmid DNA (marked green in Fig. 3 ). After lysis of the host cell, virions and such 'transducing particles' can either infect other non-lysogenic cells in the culture (back to square one... ) or any of the lysogenic cells due to the presence of the cog­na­te phage receptor (those are the cells where the phages started their 'jour­ney', after all! ). Al­though the phage DNA enters the lysogenic 'host' cell it cannot replicate due to the presence of the repressor of the resident prophage in the cell's cytoplasm ('superinfection im­munity' was ex­plained in more detail here ). Also, the 'transducing' DNA enters the lysogenic 'host' cell via the cog­nate phage receptor and can be stably maintained in the host if it carries a rep­li­ca­tion origin (in case of plasmid DNA ). Non-replicative 'transducing' DNA can only be stably main­tain­ed – here the story comes full circle – if it is integrated into the host chromosome by re­com­bi­na­tion (most ef­fi­ciently by RecA-dependent homologous recombination but that's not the only way ). Isn't this a good example for 'bacterial altruism': one lysogenic cell sacrifices itself to pro­duce phages, which, after the lytic infection of a neighboring non-lysogenic cell, lead to the ac­cu­mu­la­tion of small num­bers of 'transducing particles' that "bring home" an antibiotic resistance gene to the rescue of its lysogenic siblings ? 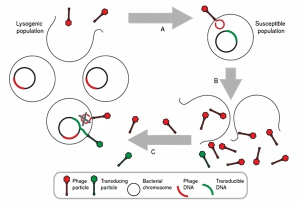 Figure 3. Auto-transduction model. A Spon­ta­ne­ous phage induction mediated by RecA*-sti­mu­la­ted cleavage of the CI phage repressor from a subpopulation of a lysogenic bacterial po­pu­la­tion allows the phage to infect a susceptible co­ex­ist­ing bacterial population. B Propagation on the susceptible population and subsequent ly­sis releases phage progeny along with low num­bers of transducing particles. C Owing to im­mu­ni­ty to its own phages, the lysogenic population can 'filter out' the infective phage progeny and allow the occasional transducing particle to de­li­ver its DNA to the lysogenic population by au­to-transduction. Source (modified)

The proposed mechanism of HGT by autotransduction is one pathway that allows S. aureus – and probably most other bacteria – to access the multitude of so-called 'ac­cessory' genes (also called 'variable genome' ) of its pan­genome. Interestingly, McCarthy et al. found in their stu­dy of co-colonization of piglet skin by two closely related S. aureus strains (see above ) efficient horizontal transfer of plasmids and phages but no indication for exchanges of parts of the 'core genomes' (analyzed by SNPs in the genome sequences ). Similarly, Haaber et al. observed a significantly higher autotransduction rate for their plas­mid and pathogenicity island markers, CamR and TetR, as compared to the rate for the chromosomal marker, EryR. On the other hand, geneticists working with E. coli have used generalized transduction for strain constructions, mostly φP1 transduction, for decades without having ever observed notable differences in "transducibilty" for genes of the 'core genome' and 'accessory genes' (except for the known decrease of marker co-transduction fre­quen­cies among strains that carry phenotypically in­con­spi­cuous genomic inversions or larger indels ). These ob­viously contradictory findings need to be addressed in future studies. Not all that biologists would like to know about HGT is known, far from that !

Here the Tour d'Horizon ends, well, almost. Having just read about the very efficient, almost ram­pant, HGT among closely related S. aureus strains, you may conclude that this correlates pretty well with the almost impenetrable thicket of HGT events in the astonishing trees for the 181 bac­te­ria analyzed by Dagan et al. (part 1, Figure 2 ). Not so! Here's a back-to-the-envelope calculation: assuming that the 181 genomes encode for 3,000 proteins, on average, and that 80% of the genes have a 'HGT backstory', you come up with 434,000 HGT events. Assuming, in addition, that these HGT events were spread evenly over the 3 billion years of bacterial evolution, you end up with one HGT event every 7,000 years for one of the 181 genomes. That's not actually "rampant". So, when comparing or correlating findings it's always a good idea to mind the scales. This said, I thank you for your company during this long descent from the peaks of theory…