Did the Neanderthals Eat Mushrooms?

A recent report in Nature carries the tantalizing title "Neanderthal behaviour, diet, and disease in­ferred from ancient DNA in dental calculus." A consortium of some 30 authors from about a dozen countries studied the dental plaque of five Neanderthals, two found in caves in Belgium, two in Spain, and one in Italy. (A good thing that these relatives of ours did not practice extensive dental hygiene, which would have removed the evidence.) By DNA analysis, they concluded that the re­la­tives of ours that resided in the Belgian cave were steppe-dwellers and meat eaters, living mainly on wholly rhinoceros and wild sheep. By contrast, the ones from the Spanish cave lived in forests, ate no meat and subsisted on mushrooms, pine nuts, and moss. It turns out that mushrooms re­mains were found in several of these specimens. Here are the results: 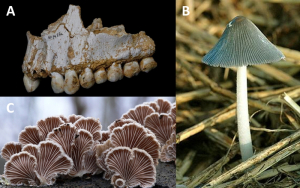 In the Belgian specimens, the researchers found DNA of Coprinopsis cinerea (here called 'gray shag'), in the Spa­nish one, Schizophyllum commune (split gill), each making up about 2.5 to 3.5 percent of the total DNA found in the specimens of plaque. To a present-day gastromycologist, these seem to be somewhat strange choices. Given that larger and more tasty specimens must have been avai­lable, why did they choose these relatively small and not especially toothsome ones? Also, C. cinerea, being inky caps, don't keep well.

I hate to be a spoilsport but I confess to have some doubts. S. commune and species of Coprinus have been found to be human pathogens and may conceivably have traveled to the teeth from inside the bo­dy. Of course, the alternative, that our early relatives were mycophagists has much greater appeal. If corroborated, it would mean that the human family has used mushrooms for over 100,000 years.

The paper includes some other challenging findings, such as signs of dental disease and perhaps attempt to cure it. It seems likely that further work will shed more light on these fascinating questions.

Listen to a discussion of the Neanderthal diet by Vincent, Elio, and Michael on This Week in Microbiology episode #148.