« On Shape | Main | Why Did Jacques Monod Not Become Ole Maaløe »

A recent paper by McNally et al. entitled: 'Killing by Type VI secretion drives genetic phase se­pa­ra­tion and correlates with increased cooperation' begins with the felicitous paragraph below. I think that it encapsulates the main features of the paradigm shift that has occurred recently, from bac­te­ria as lone (planktonic) individuals to organisms with a communal (often sessile) lifestyle.

"Microbes are fundamentally social organisms 1–5. They often live in dense, surf ace attached com­munities, and participate in a range of social behaviours mediated through the production and con­sumption of extra-cellular proteins and metabolites. Paradigmatic examples include the co­op­e­ra­tive production of digestive enzymes 6, metal chelators 7, signalling molecules 6 and the struc­tu­ral components of biofilms 8. Many of these extracellular compounds are susceptible to social ex­ploi­tation, in which non-producing 'cheats' gain an evolutionary advantage. If unchecked, this so­cial ex­ploitation can lead to the extinction of cooperative genotypes 9,10." 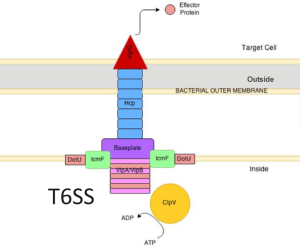 The paper goes on to consider the effect of Vibrio cho­le­rae killing adjacent bacteria, a social interaction if there ever was one. The authors use what to me are advanced mathematical computations leading to models that pre­dict the behavior in two-dimensional space of killers and adjacent sensitive cells. The general conclusion is that a kind of self-organization takes place. But there is more to it and cooperation between like cells is involved as well. They say: "We mathematically demonstrate that T6SS-me­di­a­ted killing should favour the evolution of public goods cooperation, and empirically support this prediction using a phylogenetic comparative analysis. This work il­lus­trates the twin role played by the T6SS, dealing death to local competitors while simultaneously creating con­di­tions potentially favouring the evolution of cooperation with kin."

Anyhow, the paper enlarges the role of Type VI secretion, that fascinating mechanism for de­li­ver­ing proteins, mainly toxic ones, to adjacent cells, both prokaryotic and eukaryotic. The cells that use this system prevent self-killing by producing toxin-specific immunity determinants. Fun is that the system uses what looks like a phage tail, a theme that recurs again and again. See here and here.