For the next four posts we'll cover the fungi in what we are calling  »Fungomania«. 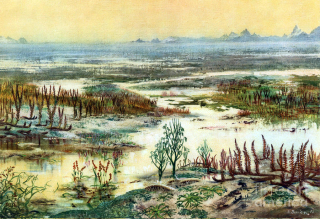 "The fossil record of life's earliest steps onto land is pro­foundly incomplete."  So starts a paper by Cambridge Uni­versity's Martin Smith that helps shed light on this mo­men­tous happening. The climb ashore took place about 500 million years ago, give or take (no one seems to be quite sure of the date). These successful ad­ven­tur­ers were plants, but still far from the highly-evolved plants we know today. They were small, simple in struc­ture, and non-flowering. Not yet vascular plants, they were spore formers, possibly akin to the liverworts. On land, they faced the vicissitudes of novel and harsh en­vironments. Their survival was probably helped by as­sociation with fungi, which could have pioneered on land to make the soil needed for plant growth. In time, sym­bioses like mycorrhizae were established. Anyhow, the earliest association of fungi and plants is revealed in fossils some 460 million-years-old. Keep in mind that fungi are much old­er than that. 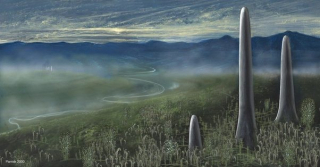 An aside. Although not directly relevant to today's plant-fungus story, fungi have some interesting bragging rights. For some time, fungi managed to reign supreme on land. From approximately 420 to 350 million years ago (the Si­lurian-Devonian eras), the landscape was dominated by imposing rocket-like structures some 8 meters tall and 1 meter in diameter. Known as Prototaxites, these giants are thought to have been fungal in nature or maybe li­chens, (although not everyone agrees).

But back to fungi and terrestrial plants. Smith reports that a fungus by the evocative name of Tortotubus pro­tu­berans is found in some manageable fossil rocks from the Silurian-Devonian. This makes them the oldest fossils of land creatures. This fungus' morphological features are striking: the fungal filaments show perforations in the septa, bilateral cell walls, and intertwined hyphae in the shape of cords. Smith concludes: "This morphology and pattern of growth together indicate an affinity with the ‘higher’ fungi (Dikarya) and document the formation of differentiated mycelium. The presence of complex my­ce­li­al fossils in the earliest Silurian corroborates the likely contribution of fungi to the colonization of land and the establishment of modern sedimentological systems; their rise seemingly accompan­ied the diversification of early embryophytes and the vegetation of the terrestrial biosphere".

Morphological comparisons are in order: "The pattern of growth in Tortotubus finds a vivid analogue among mush­room-forming members of Basidiomycota and Asco­my­co­ta that produce coherent threads of entwined hyphae–termed mycelial cords, mycelial strands or syrrotia".

But here's a question: what did these pioneer fungi use for food? Being saprophytes, and plant material not being available, they must have lived off other con­sum­able organisms. Photosynthetic bacteria come to mind and, if not them, then other organisms that lived off them.

The implications of these findings are tantalizing. Fungal mycelia may have played a key role in stabilizing the soil, which would have been important for plants, being that early on they lacked roots. In other words, fungi may have been responsible for the earliest stage of agriculture, that is, making the ground suitable for plants to grow. Now you know why we indulge in Fungomania in these pages.