This is the second part of our »Fungomania« series. Read part 1 here.

The Fungi have an intense obsession with spreading their spores far and wide. Accordingly, many mushrooms make spores by the millions, giant puffballs by the billions. Most of the spores have little chance to succeed, but there is safety in numbers (a strategy not unlike that of the vertebrate males seeking reproduction). But making spores in prodigious amounts would do little good unless they can be dispersed over a large area. Indeed, fungi have developed diverse strategies to accomplish this end. Some use wind, others water, yet the others depend on the helpful activities of insects and other animals. A classic book on the subject entitled Fungal Spores: Their Liberation and Dispersal was published in 1971 by the British mycologist C.T. Ingold. It reads like a novel, so fascinating are the varieties of the strategies employed by fungi to accomplish to disseminate their spores. We have dealt with this topic before (Arms and the Fungus; Raindrops Keep Falling On Their Heads; The Fastest Flights in Nature).

Spore dispersal by insects is a common strategy, which is not surprising in view of their talent as pollinators. Fungi do their best to attract such insects. Some fungi, for example, the rust fungi of cereals, add a tempting drop of nectar to their sacs of spores. This sugary liquid is smelly, thus it attracts flies, beetles, and ants, which gather the spores on their legs and thereby transport them far away. The theme of enticing insects to land on fungi recurs, and I come back to it below. But before I do, I would like to mention a curious fungus that uses an exceptional strategy for spore dispersal by insects. I doubt that I'll have another chance to mention it within these pages, so here it goes. 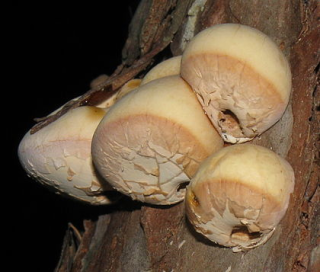 Cryptoporus volvatus is a small bracket fungus that is frequently found on the bark of dead conifers throughout North America. It is roundish, looking like a small puffball, typically 1 – 2 inches across. What is unique here is that while, as is customary among bracket fungi or polypores, this fungus makes its spores in pores on the underside of a cap, here the pore layer is enclosed in a cavity enclosed by a cover on its underside. This blocks the spread of the spores (hence the name, roughly meaning, 'veiled pore-hider'). In time, this cover is pierced by a hole through which insects, mostly beetles, enter the fungal cavity. The spores are then spread by the insects after they scurry out of the hole. This arrangement protects the spore-bearing tissue during its early development. Although unique among the bracket fungi, this is not uncommon among fleshy mushrooms. You can observe that in the white button mushrooms of your food store. Turn a young one over and you'll see that the spore-bearing 'gills' are covered by a soon evanescent membrane.

Some fungi take advantage of the fact that insects are attracted to flowers and deposit their spores on insect-inviting structures, such as the anthers of flowers. The pollinating visitor will then pick up the spores and carry then to distant sites. Some fungi even induce flowers to blossom earlier and remain open for a longer time (for an example, click here).

An even more assertive strategy used by a few fungi to attract pollinating insects is to fool them into believing that masses of spores are actually pollen. They do this by mimicry – they change the looks of the terminal leaves of a plant, typically of the mustard family, into what looks like floral petals. In reality, the 'petals' are covered with spores and, despite their looks, this is no flower at all. So thorough is this mimicry that not only insects are fooled, but botanists may also fall into this trap. They can be expected to feel confused because, in a fascinating twist, the new 'flowers' don't necessarily look like those of the parent plant. Pseudoflowers on a mustard plant may seem to be of buttercups! Such manipulations of a host by a parasite are not uncommon. In fact, in a study of 26 plant-pathogenic fungi, bacteria and viruses that relied on animal vectors for transmission, 10 were shown to enhance their chance of transmission by using this trick.

How To Make A Pseudoflower 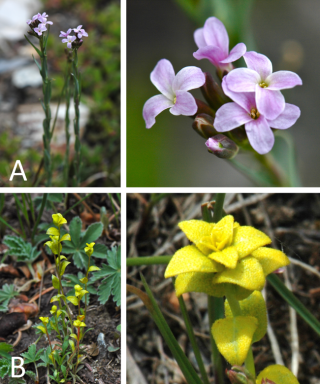 Making pseudoflowers is not cheap and calls for a major reprogramming of the host transcriptome. As shown in a detailed international study, the rust fungus Puccinia monoica does just that when infecting a member of the mustard family, Boechera stricta. Here, the pseudoflowers resemble buttercups. The authors found that 256 processes are significantly altered in the pseudoflowers. They state: "We report nine major host processes related to cell development (de-differentiation of mesophyll cells, rate of cell proliferation, coordinated organ growth and symmetry, of vascular pattering and inhibition of floral organs) and to host metabolism (auxin homeostasis, host cell wax surface compound synthesis, sugar metabolism and volatile organic compounds synthesis) that appear to be re-programmed at the transcriptional level in pseudoflowers. Alterations in the expression of regulators of cell fate and auxin homeostasis genes may account for the distinctive morphology of pseudoflowers, which are essentially modified leaves." Just how the fungi elicit such majestic responses is not known, but they clearly don't mind that the plant pays the price.

The Case of The Mummy Berry Disease 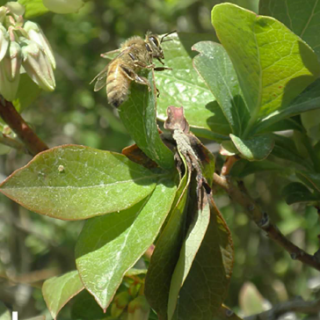 Figure 3. Blueberry leaves infected with Monilinia vaccinii-corymbosi being visited by a bee. Source

A disease of blueberries (mummy berry disease) is caused by a fungus, Monilinia vaccinii-corymbosi. Here, the fungus does not produce showy pseudoflowers. Rather, it coats blighted leaves with a sugary matrix that contains spores. These now raunchy looking leaves are still called pseudoflowers. The fungal growth attracts insects by manufacturing a 'fermented tea' smell and possibly by reflecting UV in a way that makes the leaves look like flowers. If you wonder about the disease itself, the fungi penetrate the tissue of the ovaries via a path similar to that of the pollen tubes, eventually causing the characteristic shriveling ('mummification') of the berries.

A recent study used PCR to measure the spores carried aloft by bees, flies and other potential insect vectors. The bees turned out to be the more effective vectors. The bees responded, among others, to two volatile compounds made both by infected leaves and the flowers, cinnamyl alcohol and cinnamaldehyde (which gives cinnamon its aroma and flavor). Conclusion: the fungus induces what the authors call 'floral scent mimicry'. This causes a problem for the plants because they depend on insects, especially bees, for their pollination. But that comes at the cost of having a pathogenic fungus visit it.

Parasitic manipulations range far and wide. They appeal not only to the parasite that brings them about but also to the biologists who hear of them. We have dealt with them often in this blog (see Bottoms up: Nefarious Nematodes and Red Rumps, Parasites, Predators, and Piggyback Rides, Dive! Dive! Dive!, Tales From Planet Fungus, A Symbiont Betrays Its Host). No doubt, we will keep this up...