This is the fourth part of our two weeks of »Fungomania«. See here, here, and here for first three parts.

This is a primer on the mycorrhizae, the association of plant roots and fungi. An outstanding re­view article on this subject has recently appeared, authored by four Frenchmen and one Ameri­can: F. Martin, A. Kohler, C. Murat, C. Veneault-Fourrey, and D. S. Hibbett. I found reading it both exciting and illuminating, and a good way to conclude this »Fungomania« series.

Mycorrhizae are surely the most widespread symbioses on earth. Without them, important food crops would be stunted in their growth, plus we would not have our forests of large trees. Pines, beeches, oaks, eucalyptus, and countless others would be missing from our experience. In other words, they are essential to us. 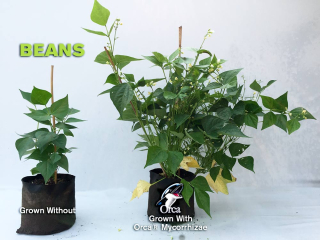 Figure 1. Bean plants grown with and without mycorrhizae (from a commercial supplier). Source

Mycorrhizae are divided into ecto- and endomycorrhizae, depending on whether the fungal filaments penetrate the root's cells or remain outside of them. But both kinds possess the ability to exchange material with the plant roots. Ectos are found in about 10% of plant families, al­though these include many trees, bushes, and orchids. To­day, some 20,000 fungal species participate in these symbioses. Both Ascomycetes and Basidiomycetes can be mycorrhizal, including mushrooms such as porcini and their ilk, truffles, and the amanitas of poisonous fame. Each of them can associate with many different hosts. It works the other way as well, and some trees have 15 or more different partners.

A bit of morphology first. Ectomycorrhizal fungi form an intricate hyphal network called the Hartig net within the rootlets (but not within their cells) and a sheathing mantle outside of them. Endo­my­corrizhae penetrate the rootlet cells and, typically, make an arbuscle, a structure that resem­bles a small tree, which is why they are called arbuscular. They are localized in what micro­bio­logists would call the periplasm, that is, they do not penetrate in the cell's protoplasm. Yet other forms of my­cor­rhizae involve heath plants (Ericaceae) and orchids. (Click to enlarge) Figure 2. The ectomycorrhizal symbiosis of aspen and L. bicolor. a Hyphae (white blobs) can be seen emanating from agar plugs. An ectomycorrhizal rootlet is highlighted with a red circle. b The ectomycorrhizal roots of a aspen–L. bicolor symbiosis. Note the ex­ten­sive clustering of rootlets resulting from chan­ges in auxin metabolism. c A transverse sec­tion through an aspen rootlet colonized by L. bicolor (green). A dense mantle of fungal mycelium en­sheaths the external surface of the rootlet, and intrusions of L. bicolor hyphae can be seen bet­ween the cell walls (red) of epidermal and cor­ti­cal cells; this fungal network is known as the Hartig net. d A 3D reconstruction of the ecto­my­cor­rhi­zal interaction showing the hyphal mantle formed by layers of aggregated hyphae that cover the root surface, and the labyrinthine Hartig net. Image in a courtesy of A. Jambois, INRA. Image in b courtesy of J. Felten, Swedish Univ.of Agricultural Sciences. Image in c cour­tesy of J. Plett, Western Sydney Univ., Australia. 3D reconstruction in d courtesy of H. Lagrange, INRA. Source

About 90% of all plants enjoy mycorrhizal relationships. Mycorrhizae serve as 'drinking straws,' carrying water, phosphorus and nitrogen-containing nutrients to the host plant. The figures are staggering: these fungi supply about 80% of the nitrogen and 90% of the phosphorus (phosphates, more precisely) required by its host. The plant, in turn, reciprocates by providing the fungi with sugary products of its photosynthesis. We are seeing a mutually beneficial kind of symbiosis. The amount of carbon so transferred is staggering – worldwide, around 100 billion tons annually. The hyphal filaments of my­cor­rhizal fungi can anas­to­mo­se with those of their own (but apparently not of other) species and exchange their nu­clei, thus maintaining genetic diversity. These anas­to­mo­ses can be with filaments associated with different plants as leeks, carrots, eggplants, and cotton. This way, my­cor­rhi­zae can form a nearly infinitely large network. Let your imagination wander, and the network could possibly be the size of a continent, as long as it has abutting trees or bushes. More moderately, mycorrhizae form what has been called Common Mycelial Networks, or the 'Wood Wide Web.' Soil microbiologist and friend David Lipson has estimated that the total mass of mycorrhizal fungi is around 10 billion tons, or a bit over a ton per human on Earth.

Mycorrhizae arose soon after plants emerged from oceans to colonize land, about 400 million years ago. It is likely that this was a key event in the establishment of these plants as early land colonizers. The earliest of fungal fossils known are in fact hyphae seen within plant tissue. Mycorrhizae have been eminently successful, as witnessed by having arisen independently some 60 times.

Interestingly, many mycorrhizal fungi have lost genes for the decay of plant organic matter. They obviously prefer to be fed rich sugars from the plants with which they associate than to get their own. Surprisingly perhaps, some of these fungi are carnivores and adopt a predatory strategy. Thus, members of the mushroom genus Laccaria trap and kill spring­tails and then transport the nitrogenous compounds so obtained to the host tree. 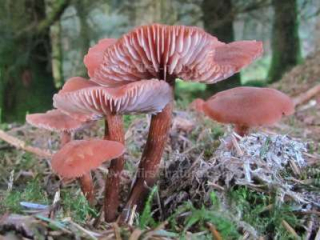 Studies have shown that establishing mycorrhizae re­quires the activity of a number of gene networks (see here) that are involved in a complex series of steps. To begin with, the plant roots must be able to tell that they are dealing with a potentially beneficial partner and not an enemy. Much is known, thanks to studies using tran­scriptomics (and other omics) and studies of protein-protein interactions. Involved in these transactions are, as expected, extracellular signaling molecules, mem­brane receptors, signaling proteins, transcription factors and their DNA binding motifs. To give you a flavor of what has been reported: typical signaling molecules are phenylpropanoids, salicylate, and jasmonic acid, all thought to be protective substances. The model system that has received a lot of attention is that of an aspen tree and the fungus Laccaria bicolor, a sym­biosis that can be conveniently reproduced in the lab. (L. bicolor, by the way, is an otherwise un­as­sum­ing mushroom, edible but not notably tasty.) For an idea of how such studies are conducted, see the diagram (Fig. 3). 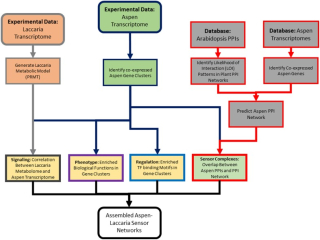 (Click to enlarge) Figure 4. Outline of analysis pipeline. This diagram outlines the multi-omics data used in analysis, what individual analysis methods were applied, and how those data types were integrated. Source

Mycorrhizal fungi and their host talk to each other via diffusible molecules, thus facilitating the development of ecosystems. On occasion, sugars are transported my­cor­rhiz­ally (a new adverb?) between different kinds of trees, such as among Douglas firs and birches. A young seed­ling in need of nourishment may obtain needed re­sour­ces from its mature neighbors. Likewise, a dying tree will share resources with adjacent ones. But beyond sup­ply­ing nutrients, fungi such as the Laccaria induce the pro­duc­tion of plant auxins that favor the development of lateral roots. Involved here are jasmonate, ethylene, and sesquiterpenes, suggesting that a rich gemisch of che­mi­cals is involved. But also, the fungi must talk the plant into accepting them as partners. Accordingly, these fungi secrete many small effector proteins, although their functions are largely unknown. One speculation is that they target growth hormone pathways to restructure the plant root. One of these proteins, called MiSSP7, is highly upregulated in the root tips and is re­quired to establish the symbiosis. This 'master regulator of symbiosis' is secreted by the fungus in response to some plant signals and acts in the plant nucleus to alter the expression of a gene in­volved in the jasmoate signaling pathway.

Now for more surprises. Mycorrhizae protect plants from toxic stress and pathogenic invaders, a subject that has been presented in these pages before (see Mycorrhizal Fungi). When plants are under attack, as, for instance, by insects or toxins, they produce warning chemicals that elicit de­fen­sive responses. These chemicals can be transferred to another plant to set off protective re­act­ions. For example, tomato plants infected with the pathogenic fungus Alternaria solani, induced neighboring uninfected plants to make more of six defensive enzymes, including peroxidase and polyphenol oxidases. Likewise, beans that are resistant to aphids communicate to sensitive plants that the predators are afoot using yet unidentified compounds. Obviously, such findings have considerable importance in agriculture. To quote from my previous post: 'Above all, knowing that the plants are sending varied and specific messages through these underground networks, we can never look at a silent forest, field, or meadow quite the same way again. Time we knew more about them.' 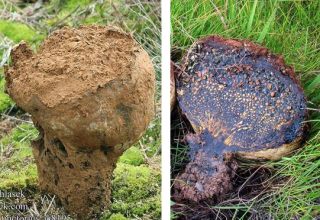 So important are mycorrhizae to trees that when de­for­ested areas are re-seeded, foresters often introduce mycorrhizal fungi artificially. This is crucial in attempts in reforesting lands that had been used for coal mining, waste dumps, clear-cutting, all mycorrhiza-harming ac­ti­vities. A common practice is to inoculate seedlings with several mycorrhizal fungi prior to planting. Among the more popular fungi used for this purpose is Pisolithus tinctorius (newer name, P. arhizus). It is worth describing. It is said to be the world's ugliest mushroom and is known by such disparaging names as 'dog turd fungus,' 'horse dung fungus,' or 'dead man's foot.' But it is also known as the 'dye maker's mushroom' because one can extract a nice brown dye from it. Its virtues have been extolled by Jennifer Frazer (see here). To reveals its charms, you need to cut the specimen ver­ti­cally. You will then see fungal differentiation unfold before your eyes. At the bottom, is a dark gelatinous tissue mass from which emerge tiny sacs called peridioles (hence the name pisolithus, for 'stone pea'). These contain spores and can be equated to miniature puffballs. As they mature upwards, the peridioles get bigger, eventually to burst and release the brown spores within. It's like watching a movie.

Mycorrhizae made it into The New Yorker magazine in August 7, 2016, possibly the only time that a fungal topic has graced its pages. It deals with a walk with a British mycologist, Merlin Sheldrake, in the woods near London. The author, Robert Macfarlane, writes: "Sheldrake and I sat facing the setting sun, and he explained how, for each formal scientific paper he published about my­cor­rhi­zae, he planned also to publish the paper's 'dark twin,' in which he would describe 'the messy net­work of crazy things that underlies every piece of cool, clean science, but that you aren't usually allowed to see — the fortunate accidents of field work, the tangential serendipitous observation that sets off a thought train, the boredom, the chance encounters.'" Lab people know what Shel­drake is talking about.

You should need no convincing that mycorrhizae are a subject of fundamental importance to our biosphere. I honestly believe that all literate people should be mindful of them and that this know­ledge will help safeguard them from threats due to the despoiling of our environment.