« Making Like a Flower | Main | Fine Reading: Unearthing the Roots of Ectomycorrhizal Symbioses »

If You Were a Carpenter Ant

This is the third part of our two weeks of »Fungomania«. See here and here for first two parts.

If you were a Carpenter ant (Camponotus leonardi­) in a rainforest in Thailand, your nest would be built high atop the canopy and, as a worker, you would seldom venture down to the ground du­ring your foraging trips. Somehow, perhaps for the presence of eerie-looking ant graveyards, you are hesitant to go along the path on the forest floor. But because of occasional breaks in the ca­no­py, traversing those paths becomes inevitable. That was the case a couple of weeks ago, when there was that strange dust descending onto you from the skies. You reacted to the dust that had stuck to your exoskeleton with your usual preening. But that did not prevent some of the particles from entering your respiratory system through holes called spiracles. You did not make much of those events then. But now you are just not feeling anything like your usual self. This morning you left the nest early and have been wondering aimlessly, incapable of following the pheromone tracks left by your nest-mates. You have a strong urge to climb on any vegetation you can find. Yet your efforts are repeatedly rendered useless by periodic convulsions that force you to fall off. And you start your climb again. Then, very close to noontime, with the sun at its highest point, you seek the central vein on the underside of a leaf, you open your mandible wide and bite onto that vein with all the force you can muster. Somehow, you can no longer open your mandible, you re­main in that grip. In a few hours, you are dead… 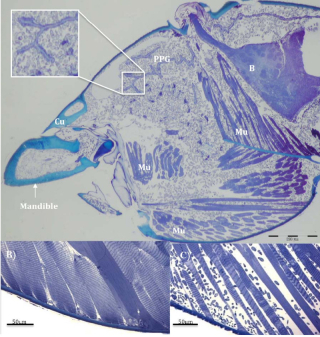 Figure 1. Heads of manipulated ants colonized by fungi. A (top panel) is a light micrograph (LM) saggital section through the head of an O. uni­la­te­ra­lis infected ant that was biting a leaf at the moment of fixation (that is, alive). The small grey blobs are fungal hyphal bodies that fill the head and mandibles. Note the spacing between the muscle fibers. The insect shows a close up of hyphal bodies around the post-pharyngeal gland (PPG). B is the brain, Mu, Muscles and Cu is cuticle. B is a LM of healthy muscle and C is a LM of muscle from a behaviorally manipulated ant that was biting a leaf and alive when re­moved for fixation. The small blobs between the fibers are fungal cells. Source

If you were this Carpenter ant, you would simply be an­oth­er Zombie Ant. The strange dust that fell upon you a couple of weeks ago was a cloud of spores from the ob­li­gate entomopathogenic fungus Ophiocordyceps uni­la­te­ra­lis. The fungal growth took over a large fraction of your head cavity without killing you until your behavior was mo­dified to precisely position your dying body to op­ti­mize spore dispersal. The death-grip, after which you died, was the result of widespread tissue damage in the brain and mandibular muscle (Fig. 1). Over a couple of weeks after that fatal bite a large fungal stalk will rise from the back of what used to be your head. This will be followed by a propulsive release of spores. Then, some of these spores will likely fall onto another worker ant to once again begin the bizarre life cycle of this fungus.

Here at STC, we've had previous posts (in 2008 and 2012) describing aspects of this remarkable behavior ma­ni­pu­la­tion of Carpenter ants by O. unilateralis. As a follow-up to Elio's description of plant mimikry by fungi in Part 2 of our »Fungomania«, I wanted to contribute a brief update on this evolving story of fungal manipulation of ant be­hav­iors as Part 3 of this year's »Fungomania«. The pro­gress of our understanding of the biology behind the Zombie Ants had previously all come from stunning, careful (and in my view extremely exciting) field studies that started with the initial recognition of the phenomenon around the time Darwin published "On The Origin of Species" (1859). Only in the last few years have such beautiful studies begun to be complemented by laboratory work, where the approaches of molecular biology can be applied to better understand the mechanisms underlying the behavior manipulation of an animal with a brain by a brainless fungus. Two papers in particular point at the new directions that researchers studying this phenomenon are taking. 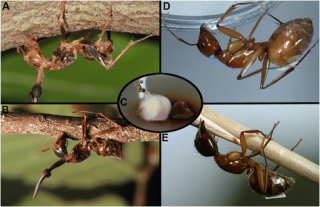 The work described on the first paper begins not in the tropical rainforests of Thailand or Brazil but in a tem­pe­rate forest of Donalds County, South Carolina (USA). There a team led by Charissa de Bekker, from David Hughes' lab at Penn State, searched for and found a new O. unilateralisfrom an infected ant still hanging from the underside of a twig (Fig. 2). (As it turns out, each strain of fungus manipulates its host's behavior to fit its dispersal need in each specific habitat. In South Carolina, rather than forcing the ant into a death-grip on the underside of a leaf, the ants bite the underside of twigs.) Using this newly discovered strain, they carried out laboratory in­fections of four different ant species, two known to be infected in the field Camponotus castaneus and Cam­po­no­tus americanus) and one that had never been ob­served to be infected even in areas where the fungus could be found (Camponotus penn­syl­va­ni­cus). Interestingly, the fungus killed all the lab-infected ants, regardless of species. But fungal stalks were only seen to emerge from the carcasses of the species seen infected in the field. This, of course, argues for the species-specificity of the phenomenon and points toward a co-evo­lu­tio­na­ry process. Importantly, when the investigators studied the behavior of the lab-infected ants, only C.castaneus and C.americanus were observed to die biting twigs. To close this first paper, the investigators assessed the metabolites produced by the fungus grown in the presence or absence of ant brains! As further indication of specific specificity, the metabolites produced varied de­pend­ing on the species that served as the source of the brains. Interestingly, two compounds reported to be involved in neurological disorders, guanobutyric acid and sphingosine, were enriched when the fungus was grown on the brains of its target species.

In the second paper the investigators moved their approach from metabolomics to tran­scrip­to­mics (along the way they also sequenced the genome of the new strain of O. unilateralis). I can only imagine the labor that must be involved in extracting RNA from ant's heads! Fungal cultures grown in insect cell culture media, and heads of healthy ants served as their controls. Infected ants were kept under a strict 12-hour dark 12-hour light regime and under these conditions showed remarkable synchrony in the manipulated biting behavior. The lights were turned on at 6 am, the ants bit the twigs but still moved at 9 am, and by 2 pm "bit the dust" (that is, they had died). So, the investigators decapitated the ants and carried out the RNAseq extractions and ana­lys­es from ants collected at 10 am (as the exhibited manipulated behavior) and at 2 pm (after ma­ni­pu­la­tion). Ana­ly­ses of differentially expressed genes in both fungus and ant give a first view of the de­tailed physiological responses of both organisms at those two times points.

Perhaps the most striking feature seen in the completed genome of O. unilateralis perhaps is that one third of the proteins predicted to be secreted are unique to this genome. And when the ana­lysis narrowed to small secreted proteins, the fraction of those unique to this fungus goes up to one half. This points at a repertoire of secreted proteins that may have evolved specifically during the evolution of its interaction with its target host species.

In terms of the differences in fungal gene expression between 10 am (manipulated behavior) and 2 pm (after manipulation), the most striking feature is that the fungus goes from expressing genes that might be involved in neurological control to genes that are clearly involved in eating the car­cass, for example, up-regulation of carbohydrate processing genes.

Figure 3 sum­ma­riz­es the main findings of this work: the key processes that the fungus and the ant seem to be modulating during manipulated biting behavior. There are many changes going on inside those fungus-filled heads! To me the two most intriguing findings are the possible secretion of many different (bacterial-type!) enterotoxins, ergot alkaloids, and polyketides. But you should inspect the figure to find your favorite mo­le­cule(s). On the part of the ant, this late in the infection, it may not be surprising that there is a down-regulation of its immune system. But everything else we see as af­fec­ted points nicely to a physiological entity that deservedly has been coined a Zombie ant.

With this work the investigators have opened wide a new window into the studies of parasite ma­nipulation of animal behavior. One might think that this is a bizarre evolutionary tale that has evolved only a few times. But nothing could be further from the truth. As Araujo and Hughes de­scribe in an excellent review on the subject, myriad fungi have "conquered the insect body." And not just insects, spiders too. And who knows… Did you hear the one about the Neanderthals that perhaps ate mushrooms?