Relieving the Pressure:
An Out of this World Discovery 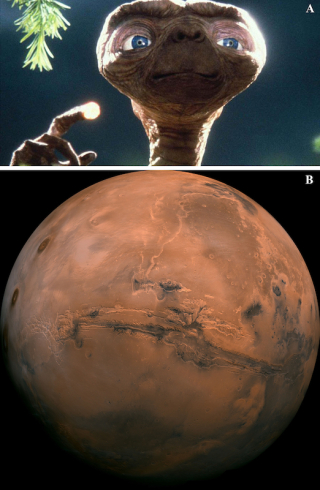 Figure 1. (a) E.T., a well-known example of the sort of humanoid alien many people imagine when they think of extra-terrestrial life, rather than the far more likely possibility of microbes. Source (Universal Pictures) (b) An image of our sister planet, Mars. This planet is one of many interstellar bodies to look to for the potential of harboring life. Source

Are we alone in the universe? That is a question humans have asked throughout history, and it is one for which we continue to search for an answer. While many may envision some sort of intelligent humanoid when thinking about an alien (Figure 1a), it is potential microbial life out there that is of foremost concern to astrobiology. On Earth, microbes evolved first and were around for billions of years before anything multicellular, let alone anything remotely humanoid evolved. Being able to find evidence of microbial life somewhere aside from Earth would be a scientific breakthrough of literally astronomical proportions. When thinking of where to look for extraterrestrial life, Mars (Figure 1b) has been a subject of interest for both science fiction speculation and astrobiological research, it being a planet that is close in proximity to Earth with many similarities to our home planet. People have long wondered about the possibilities of Martian life.

What Can Terrestrial Microbes Inform Us About Potential Martian Kindred?

Why is it believed that Mars might be home to some type of microbial life? From looking afar through telescopes to sending a rover named Curiosity (which even has its own Twitter account), we have been doing our best to learn more about "the red planet." Is there anything we could find during these investigations that might give an indication of what microbes may be there? How would one be able to tell? One way would be looking for signs of their metabolism. It just so happens that one of the discoveries made during these investigations is the presence of methane in the Martian atmosphere. Not only that, but there has been an increase in its abundance over time. While there are numerous abiotic factors that could result in the accumulation of methane in the atmosphere, one possible explanation is methanogens.

Methanogens, as you may be aware, are Archaea. They are so called because they produce methane as a byproduct of their metabolic reactions, as shown below. While they can use other organic compounds as a source of carbon as well, the two main reactions that can take place during methanogenesis are:

An image of the methanogenesis cycle is shown in Figure 2. Methanogens are anaerobic, nonphotosynthetic, and don't require organic nutrients, which makes them ideal candidates for potentially living in the Martian subsurface. 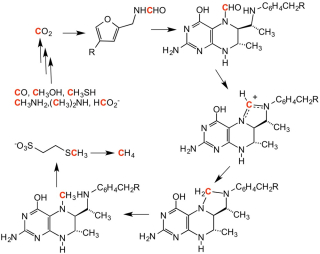 Three main assumptions increase the validity of the methanogen hypothesis. They are:

So, how realistic are these assumptions? The first one makes sense — if the microbes exist in the Mars subsurface, the surface would block harmful UV radiation. For the second assumption, while H2 gas has been detected in the Martian upper atmosphere, it has yet to be found at the surface or the subsurface. Despite this, astronomers still speculate that it may be present, and its presence is included in models of the Martian atmosphere. Should H2 gas be absent from the Martian atmosphere, there are other ways for methanogens to survive. Carbon monoxide gas has been detected and, since some methanogens are known to use CO rather than H2 for methanogenesis, the methanogen hypothesis can still hold water.

Speaking of 'holding water,' we come to the third assumption mentioned above — is there sufficient liquid water present for metabolism? When you look at Mars, you see a dry, red landscape. It doesn't exactly seem like a place that would be very wet. There is, however, evidence of frozen water in the Martian subsurface. In addition, there is a more recent discovery of structures known as recurring slope lineae (Figure 3). The dark, narrow streaks seen in the image are inferred to be due to the seasonal flow of water. Should this be the case, liquid water would flow between the Martian surface and subsurface in seasonal cycles. Although potential microbial life would have the water needed to survive, it would also face the challenges associated with the cycling conditions.

Can Methanogens Thrive at Low Pressure? 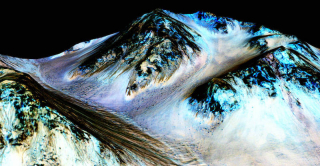 Figure 3. Recurring slope lineae have been recently detected on Mars, and are believed to point towards the presence of liquid water. The dark, narrow streaks seen in the image are inferred to be from the seasonal flow of water. Source

The atmospheric pressure on Mars is a major factor to consider in microbial survival on the planet. The surface pressure on Mars is about 1/100th that of Earth. This makes it a large limiting factor that could prevent microbial growth. Previous research has shown that below certain pressures, microbes fail to grow. The effects of low pressure are difficult to examine on Earth (where outside of a lab does one find locations that approach Martian pressure?). A few experiments have been run previously on methanogen survival under Mars-like conditions. The organisms have survived low pressure and carried out metabolism using simulated Martian soil (JSC Mars-1). Furthermore, microbes were shown to survive desiccation at both Mars and Earth surface pressures.

An important thing to stress is that these experiments only looked at microbial survival. A major outstanding question of those studies is whether methanogens display any measureable growth or metabolism under low-pressure, Martian-like conditions. A recent study by R.L. Mickol and T.A. Kral set out to measure just that.

For their experiments, the researchers used four species of methanogens: Methanothermobacter wolfeii, Methanosarcina barkeri, Methanobacterium formicicium, and Methanococcus maripaludis. These were chosen because they represent three of the seven methanogenic orders, as well as each being the type strain of their species. Alas, these microbes were grown in media with minerals and nutrients necessary for growth, not media that represent the available concentration of nutrients on Mars. The authors reasoned that the goal of their study was to see whether methanogens could survive the extremely low pressure on Mars, without worrying about other complicating factors. They grew each species under seven variable conditions of pressure, decreasing from 133 – 143 mbar to 6 – 10 mbar. 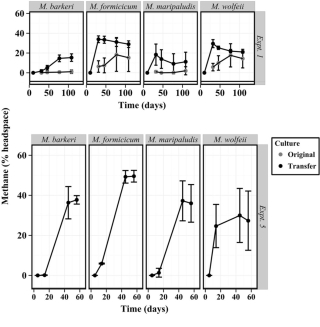 (Click to enlarge) Figure 4. Data showcasing the re­sults from experiments 1 and 5 from the pa­per by Mickol & Kral. Image modified from sour­ce to highlight two experiments at pressure ex­tremes, with experiment 1 having the greatest pressure of the seven (133 – 143 mbar) and ex­periment 5 having the lowest (6 – 10 mbar). Ex­pe­riments were run with cultures of the me­tha­no­gen (original), and then new cultures were in­oculated with the original culture (transfer) and the trial was rerun. Source

The results of the most extreme pressure conditions are seen in Figure 4. Methane production increased at each pressure condition tested, indicating that not only did the methanogens survive, but that their metabolism continued. During these experiments, the limiting factor on survival appeared to have been the evaporation of the liquid media. Given prior experiments showing that methanogens could survive desiccation, these results are promising. They help demonstrate that microbial organisms, like terrestrial ones, may also abide on another planet like Mars.

So What Does It All Mean?

While these new results are interesting, they comprise but one small step for microbiologists in studying as­tro­bio­lo­gy. There is still much that can be done to build upon this research. The authors mention in their con­clu­sion doing future experiments under conditions that pro­long the time of growth by keeping the media from dry­ing up. While this study accomplished its goal of show­ing that methanogens could survive and metabolize during low-pressure conditions, it does not show that they can survive on Mars, where various other limiting conditions are present. Future studies could consider including such factors as Mars-appropriate nutrient concentrations.

Unlike on our pale blue dot, Mars has harsher conditions influencing its potential hospitality to native life. One of the main factors that would limit potential life is the extremely low pressure on the planet. These new results by Mickol and Kral offer evidence that methanogens cannot only survive such a condition, but may also metabolize. If methanogenic microbes are indeed present on our sister planet, that could explain the presence of methane in the Martian atmosphere and, most significantly, be the first evidence of extraterrestrial life. Such a discovery would truly be one giant leap for 'microbiologist-kind.' 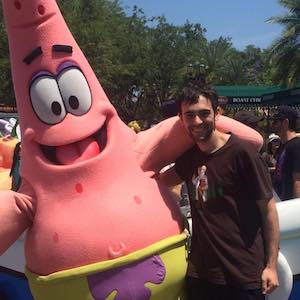 Mike is a new graduate of Canisius College, having majored in Biology. He not only had the opportunity to take the microbiology class taught by STC Associate Blogger Daniel Haeusser, but he also joined Dr. Haeusser's research lab. Mike is currently completing a Master's degree in Science Education and will be beginning a graduate program in Genetics, Genomics, and Bioinformatics in the fall.

Front page: (a) E.T., a well-known example of the sort of humanoid alien many people imagine when they think of extra-terrestrial life, rather than the far more likely possibility of microbes. Source. (b) An image of our sister planet, Mars. This planet is one of many interstellar bodies to look to for the potential of harboring life. Source.