The thought of bringing alien life forms to Earth or of creating dangerous mutant microorganisms during space travel might seem straight out of a science fiction movie. But are these concerns real­ly that far fetched? As our interest in astrobiology (the study of life in the universe) grows, the concern for an un­in­ten­tio­nal exchange of life between Earth and other celestial bodies becomes increasingly realistic. What happens if we introduce Earth’s microbes to other planets? What if we bring alien life back to Earth? Questions regarding such interplanetary contamination pose not on­ly practical issues but ethical ones as well.

Microbes cover every niche of our planet. The Dutch mi­cro­biologist Lourens Baas Becking once said, "everything is everywhere, but the environment selects." Microbes ex­ist as invisible passengers inhabiting all plants and ani­mals, including humans. Microbial life exists on Earth in habitats ranging from frigid waters to hydrothermal vents, from low to high pH, and even with or without oxygen. Clearly, microorganisms survive and even flourish in near­ly any condition imaginable. Because of this re­sil­i­ence, astrobiologists are concerned that microbial life could survive the stresses of space flight and possibly contaminate other planets upon arrival. We don’t want to travel to a new planet only to “discover” life that we mistakenly brought from Earth, nor do we want to disrupt life, or its evo­lution, on other planets.

As discussed at the American Association for the Advancement of Science (AAAS) meeting this Fe­bru­ary, NASA plans to send a spacecraft to Jupiter’s moon Europa in 2025 (Figure 1). The mission aims to search for undiscovered life on Europa. As water is necessary to sustain life, the large salt­water ocean beneath the icy surface of Europa makes it a hopeful candidate for extraterrestrial life (Figure 2). To minimize planetary contamination, the Europa lander will be built in a clean fa­ci­li­ty. Though a clean facility is “clean,” it is not sterile, and some species of bacteria have been found. Any microbes remaining on the lander will be baked out at temperatures greater than 125°C for hours to days. The lander will be encased in an aluminum biobarrier keeping con­ta­mi­nants at bay during its long journey to Europa. As Kevin Hand, an astrobiologist from NASA Jet Propulsion Laboratory, said during the AAAS meeting, “we want to keep Europa for Europans.” 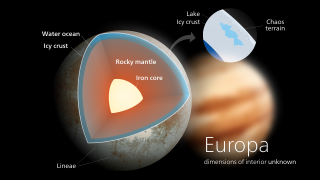 Introducing microbial life to other planets is not the only risk. Microbes could be brought back to Earth knowingly for study or inadvertently through contaminated equip­ment. Samples must be handled with care to minimize any unknown risk to native life on Earth. The Europa lander mission is not scheduled to bring samples back to Earth, but sample-return is possible for future missions. Such missions may bring back anything from liquids, soil and rocks, or small amount of minerals that will be studied using instruments that could not be brought into space. To prevent contamination of Earth, collected samples are studied using the most stringent biocontainment facilities (BSL-4).

You may be wondering whether interplanetary contamination actually matters. After all, me­teo­rites and micrometeorites have bombarded planets in our solar system for four billion years. Ma­ny scientists believe the transfer of microbes between planets has already happened. Others think that we are unnecessarily cautious and should spend precious research dollars elsewhere. How­ev­er, can we risk a War of the Worlds-style alien invasion of Earth? The dilemma remains: we don’t know if interplanetary contamination is a real risk, but it seems reasonable to take precautions in case these risks exist.

Coming from a planet where microbes rule every niche (including the human body), it is inevitable that astronauts bring microbes from Earth onto space missions. What is unclear though is how mi­crobial life adapts and evolves to new conditions. Things get even more complicated when you throw in how the human microbiome and immune sys­tem changes in space. With these cir­cum­stan­ces, it is likely that host-microbe interactions will change upon leaving Earth.

There is strong evidence that the immune sys­tem is compromised during space travel. Moreover, the human microbiome becomes less diverse after time in space: samples from astronauts on the Salyut and Mir orbiting platforms showed a significant reduction in human microbiota diversity even after just two weeks! Opportunistic pathogens, which rely on reduced immune function or altered host microbiota to cause disease, have the potential to wreak havoc in space. Changes in our microbiome and immune sys­tem go hand in hand; our microbiome, just like our immune sys­tem, protects against pathogens. 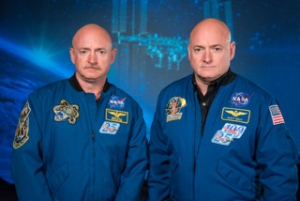 To gain insight into changes in the human body during space flight, NASA began a study of twins. Identical ve­te­ran astronauts twins, Scott and Mark Kelly, provide an ideal comparison for the effects of long-term space mis­sions on the human body (Figure 3). Starting in March 2015 Scott spent a year on the International Space Sta­tion (ISS) while his brother Mark served as an earthbound control subject. By obtaining baseline measurements of each, scientists could pinpoint biological differences after a year of zero gravity and freeze-dried food. Fred Turek, a scientist from Northwestern University characterized the microorganisms from the twins and found differences in viral, bacterial, and fungal microbiome between them. In Scott’s microbiome, the ratio of Firmicutes and Bacteroidetes, two dominant bacterial groups in the gut, was altered upon space travel. Upon return to Earth, the ratio of the two bacterial species returned to pre-flight levels.

To make matters worse for astronauts, bacteria become more virulent and more resistant to an­ti­biotics in space. These changes are due to both increased radiation levels and the microgravity environment in space: environmental stressors that select for resistance. Radiation breaks DNA strands or damages DNA bases, preventing it from being read or replicated correctly, leading to mutations. After 40 days on Mir, mutation rates in yeast were two to three times higher than in ground controls. In a study of Bacillus subtilis spores, mutations leading to rifampicin resistance were induced by 2-4 orders of magnitude greater than Earth controls. A high mutation rate allows bacteria to more quickly adapt to changing conditions.

Under microgravity conditions, growth rate, motility, and metabolite production are also altered. This is likely due to reduced extracellular mass-transport, with movement of molecules limited in low gravity. A team of scientists from the University of Colorado, the Hudson Alpha Institute, and the University of Alabama, determined how microgravity affects gene expression of bacteria by comparing the same E. coli strain grown on Earth and on the ISS. They found that cells grown on the ISS had increased expression of genes associated with starvation, metabolism, and use of al­ternative energy sources.

Many times, astronauts are unable to return to Earth until their space missions end. Because crewmembers may become sick or injured in space, it is essential that we understand the fate of microbial life in space. Between 1989 and 1998, there were 26 documented infections in space for US astronauts. Studies in the 1980s showed that antibiotics need to be 2-4 times more con­cen­tra­ted to kill E. coli and S. aureus in space than on the ground. Increased antibiotic resistance in bac­teria may mean that typical treatments are not effective, and increased virulence may mean that the symptoms of an infection are more severe. As we expand our reach into the solar system, we need to take precautions to make sure we do so safely for ourselves, the Earth, and other celestial bodies. 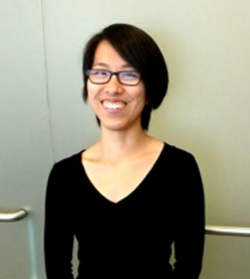 Jennifer Tsang is a postdoctoral research fellow studying antimicrobial resistance in the lab of James Kirby at Beth Israel Deaconess Medical Center. She blogs at The Microbial Menagerie.