Tales of Mystery and Imagination (2/2)

This is the second part of »Tales of Mystery and Imagination« – see here for the first part.

The Case of the Missing Peptidoglycan

Early attempts from the 1970's to detect peptidoglycan in PVC superphylum members failed, lead­ing to the accepted conclusion that the periplasm of the majority of its species lacked a cell wall. These early experiments involved classical techniques of peptidoglycan detection through bio­che­mi­cal purification and characterization of sacculi, and observation by electron microscopy. In more recent years, as genome sequencing began to be cheaply attainable, microbiologists scoured PVC superphylum species for genes involved in cell wall synthesis. Their target for comparison was un­derstandably the well-characterized dcw cluster of genes widely conserved in other Gram-negative (particularly non-coccoid) bacterial lineages. Those first searches suggested that PVC superphylum members had indeed lost key dcw cluster genes that were likely essential for cell wall synthesis.

Study of the Planctomycetes in particular provided further evidence that they and their super­phy­lum members may have evolved to lose cell wall structure. For example, Plancotmycete isolates tested resistant to antibiotics targeting cell wall synthesis. While none of this proved that PVC mem­bers by and large lacked cell walls, together the data seemed to point to that conclusion. That is, if not for the chlamydial anomaly. Unlike the Plancotomycetes, Chlamydiae are sensitive to beta-lac­tams, and the genomes of several species encode a complete (or nearly complete) suite of en­zym­es for peptidoglycan synthesis that have been recognized for over a decade. But, as explained above, researchers failed to actually find any peptidoglycan in the Chlamydiae, particularly the pathogenic ones that are the focus of most research. Hence the anomaly that remained until just the last couple of years. As often occurs in science, new technologies and techniques have pro­vid­ed novel discoveries that overturn long held assumptions.

More advanced genome analyses optimized for detecting remote relationships between proteins encoded in dist­ant lineages revealed in 2015 that Planctomycetes do in­deed contain all of the es­sential genes for peptidoglycan synthesis. This study and others were able to de­tect pep­ti­do­gly­can components through advanced chro­ma­to­gra­phy coupled to mass spectrometry, visualize cell wall through cryo-electron tomography (Figure 3), cell wall dissolution through lysozyme treatment, and in­cor­po­ra­tion of labeled probes into peptidoglycan monomers. A year prior to this, chemical probes had been used to de­tect peptidoglycan in one pathogenic species of Chla­my­diae. By 2016, use of super-resolution microscopy re­vealed that these so called anomalies were limiting their cell wall synt­hesis to a narrow band at the site of division, during their replicative phase alone. With these dis­co­ver­ies, along with identification of peptidoglycan in several species of Verrucomicrobia, the long held assumptions of wall-less PVC superphylum deviancy were shattered, leaving the Gram-positive Mollicutes as the last bastion of true peptidoglycan-lacking deviants (See Part 1, Fig. 1). Yet, the intriguing uni­que­ness and diversity of the PVC superphylum isn't quite extinguished. These results end up birthing even more questions (evolutionary and cell biological) into PVC super­phy­lum management of / re­liance on peptidoglycan, and how they coordinate its placement with cy­to­kinesis.

As the character of police detective Columbo became famous for noticing that some things still don't quite add up, so it is in the PVC superphylum story to date, despite the discovery of ubi­quit­ous cell wall throughout species branches and the resolution of the chlamydial anomaly. Perhaps most obviously: if the Planctomycetes actually do contain peptidoglycan, why aren't they sus­cep­tible to cell-wall-targeting antibiotics. (In reality some are, it is just that most don't seem to be.)

The authors of the Frontiers in Microbiology review postulate that Planctomycete resistance could be attributed in part to their encoding of multiple beta-lactamase enzymes. However, the cor­re­la­tion of resistance to the presence of known resistance genes does not line up too well. I wonder whether it is more a testament to the fact that many of the Planctomycetes may indeed produce cell wall, but do not absolutely require it. In particular I would envision this for those Planc­to­my­ce­tes that divide through budding. And the reasoning here brings us back to the other historically unique diversity of the PVC superphylum that still holds true, the myriad forms of cytokinesis, that often occur without FtsZ (Figure 1).

Though sporting interesting surface structures through extensions of their outer envelope, the Verrucomicrobia mirror the Gram-negative common ancestor to the PVC superphylum in terms of cell wall synthesis and cytokinesis. That is, they contain peptidoglycan, presumably elongate through machinery that includes MreB, and they divide through machinery founded upon FtsZ. But they are just one evolutionary branch of the superphylum. The other branches employ non-stan­dard methods of cytokinesis.

The budding Planctomycetes contain peptidoglycan, but they have evolved to divide without FtsZ through a budding process. FtsZ-less cell division through a budding or blebbing-like process is a hallmark of L-form bacteria, which survive absent a cell wall. Perhaps the budding Planctomycetes can similarly easily adapt to existence without a cell wall in the face of antibiotics. In contrast then, the fission Planctomycetes would be closer to the system of the non-pathogenic Chlamydiae, which likewise contain peptidoglycan throughout their periplasm, yet divide (roughly) down the middle in a manner that would require peptidoglycan synthesis. How can these PVC superphylum members do this, sans FtsZ? Likely, as has been shown for some, the actin homolog MreB has taken on the role of also guiding peptidoglycan synthesis during cell division, not just along the cross-wall during rod morphogenesis.

MreB takes on just such a role during the slightly asymmetric division of pathogenic Chlamydiae, but these obligate intracellular species appear to have also evolved to limit their use of cell wall to just the time when still absolutely essential – cytokinesis, thereby making them less prone to host destruction or antibiotics in the scheme of their entire life cycle. (This is a fascinating story in of it­self that might be interesting to go into in a later column.)

How did each of these alternative routes evolve, and what combination of bacterial and host se­lec­tive pressures may have been involved? While the role of MreB for linking cell wall and division is known in some cases, for most it is, at this point, just conjecture. Perhaps most ripe for Tal­mu­dic speculation (as we are prone to here): How does the diversity of division mechanisms/players and peptidoglycan deployment relate to the well-defined endomembrane system that PVC su­per­phy­lum members have often become noted for? Does the evolution of expansive endomembrane systems create a need for less reliance on strict morphology / division links, favoring a budding- like system? Did such a system lead to the replacement of FtsZ (the tubulin ancestor) with MreB (the actin ancestor) that ultimately gave rise to the actin-myosin division machinery of animals?

Somehow, even though the PVC superphylum members now look a little bit more 'normal' to our expectations for Domain Bacteria, they still hold on to significant exotic intrigue. 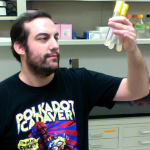 Daniel is an Assistant Professor in the Biology De­part­ment of Canisius Col­lege in Buffalo, New York. He teaches courses in the freshman and so­pho­mo­re introductory sequence, General Microbiology, and an integrated En­vironmental & Pathogenic Microbiology course. In his lab he focuses on un­dergraduate research mentoring through projects on bacterial cell division and phage factors that subvert the bacterial cytoskeleton. In addition to science, he enjoys reading, writing, and film. He can be found on Twitter and his book reviews at Reading 1000 Lives or on Goodreads.