A Whiff of Taxonomy – Pseudoalteromonas 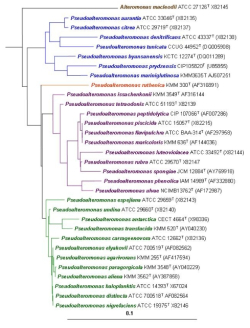 (click to enlarge) Figure 1. A phylogenic tree of the pseudoalteromonads. Source

One runs into new names of bacteria all the time and making sense of this taxonomic cavalcade is demanding. Which taxa are worth remembering? Clearly, that is dictated by your current interests, but that is dangerously insular, a hit-and-miss proposition if there ever was one. What to do? Here is an utterly flawed but potentially fun criterion for inclusion in your list: an often-quirky name conjured up by taxonomists that gets your attention. The genus name Pseudoalteromonas is one of these, so I decided to find out more about it. Actually, the name turned out to be a lame motivation, as this genus is important in marine ecology and has a talent for making interesting bioactive compounds.

This is a fairly recently erected genus of rod-shaped, polar-flagellated, motile, heterotrophic marine Gram-negative gammaproteobacteria that are noteworthy for making antibiotics and other bioactive compounds, such as anti-fouling agents and algicides. This is no small genus — it includes over 3 dozen species as of now (its 'parent' genus Alteromonas has many fewer. So much for filial respect). The genus can be neatly divided up into a pigmented and a non-pigmented group. The pigmented ones are responsible for making most of the long list of interesting compounds made by these organisms. These chemicals include violacein, a versatile compound that is not only pretty but that, among other things, is antibacterial, tumoricidal, antiviral, and involved in the morphogenesis of some marine invertebrates (it is also made by a number of other genera). The long list of compounds made by the pseudoalteromonads further includes toxic proteins, polyanionic exopolymers, various types of alkaloids, and brominated aromatics. 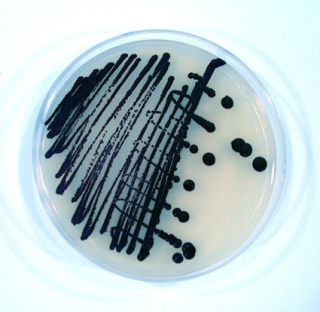 Non trivial, this genus. At the time of writing, PubMed has 924 references to it. We have not slighted it in this blog. I was surprised to see how many entries we have posted that mention this genus: for an Antarctic halophilic member, see here; for their biofilming ability, here; for algicidal properties, here; and for its remarkable ability to induce metamorphosis in tube worms, here.

So why the ‘pseudo?’ As you already guessed, these organisms belonged originally to the genus Alteromonas, so why the change? As you guessed, it has to do with a phylogenetic analysis of 16S rRNA, which demands this partition.

I have been a microbiologist for a long time, but I confess that most of it was spent in blissful ignorance of the members of this exciting genus, whatever names they used to have. Oh well, much of it is fairly new.

Front page image: SEM picture of P. Atlantica by Chandra Carpenter at the University of Georgia.