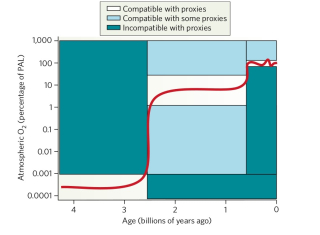 Oxygen comprises one fifth of our atmosphere, and we take for granted that this a good thing. After all, aerobic creatures like ourselves could not exist without free O2. Not all life shares this feeling. Oxygen and its derivatives (known as "reactive oxygen species" or ROS) can wreak havoc on the biochemistry of many microbes. For some obligate anaerobes such as methane-producing archaea, even a small trace of oxygen poisons them irreversibly (see, for example Kiener and Leisinger 1983). Others fall somewhere in the middle. Microaerophiles (e.g. Helicobacter pylori, the cause of gastric ulcers) require small amounts of oxygen but are unable to tolerate full atmospheric concentrations (Bury-Moné et al., 2006).

Why are these organisms sensitive to oxygen? This is likely due to their evolutionary origin in an ancient, low-oxygen Earth (Kump 2008). In an environment much more reducing than today, these organisms used oxygen-labile proteins containing exposed iron-sulfur clusters (ferredoxins) to transfer electrons during cellular redox reactions. While well-adapted for conducting low redox potential electron transfers, the iron-sulfur clusters of ferredoxins are exposed to the bulk solvent (i.e. water in the cell), and are therefore very sensitive to oxygen and will "rust" or oxidize easily upon contact with free oxygen (see Falkowski 2015 for an excellent overview and Imlay 2006 for some mechanistic insights). Oxidation causes these enzymes to lose their function; unless they are rapidly repaired, an organism dependent on ferredoxins cannot continue to grow and may perish. 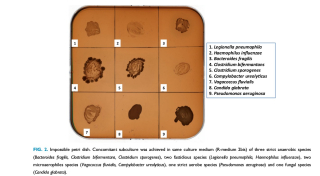 (click to enlarge) Figure 2. The "impossible petri dish" presented by Dione et al (2016) as evidence of the effectiveness of their quasi-universal medium.

Thanks to the sleuthing work of geochemists, it is now known that Earth's atmosphere became irreversibly oxygenated ~2.3 billion years ago (an excellent discussion of this topic is found in Canfield 2014). This so-called "great oxidation event" posed a serious challenge to ancient, oxygen-sensitive microbes. They had two choices: either develop new, oxygen-tolerant enzymes or flee to anoxic environments. Those that adapted spawned aerobes, and those that fled became the anaerobes and microaerophiles we know today. Where did they retreat to? Low-oxygen environments on today's Earth include deep-sea hydrothermal vents, organic-rich sediments and anoxic basins like the Black Sea. Other environments such as animal guts also contain many anaerobes/microaerobes, some of which are serious pathogens.

The Art of Cultivating Oxygen-Sensitive Microbes:

Because of their oxygen-sensitive physiology, laboratory isolation and cultivation for these microbes requires specialized protocols which are expensive, labor-intensive and require some training to master. Because of this, oxygen-sensitive organisms are the objects of less study than their oxygen-tolerant counterparts, and may be one reason why we can only cultivate a small fraction of the organisms detected from environmental sequences (more information on bacterial growth media recipes and isolation techniques can be found in a recent blog entry by Ananya Sen).

In a previous post on this blog, Professor Gemma Reguera discussed how Tanaka et al (2014) discovered a simple way to reduce cultivation biases related to oxygen sensitivity. These authors showed that by separating phosphate and agar during autoclaving, the production of hydrogen peroxide in agar was greatly reduced. Since hydrogen peroxide is a well-known bactericide, it stood to reason that many microbes would be inhibited by this compound. Their results indeed show that the recovery of novel microorganisms can be greatly improved with this simple modification of a time-tested technique.

As pointed out in the comments section on this blog, autoclaving phosphate separately from agar was long known as a "trick of the trade" in corners of the microbiology community. Those labs in the know passed this knowledge along to their students, who used these skills to cultivate fastidious microorganisms without it exactly becoming common knowledge. So, while the trick was not unknown, Tanaka et al's study is distinguished by the systematic way that they tested its effect on microbial isolation. Their results will no doubt help convince scientists to adopt this as a standard practice and help to resolve the "great plate count anomaly". However, this technique's applicability is restricted to the cultivation of aerobes, albeit those particularly sensitive to ROS such as hydrogen peroxide.

Turning back now to the cultivation of anaerobes and microaerophiles, we also find that many different tricks of the trade have been developed over the years. From candle jars to Hungate tubes to patented gas-generating systems, these inventions have made it much easier to routinely cultivate microaerophiles and anaerobes (see Plugge 2005 and Strobel 2009 for good summaries). However, the implementation of such techniques still varies from lab to lab, meaning there is no one universally-accepted way of cultivating these microorganisms.

An exciting attempt to address the aerobe/anaerobe gap was presented by Dione et al (2016) in their paper entitled "A quasi-universal medium to break the aerobic/anaerobic bacterial culture dichotomy in clinical microbiology". Their study reports optimization of a medium recipe that allows growth of both obligate anaerobes, microaerophiles and aerobes under an oxic atmosphere. Their recipe is based on the successful combination of several "tricks of the trade" that were systematically tested for their effect on 623 bacterial strains that run the gamut from obligate anaerobes to obligate aerobes.

These authors reduced the production of ROS either during sterilization or incubation of the cultures by:

In addition, they added two compounds (haemin and alphaketoglutarate) to stimulate the growth of some fastidious anaerobes. Out of 623 strains tested, they could culture all but two (both Mycobacteria) in air! The authors provide a great visual in the paper showing many such previously incompatible organisms growing together on an "impossible" petri dish.

Similar to Tanaka et al's study, none of the techniques in Dione et al's study are novel. For example, the addition of antioxidant compounds such as thioglycollate has long been known to facilitate the growth of anaerobes. Rather, it is the way in which Dione et al combined and systematically tested the different parameters that distinguishes their work. Overall, their study represents another important addition to the cultivation toolbox of microbiologists. Since it is relatively simple and not dependent on expensive equipment, their protocol could also make anaerobic microbiology more accessible to labs unable to afford specialized equipment.

The authors were, however, careful to state in their title that the medium is not truly universal. What could be missing? First, their technique has no way to provide gaseous substrates. For example, hydrogenotrophic methanogens (that might live on Saturn's moon, Enceladus!) require exogenous sources of hydrogen and carbon dioxide. A recent study from the same group has found an interesting way of addressing this problem through co-culture with a hydrogen-producing organism (Khelafia et al., 2016).

Other issues may be less straightforward to address. What about organisms that do not grow with normal cultivation methods? For example, the oligotrophic SAR11 clade consists of very abundant and slow-growing organisms that were only isolated by diluting natural seawater samples not amended with organic carbon (Connon and Giovannoni 2002). Since the antioxidants presented in Dione et al's study are also potential carbon sources, this medium would likely select against organisms that are both oligotrophic like SAR11 and oxygen-sensitive. Nonetheless, alternative inorganic reducing agents could potentially be used to allow such organisms to grow.

Other interesting questions come to mind. All the strains tested in this paper were presumably obtained using traditional isolation procedures. What would happen if this medium recipe was used for primary isolation? Would it help to bring organisms only known from 16S sequences into laboratory culture? What about the mechanism of action of this "quasi-universal" medium? How exactly do the antioxidants permit the growth of obligate anaerobes? These and other questions await further studies and are bound to inspire a renewed interest in microbial cultivation in the years to come! Jesse McNichol is a graduate of the MIT-WHOI Joint Program in Biological Oceanography where he studied the microbial ecology of deep-sea hydrothermal vents with Stefan Sievert. Jesse is currently a postdoctoral research assistant at the Chinese University of Hong Kong in the lab of Haiwei Luo.