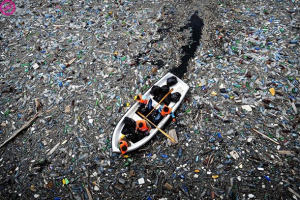 Most people are familiar with the concept of a carbon footprint. Some may also know there is such a thing as a water footprint. But who has ever heard of a plastic footprint? Well, soon, more and more people will have. Plastic pollution is a major global phenomenon that has crept up on us over the decades. About 300 million tons of plastic are produced globally each year and only about 10 percent of that is recycled. Most plastics degrade extremely slowly, thus constituting a major environmental hazard, especially in the oceans where microplastics are a matter of major concern (Figure 1). One potential solution for this problem is the synthesis of degradable plastics from renewable resources. This approach provides hope for the future but does not help to get rid of the plastics already in the environment.

Another approach is discovering and utilizing nature’s microbial metabolic power. Evolution has produced plastic-eating bacteria that can fight back against the vast piles of plastic dumped into soils, rivers, and oceans. Polyethylene (PE) is used extensively worldwide in plastic products, and its accumulation in the environment has evidently become a global concern. In a paper published by Krüger et al., nine novel PE degrading bacteria were isolated from Cerrado (a tropical savanna) soil in Brazil. These bacteria belong to multiple genera (see below) capable of degrading very high molecular weight PE (191.000 g/mol.) without additives or pre-treatments! 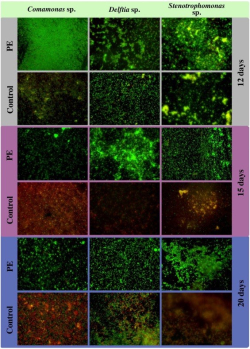 This is significant, as polyethylene (PE) has typically been considered to be largely non-biodegradable for decades. Although biodegradation of PE by bacterial cultures has been occasionally suspected, valid evidence of it has remained limited. As readers may be aware, bacteria (as all life forms) require a source of carbon for growth, and they may obtain it from a variety of organic material, broken down enzymatically. Hence bacteria are potentially capable of degrading rubbers and plastics, causing their deterioration and eventual disintegration.

Polyethylene degradation is not a trivial process. This polymer is extremely resistant to microbial attack due to its large, complex molecular structure and chemical composition. PE consists of very long chain alkanes with high molecular weight, greatly exceeding the reported limit of 500 g/mol for their microbial assimilation. In addition, their hydrophobic nature triggers chain folding. This results in crystalline structures that are stable and closely packed, making them hard to access by degrading enzymes. To begin, the authors collected plastic debris from Cerrado that had strong evidence of degradation, such as holes, cracks, and changes in color or texture. After cultivating the plastic-colonizing bacteria on different agar media, they successfully isolated and cultured 647 bacteria strains. These microbes were first screened for their ability to degrade mineral oil, this being a low-molecular-weight substrate chemically similar to PE. With the oil as the sole carbon source, they incubated the cultures for 7 days, and selected colonies based on the formation of a clear-zone on the agar. From the 647 bacteria strains, they identified 54 mineral-oil-degrading bacteria.

The group then evaluated the metabolic activity of these bacteria after incubation with films of PE as the sole carbon and energy sources. Negative controls, using a glass sheet instead of the PE film, were incubated under the same culture conditions for each isolate. After incubation, PE films and glass sheets were analyzed by microscopy to assess the bacterial viability. After evaluating the adherent microbes, they washed and disinfected the PE films to detach the microbial cells and debris so they could analyze the films for degradation. The chemical fingerprint of the disinfected PE films was assessed by Fourier transform infrared (FTIR) spectroscopy. Spectra of PE that was incubated with bacteria for 90 days was compared to positive controls exposed to natural weather conditions, and untreated PE (negative controls).

From 16S rRNA sequencing, they found 28 metabolically active bacterial strains. Of these, 16 strains were selected for further analysis based on total RNA concentrations. The 16 isolates that showed signs of degrading PE were grouped into the three genera: Comamonas, Delftia, and Stenotrophomonas.

The researchers then investigated the cellular adhesion and viability of the bacteria cultured with the PE films. Since non-soluble PE was the sole carbon and energy source provided, cells must adhere to the polymer surface, secrete degrading enzymes, and trigger the molecular modifications required for assimilation of hydrocarbons. These changes include bond scission, chemical transformation, and structural changes. Adherence also ensured that starved cells were close enough to assimilate the degradation products efficiently enough to meet their carbon and energy demands. 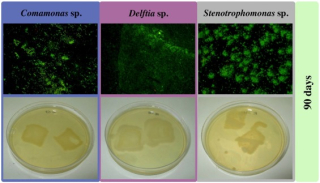 The viability of PE degrading bacteria required the plastic film (Figure 2). The authors demonstrated this by looking at strain adhesion to either a PE film or glass plate (control) and determining their viability over 20 days. During the first 12 days of incubation, there was only a small impact of PE on the cellular viability of these strains, with few dead cells in the absence of carbon sources. However, after 15 days there was a strong increase in cellular viability in the presence of PE as the sole carbon source, contrasting to the dead cells predominating in the carbon-free cultures. After 20 days of incubation, almost no dead cells could be found in the PE-containing cultures. These PE-degrading isolates maintained long-term viability even after 90 days (Figure 3).

The first step of PE degradation is typically auto-oxidation through the initial formation of radicals. These trigger a domino effect, leading to structural cross-linking within the polymer or oxidation of its carbon chain. This oxidation produces other reactive molecules that can either lead to the formation of more radicals that restart the process, or stabilize in the form of a hydroxyl, carbonyl, or nitro group, which often results in double bond formation (forming a vinylene group). Contrasting spectroscopic fingerprints of treated and untreated PE allowed the researchers to detect chemical modifications induced by the bacteria (or the weather as a positive control). 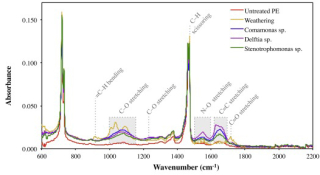 Highlighted absorption peaks (Figure 4) represent the major chemical modifications caused by the bacteria: chain scission (915-905 cm-1), and formation of alkoxy groups (1026 cm-1, 1090 cm-1), acyl groups (1220 cm-1), nitro groups (1500-1600 cm-1), double bonds (1640 cm-1), and carbonyl groups (1715 cm-1). This revealed a clear difference between biotic and abiotic degradations. Additionally, their results suggest two possible photodegradation mechanisms for the bacteria to use: Norrish type I and Norrish type II reactions. This organic chemistry takes place with ketones and aldehydes, and it involves the excitation of a carbonyl compound. The two types of reaction differ in the transitional mechanisms that ultimately lead to cleavage of the compound.

The nine novel bacterial strains of Comamonas, Delftia, and Stenotrophomonas were capable of degrading untreated PE of 191.000 g/mol., which makes them especially useful in the natural world. Future studies are needed to determine the specific molecular mechanisms underlying PE degradation by these bacteria. Nonetheless, isolation of these microorganisms that can degrade PE, a dominant component in plastics, presents us with a new approach to combat the ever-increasing global concern of plastic waste. These PE-digesting microbes offer a way to truly recycle plastic. Perhaps we have a microbial answer for our plastic pollution! 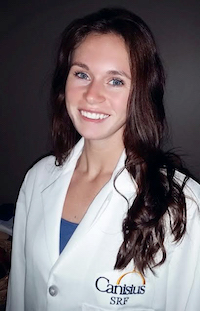 Sabrina is a new graduate of Canisius College, having majored in Chemistry. She is currently applying to medical school, with the hopes to commence next fall. At Canisius, she had the privilege of taking the microbiology class taught by STC Associate Blogger Dr. Daniel Haeusser, and was a student researcher in a Materials Chemistry lab under Dr. Jeremy Steinbacher. In addition to science, she enjoys sports, music, and travel.