« Making Genes from Scratch? Prokaryotes do too, after all | Main | Breaking the Oxygen Barrier in Microbial Cultivation »

Snippet ‒ The Fluke of the Eye 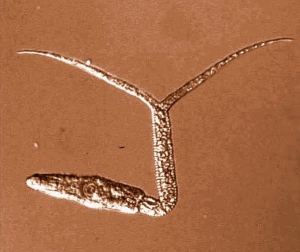 The wide-ranging stories of how parasites alter their host's behavior rank among the most fascinating in all of biology. I, for one, am enthralled by the convolutions of these interactions, all involving a high level of communication between disparate organism. Some of these exchanges have been celebrated aplenty, as in the case of Toxoplasma infected rodents losing their fear of cats (we had it in these pages, if tangentially). Other mind-boggling examples of 'parasitic manipulation' abound (see here, here, and here for samples from these pages). I here welcome yet another story of elaborate intrigue, one that invokes a parasite modifying the behavior of a fish.

I am talking of a Trematode called the eye-fluke, Diplostomum pseudospathaceum, that carries out its life cycle in three different animals (two hosts is common in this group of parasites, three, not unheard of). These flukes induce cataracts in the fish's eyes and, additionally, they change aspects of the fish's normal behavior designed to avoid being caught by predatory birds. A new study follows up on a fair amount of previous work done on this provocative bit of biology. These parasites carry out most of their life cycle in the digestive system of a bird, where they grow, mate, and make eggs that are released when the host defecates. When the eggs fall in water, they hatch into larvae that infect aquatic snails. Here the juvenile flukes develop further and are released as 'cercariae', the parasite's free living larval stage. Cercariae now infect fish such as the rainbow trout, eventually to migrate to the lens of their eyes. 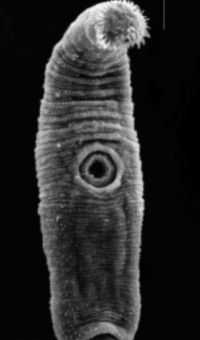 To complete the parasite's life cycle, the fish must be eaten by a bird, the fluke's ultimate host. Now think like the fluke for a moment. It is to your advantage to make the fish as easy a prey for a bird as possible (ponder about your growth, development, and sex that lie ahead). To make it easier for the birds, infected fish are made to swim more actively and to seek the surface of the water, which makes them more conspicuous. However, this sabotage of the fish's normal defensive behavior takes place only when the parasites have reached a certain stage in maturation. Before reaching that stage, the flukes are non-infective to the bird. So, if the fish were to be eaten now, that would be a dead-end for the parasites. Accordingly, before the flukes fully mature, the fish act normally and do not exhibit the suicidal behavior seen later. Instead, they remain still for long periods of time and are thus less likely to be seen by the birds. In one interesting test, the investigators produced a shadow to imitate a bird attacking. The fish froze (like deer in a headlight?), thus making them harder to see and thus to catch. The infected fish, however, resumed swimming sooner than uninfected ones. Conclusion? These flukes are nothing if not clever. 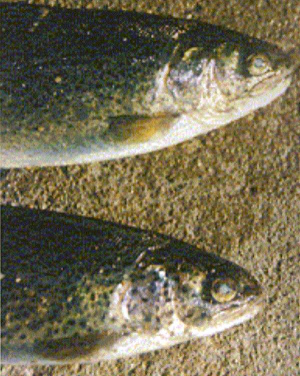 How long will it be before the signals involved in these interactions become known? I would guess that as the flukes mature in the fish's eye, they make new signaling molecules that go the brain, where they affect the degree of activity in the musculature involved in swimming. Easy enough to say, right?