A Star-Studded Phantastic Voyage of Phages

In which  the writer attempts to convey the abundant charm of Thinking Like a Phage – The Genius of the Viruses That In­fect Bacteria and Archaea, by Merry Youle.

Phages receive their due respect 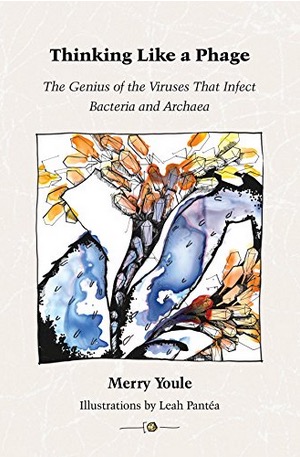 Bacteriophages ("phages", for short) are viruses that in­fect prokaryotes (bacteria and archaea), harnessing the resources of the host cell to replicate vast numbers of themselves, eventually causing the cell to lyse and re­lea­se the phage progeny, which then find new hosts and repeat the cycle. But that's just the textbook definition. What really hooks us is that some phages look just like lunar landers sent from alien spaceships. Merry Youle – one of STC's very own – has been in love with phages since she first encountered them in graduate school. Now she has written a charming paean to her beloved subjects, a full-length book all about "what makes the phages so fascinating, so intriguing, and so important."

Youle tells us, "This book was born of love, exasperation, and wonderment." (Warning: all of these sentiments are likely to infect the reader who finishes this book.) "Exas­pe­ra­tion ?" you ask. Youle holds that phages are de­serv­ing of far more ink, and respect, than they've thus far re­ceived. They exist everywhere where their hosts thrive, including hydrothermal vents, acidic springs, the arctic tundra, and your own gut. They impact geothermal cycles, algal blooms, and biodiversity. They are useful tools for genetic manipulation in the lab as well as in nature, and can serve as allies in treat­ing bacterial infections. If that's not an impressive enough résumé, at an estimated 1031 individual phages, they outnumber all other life forms on Earth. 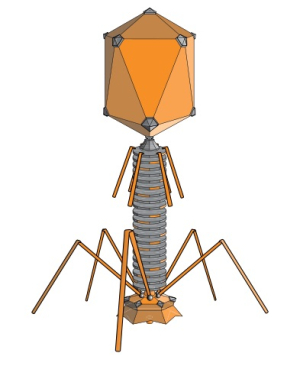 The "love" and "wonderment" behind this work express themselves in the imagination of a ten-year-old coupled with the knowledge of a disciplined, scientific mind. A uni­que mastery of the topic gives Youkle the courage to step outside the often stuffy bounds of technical expository writing. As the title Thinking Like a Phage  suggests, she is not afraid of a healthy dose of anthropomorphizing in the name of aiding understanding. She invites us to shrink ourselves to a nanometer-scale size and view the world as a phage might; to be a phage as it carries out its agenda in a sort of phagey "Fantastic Voyage".

With this device Youle accomplishes a truly remarkable feat: the seamless progression from the most basic con­cepts to complex principles. For example, at the begin­ning of the book we're of­fer­ed simple definitions of "vi­rus", "infect", and "prokaryote", but by midway through we can appreciate the so­phisticated ways in which phages control the timing and quantities of proteins produced during takeover of a host cell. What's more, the concepts are made tangible by the feeling that we've experienced them along with the phages. Also, Youle peppers the text with analogies to tame difficult-to-grasp quantities: for example, did you know that some phages pack their DNA so densely into the newly-assembled capsid that it results in an osmotic pressure com­pa­rable to that experienced 2000 ft below the surface of the ocean?

Entering the world of phages

We know we're in for an adventure just by glancing at the eight chapter titles. Each begins with a capsule summary that invites the reader to climb aboard the phage equivalent of Huck Finn's river raft and share in the journey. For example: "Chapter 5. Escape! In which  the assembled progeny virions depart in concert, each setting out in search of a host of its own . . . ." But first we're of­fer­ed a brief primer on phage basics — their discovery, virion structure and genome types, and basic life cycle — as well as a section on "Essentials of Molecular Biology" for those needing a refresher on the Central Dogma.

Youle's love and knowledge of her subjects shine when she introduces the twenty-one "pheatured phages" in whose trials and tribulations we will share. You see, she lovingly assigns to each phage a nickname that is simple, sweet, and descriptive. "Shy" (ϕ6 ) is so named for its strategy of hiding its genome inside its capsid from entry through exit. Shy needs to do this because it has a dsRNA genome that would normally send up alarm signals to the host cell. Many phages use long tail fi­bers to lasso the flagellum of a target bacterial cell, but Caulobacter phage ϕCbK  uses a long fiber attached to its head instead, earning the nickname "Nerd". Then we have "Slick" (PRD1 ), who steals lipids from the host and uses them to construct its membrane. This membrane functions as a slippery chute by which the phage chromosome passes into a host cell. These monikers save us from chewing on dry, unappetizing names composed of numbers and Greek letters, and help us remember who is who as the cha­racters appear and reappear throughout the narrative. Even­tu­al­ly we feel as though Shy, Nerd, and Slick are our dear friends! 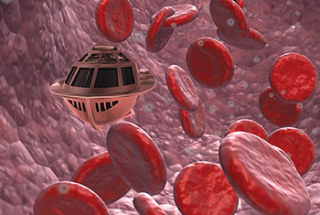 Our introduction to the featured phages is followed by six chapters that take us through each phase of the pha­ge life cycle, starting with "Survival on Arrival, in which  a phage chromosome, newly arrived in a host cell, is im­me­di­a­te­ly set upon by patrolling host defenses. Fear not! . . . ." Youle describes the gauntlet of obstacles thrown in the path of the phage by the infected cell in its desperate at­tempt to thwart it: various nucleases to chop of the pha­ge instructions, such as restriction endonucleases, and the well-honed CRISPR system, that acts as a form of adaptive immunity, allowing the bacteria to store the chopped pieces of infecting phages so that they may recognize similar phages when they infect.

"Production Management" covers the various ways by which phages manipulate the host re­sour­ces to carry out their own agenda – the manufacture of hundreds to thousands of progeny. We learn that the phages may at first appear to help the bacteria during this phase. For example, phosphate, which makes up the "backbone" of DNA molecules, can be scarce in ocean en­vir­on­ments. This is a problem for sea-dwelling bacteria, and a particular challenge for an infecting phage looking to use the bacterium cell to produce phage progeny. But some phages that infect sea-dwelling bacteria have evolved mechanisms for phosphate-scavenging. Other phages help degrade antibiotics, or defuse environmental toxins. These functions aid the host, but only in the name of prolonging its survival so that the infecting phage can better exploit it. 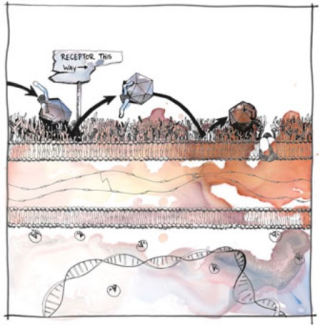 Subsequent chapters cover: the many splendid ways in which phages assemble new virions; the wily escape stra­tegies phages employ to break out of the cell when ready; the journey beyond, in which lucky phages encounter target cells; delivery of the phage cargo into the host, bringing us full circle back to the encounters with host defenses. The alternative lifestyle of temperate phages is described in Chapter 8, "Coalition, in which  the phage foregoes immediate, prolific replication and instead settles in as a prophage embedded within the virocell chromosome . . . ." That is, until some environmental cue triggers them to launch into action, then all you-know-what breaks loose!

Wisdom of the phages

The phage protagonists include a range of genome structures that provide Youle the chance to illustrate the many various ways that phages solve problems. For example, three different phages that each infect Escherichia coli  (E. coli  ) include Minimalist (Qβ ), Lander ( T4  ), and Skinny (Ff  ). Minimalist accomplishes its herculean task using a ssRNA genome with only three genes! Lander, by contrast, has at its disposal 280 genes in its dsDNA genome. And then there's Skinny with its ssDNA genome and ten genes in its program. As you can imagine, these phages, though infecting the same host, "think" in very different ways.

Youle balances her rollicking anthropomorphizing with numerous eloquent reminders that so­phisticated phage innovations occur "without an overarching blueprint of supervision." She asks, "What are the effects of 1031 phages thinking hour after hour, year after year, epoch after epoch?" Add to these numbers the processes of mutation, recombination, duplication, etc., and she urges us to, "Consider the possibilities!".

Adding to the many charms of "TLAP  " are the unique illustrations: Youle's whimsical yet dis­ci­pli­ned approach is mirrored by artist Leah Pantéa, who conveys technical concepts in joyful and dreamy colored ink sketches. Also included are electron micrographs, reminding us that the cha­rac­ters in this story are very real. And supplementing the 272 pages of text are a glossary, index, "further reading" for each chapter, a list of books and online resources, and a brief timeline of the author's ongoing love affair with phages.

TLAP  is a fascinating, well-researched, and highly readable account of all things phagey, suited to a broad audience of life science enthusiasts. Best of all, Youle is planning a sequel, Phage in Com­munity , to explore the role of phages in a larger, ecological context: "It is only at the community level that the essential services provided by the phages become dramatically apparent." Phages have found a worthy and knowledgeable advocate – and friend – in Merry Youle.

Jamie is on the faculty at Boston College, and an Associate Blogger for STC.