« E Pluribus Duo: A Review of Two Recent Books on Microbiomes | Main | Let's Get Ready, Xylella Has Arrived in Europe »

One of my most memorable early lessons in microbial physiology (and one that I still love to chal­lenge general audiences with ) was being asked how long would it take E. coli  cells to reach the mass of the Earth (under conditions of unrestricted growth). It was and remains a wonderful ex­er­cise that allows the learner to begin to discover the remarkable dynamics of exponential growth. For STC readers who have not yet performed this simple exercise, I implore to do so. It's fun! (Oth­ers should feel free to skip ahead to the next paragraph.) To start, make these three simple as­sump­tions: (1) one E. coli  cell has a mass of 10–13 grams, (2) Earth has a mass of 1027 grams, and (3) the doubling time of E. coli  is 20 minutes. How long, then, will it take for the progeny from a single E. coli  cell to reach the mass of Earth? Once you have the answer, keep reading. 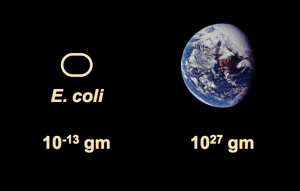 How long until E. coli  reaches the mass of Earth? By R. Kolter

I have to admit that when I first was confronted with this question I had a feeling that it would be a relatively short time. Relative, that is, to the geological age of Earth. But… less than two days? Wow! As the saying goes, I was floor­ed! Knowing full well that only a tiny fraction of Earth has the nutrients to sustain cellular growth, it was evident that a freely growing E. coli  would finish those in a mat­ter of a few hours. Clearly, for the extant populations of Bacteria and Archaea on Earth, that "unseen majority" thought to number some 1030 cells, the periods of un­re­stricted growth must be few and far between. The rest of their existence is, by necessity, spent in periods being energy deprived and not dividing, yet ready to start dividing if and when conditions become propitious for growth. In general, our un­der­stan­ding of cells in such states is very poor. For one, microbiologists interested in describing molecular mechanisms of regulation at play in microbes have largely avoided studying non-growing cells. And many of those interested in energy-limited states have not focused their attention on such things as regulation of gene expression.

It is in the hope of bridging this gap, as a way to stimulate (in their words) "dialectic between en­vi­ronmental and molecular microbiology perspectives," that Megan Bergkessel, David Basta and Dianne Newman from Caltech offer us a wonderful review entitled "The physiology of growth ar­rest: uniting molecular and environmental microbiology." In my opinion, this should be required reading for all microbiologists. This paper is way more than a simple review of the literature. In each of the three main areas of growth arrest physiology that the authors explore, energy me­ta­bo­lism, regulation of gene expression, and DNA maintenance, they not only critically review pub­lished results, they offer their views on future directions that they feel the work should take. The­re­in, microbiologists everywhere can find some key directions to inspire their future work. In ad­dition, three very nicely "boxes" cover the basics of non-growing states, population heterogeneity and new tools for studying non-growing states. Very very fine reading indeed!