The Spell of Coxiella

A few years ago, we celebrated one of the prettiest discoveries in modern microbiology, achieving the growth of Coxiella burnetii outside its host cells in laboratory media (see Coxiella Escapes from Cell!). The excitement was justified, as this organism had been a prototype of a strictly intracellular organism. Best I know, it does not naturally grow outside of cells, despite having the ability to do so.

Particularly inspiring is that cultivation in vitro was achieved by gazing at its genome sequence and thereby gaining a sense of its metabolic needs. A fairly straightforward medium containing amino acids and a particularly high concentration of cysteine along with a low oxygen tension (2.5% O2) did the trick (Figure 1). These host-free-cultured cells retain their virulence. By now, the use of axenic growth technique to grow C. burnetii has become commonplace. 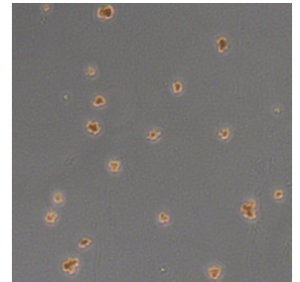 A paper with the provocative title "Horizontally Acquired Biosynthesis Genes Boost Coxiella burnetii’s Physiology" appeared recently. Horizontal gene transfer (HGT) in a normally intracellular organism? Where did these genes come from? Did these sequestered organisms have conjugal visits? Not likely, so the acquisition of new genes must have happened before the coxiellae became prisoners. C. burnetii seems to be derived from its closest relatives, tick-associated coxiellae, which are benign endosymbionts that appear to contribute to the nutrition of their hosts. Antibiotic treatment makes the ticks less fit. The authors say: "…this corpus of data demonstrates that C. burnetii recently evolved from an inherited symbiont of ticks which succeeded in infecting vertebrate cells, likely by the acquisition of novel virulence factors." The inference is that HGT took place before that, most likely even before the organism became a symbiont of ticks.

It is widely believed that HGT is a major — probably the major — actor in prokaryotic evolution. We at STC have devoted quite a bit of space to it (See the post by Christoph Un Tour d'Horizon (1/3). But do not disdain the other two pieces of his trilogy — here and here). An advantage of studying HGT in coxiellae is that, like many endosymbionts, they have a reduced genome (C. burnetii has ~2 Mbp) and, due to selection against unneeded genes, most of the ones present can be expected to be consequential in the organism's particular environment.

The authors used stringent criteria to identify genes acquired by HGT. This is not easy because C. burnetii has few close relatives (Legionella and two other members of the Legionellales, all within the Gammaproteobacteria). Because of the uncertainties in the taxonomic positon of C. burnetii, the researchers excluded genes that may have come from close relatives. They were left with 172 genes that they identified with high confidence as being 'HGT-niks'. Curiously, none of these were carried in the plasmids of this organism. The identifiable genes have relatives in other bacteria, about half being found in members of the proteobacteria (alpha, beta, delta/epsilon), in keeping with the rule that HGT takes place more frequently among related species. These intriguing genes include some that encode for Type IV pili, structures that, for example, enable Acinetobacter baumanii to sop up DNA from the environment. Does this mean that C. burnetii used this mechanism for its HGT? Could be.

Some of the HGT genes are clustered, thus appear to have been transferred en bloc. The authors zeroed in on one particular cluster involved in the biosynthesis of LPS that appears to have been acquired in a single event, possibly from some other gammaproteobacterium. LPS is the best demonstrated virulence factor in this organism (there are many others by now, see here). So, this organism joins the long list of those whose bacterial virulence factors have been acquired by HGT.

The investigators found two other sets of genes, one set involved in fatty acid and biotin biosynthesis, the other in making heme. The fatty acid genes probably originated in a deltaproteobacterium or a spirochete. The arrangement of these genes is practically the same as in Spirocheta africana (again, suggesting that they were transferred simultaneously). In addition, C. burnetii obtained via HGT genes for pyruvate dehydrogenases, enzymes that convert pyruvate into acetyl-CoA (which is needed for fatty acid synthesis as well as ATP generation). C. burnetii also has two copies of the gene required for biotin biosynthesis, one being of HGT origin. Inhibiting the function of several of these genes decreased growth fitness in vitro.

Figure 2 Coxiella burnetii binds to macrophages through αvβ3 integrin, which triggers phago­cy­to­sis through an actin-dependent mechanism. The nascent Coxiella-containing vacuole (CCV) acidifies to pH ~5.4, which is characteristic of nor­mal phagosomal development. By contrast to phagosomes, the CCV also acquires micro­tu­bule-associated protein light-chain 3 (LC3; an au­tophagosomal marker), a process that is de­pendent on bacterial protein synthesis. The nas­cent CCV develops through fusion and fis­sion events with early endosomes and then late endosomes in concurrence with a further aci­di­fi­cation to pH 5, which is characteristic of nor­mal phagosomal development. Lysosomal en­zymes, including cathepsin D (CTSD), start ac­cu­mulating in the CCV by 2 hours after in­ter­na­li­zation, at which point the vacuole is at pH ~4.5. This pause in CCV development might allow con­version of the bacteria from small cell va­ri­ants (SCVs) to the metabolically active large cell variants (LCVs). Between 8 hours and 2 days af­ter in­ter­na­li­za­tion, the CCV expands to occupy an increasingly dominant portion of the cy­to­plas­mic space of the host cell. RHO GTPase is likely to be involved in maintenance of the large vacuole, whereas the recruitment of RAB1B from the ER might facilitate the acquisition of additional membranes to create this spacious CCV. Source

The story of the heme genes has an interesting twist. I was not aware that regulation of heme biosynthesis involves a tRNA, namely tRNAglu. It works this way: the first step in the synthesis of heme is catalyzed in many bacteria by glutamyl-tRNA reductase and glutamate semialdehyde aminotransferase, enzymes that convert glutamate into gamma-aminolevulinic acid, the universal precursor of heme (these enzymes and their connection to heme make for an interesting story in itself, see here). In C. burnetii, this tRNA is not used in protein synthesis but seems to be dedicated to heme production. Mutants in this C. burnetii tRNAglu grow poorly (this organism cannot take up heme from the outside). Interestingly, this tRNA is not present in the non-pathogenic tick coxiellae. The authors suggest that heme biosynthesis could be a target for anti-coxiellal therapy.

Now, you may well ask, does this work further our understanding of the mechanism involved in Coxiella pathogenesis? Perhaps not directly, but it adds to the repertoire of things we know about this organism. As we wrote earlier, this bacterium is the agent of a somewhat rare disease called Q fever (Q is for 'query', even though Queensland is where it was first described). Q fever is a worldwide debilitating disease, something like a really bad flu, which affects both humans and domestic animals. It's highly contagious and highly infective — perhaps a single cell can cause disease. It is classified as a class B bioterrorism agent that has been weaponized and mass-produced under various biological warfare programs. Q fever is a zoonosis, acquired most often by inhalation from infected cattle and other domestic animals.

The most notable feature of C. burnetii pathogenesis is the bacterium's unique ability to survive and even thrive in acidic lysosomes, sites that are extremely inimical to all other known bacteria. One can say that C. burnetii breaks many of the rules for intracellular life. Within its vacuoles (known as Coxiella-Containing Vacuoles, or CCVs), the organisms proliferate to the extent that a CCV can nearly fill the cell. Quite a bit is known about the various steps in pathogenesis. The organisms are 'stealth pathogens' that avoid causing an inflammatory response (which could be lethal to them). See Figure 2 for details of the steps in pathogenesis. Notable is that coxiellal LPS is about 1000x less endotoxic than usual for this molecule but this doesn't mean that other of its activities are impaired, such as helping in evading the immune response and aiding in being taken up by cells. The organism's ability to evade an immune response is connected to the fact that they inhibit apoptosis.

Just how to tie together these facts to the HGT story is not yet clear, but it can be assumed with confidence that further progress will be made in the understanding how this unusual pathogen causes disease.