A Fascination with Caves

I thank Kevin Young for kindly calling this paper to my attention and thinking that it ought to be discussed in this blog.

Caves captivate everybody. They are totally unlike our usual landscape, bewildering and chal­leng­ing in design. No wonder that they attract casual visitors and explorers alike. Among the latter, we count speleomicrobiologists who search such secluded environments for unusual microbiota. The subject is well developed and even the topic of specialized meetings (see for example here). But do not think that a cave is just a cave. Caves have a great variety of niches, each with its own micro­biome. Here we will deal with one kind of cave formation, the 'moonmilk speleothems.' Qu'est-ce que c'est, you ask. 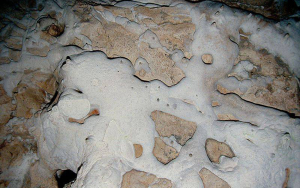 Figure 1. Moonmilk in the Charlottenhöhle near Giengen-Hürben, Germany. Source. Frontpage: Not a speleothem (Elio's pho­to)

Speleothems, a term that I had not encountered before. It refers to secondary mineral deposits in caves (from the Greek σπήλαιον for cave, "them" from θέμα, for deposit). Think stalagmites and stalactites. According to Wikipedia, there are 319 known varieties of speleothems, most made of calcium carbonate in the form of calcite or gypsum.

Moonmilk is the strange name given to white deposits on cave surfaces (suggesting frozen moon beams ?). This ma­terial is rather soft and gooey when wet, something like cream cheese (moonmilk is also the name given to a milk-based remedy for sleeplessness). When dry, it becomes crumbly and disintegrates into a powder. Moonmilk con­sists of unusually fine crystals of calcium carbonate in various chemical forms. It is quite common in karst caverns, those formed by the dissolution of carbonate rocks such as limestone or gypsum. We discussed their microbiology in a prior post: In a Cavern, in a Canyon...  Prehistoric artists used their fingers to make patterns on moonmilk on cave walls and, much later, it was used as a reme­dy for acid stomach reflux and to heal cuts in cattle. 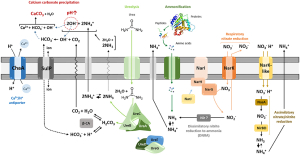 (Click to enlarge) Figure 2. Heterotrophic path­ways associated with carbonatogenesis presu­med to occur in Streptomyces species. Micro­bi­ally mediated carbonate precipitation might be either linked to active transport of calcium ions across cellular membrane through Ca2+/2H+ an­tiporter system, ChaA, or to nitrogen cycle-rela­ted pathways: ureolysis, ammonification, and dissimilatory reduction of nitrate to ammoni­um/ammonia (DNRA). All those pathways lead to alkalinization through the generation of am­monium, shifting the equilibrium toward carbo­nate/bicarbonate ions, which, upon the presen­ce of calcium, precipitate as calcium carbonate (CaCO3). ChaA locally increase pH through simul­taneous incorporation of protons. The urease ac­tivity seems to be linked with cytoplasmic car­bonic anhydrases (β-CA), which catalyze dehy­dra­tion of carbonic acid produced during ureo­lysis into carbon dioxide that can constitute an additional source of bicarbonate ions for preci­pitation. The export or import of bicarbonate ions could be potentially mediated via the sul­fate transporter family protein in cluster with CA (SulP-type permease). Assimilation of orga­nic nitrogen from amino acids releases extracel­lular ammonia through deamination. The inor­ganic nitrogen source (NO3−), which is import­ed in Streptomyces by Nark-type transporters, can participate into biomineralization exclusive­ly through dissimilatory reduction to ammonia mediated by respiratory nitrate. Reduction of nitrite to ammonia in streptomycetes operates through assimilatory pathway catalyzed by NasA and NirBD reductases. Source

Microbially-induced carbonate precipitation (calcification) takes place in several ways. It may be due to the action of either autotrophs (for example, photosynthesizers or me­thanogens) or heterotrophs. Autotrophs are not often found in caves, leaving heterotrophs as the likely agents of moonmilk genesis. How they do it is not fully under­stood, but raising the local pH to about 8.0 seems to be a good contender. CaCO3 precipitates under alkaline con­di­tions that ensue from the microbially-induced accumula­tion of ammonia due to the breakdown of urea, the cata­bolism of amino acids, or nitrate reduction. A lot of bacte­rial biochemistry may be involved here, as witnessed by the intricacies seen in Fig. 3. Additionally, a prevailing no­tion of moonmilk formation includes a second possibility, that bacteria and fungi act as nucleation centers for cal­cification.

Microbial processes are thought to act during the early stages of moonmilk formation, and are eventually taken over by abiotic processes. Later growth of moonmilk formations probably takes advantage of the incessant drip of carbonate-containing water into a cave. Notice that moonmilk deposits can get to be one meter thick.

Previous work proposed that a large variety of microbes may be involved in moonmilk-o-genesis, including Bacte­ria, Archaea, and Fungi, with filamentous forms being most prominent. The Actinobacteria loom large in this list, with their cell walls possibly acting as the nucleation centers. Because our understanding of this process is incomplete, the authors of this paper were prompted to undertake a systematic investigation on the origins of moonmilk.

The source of material in this study was a 70 m long and 20 m wide Belgian limestone cave known as 'Grotte des Collemboles' (Cave of the Springtails). The researchers isolated 31 distinct Streptomyces phyloty­pes and looked in their ge­nomes for genes involved in ammonia formation. For example, genes for urea breakdown, nitrate/nitrite reduction, and others. On the surface of the samples, the au­thors found filaments known as needle-fiber calcite and compact nano-fibers, possibly consisting of thin Actinobacteria, their unusual thinness probably being due the oligotrophic or nutrient poor environment (see here for substantiation). Unlike common streptomycetes, these structures did not show much branching. Figure 3. SEM-images of nano-size filaments found in the crystal structure of moonmilk de­posits from the "Grotte des Collemboles". a among typical moonmilk monocrystalline rods and polycrystalline fibers indicated by white ar­rows one sees b dense meshes of tiny fila­ments, which were compacted into the stacked pellets or c dense biofilms, mostly randomly ori­entated, but d occasionally one-way directed. Source

Just being there and providing nucleation centers probab­ly does not suffice for moonmilk formation. How about raising the pH? About half the isolates had ureolytic acti­vi­ty in the lab, two of them being extra-strong at it. Most of the strains carried the corresponding genes in their ge­­nomes, some in several copies. Also common were genes for carbonic anhydrase, an enzyme that converts bicarbo­na­te into the CO2 needed for biomineralization. So were other genes involved in inorganic ion transport and meta­bolism that may be involved. In addition to mes­sing with the pH, bacteria may also be directly involved in calcium carbonate mineralization by actively transporting calcium ions. In fact, they found the genes for a Ca2+/2H+ anti­porter in half their isolates.

Now for making moonmilk in the lab. Can the strepto­my­ce­tes do it ? The authors selected strains that had strong ureolytic and ammonification activities, probably the two most significant activities involved in the process. After growing them for several months on urea-containing medium, they found abundant calcite deposits on the colonies. No urea, no deposits. The nature of the deposits was confirmed by looking under polarized light plus by backscatter electron and elemental X-ray analysis. 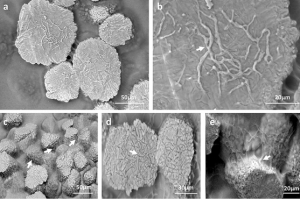 Figure 4. Biogenic signatures within mineral de­posits produced by moonmilk-originating Strep­tomyces in culture (Images using low vacuum-SEM-backscattered electron detector). Numer­ous bacterial imprints are seen, along with the different morphologies of mineral deposits spe­cific to the culture conditions used. Streptomy­ces filaments are completely incorporated into the produced minerals, as observed for strains MM99 (a, b), MM24 (c–e) in CPA medium, as well as for MM99 (g) and MM24 (i, j) in modified B-4 agar. Their mineralization also appears as wrinkles each containing a bacterial filament suggesting their progressive encrustation within the mineral (b, e, arrows). See text of paper for details.

The authors propose that the strep­tomy­ce­tes they iso­la­ted have the metabolic potential to promote calcifi­cation, although perhaps not all by the same pathway. They say: "These findings, supported by microscopy observations of bacteria-like filaments in moonmilk deposits and crus­tal formed by individual moonmilk-originating bacteria confirm its biogenic origin and the importance of fila­men­tous Actinomycetes in its genesis. However, the meta­bol­ic activities evaluated  in vitro were not always related to the genetic predisposition of individual strains as some isolates with grater genetic potential remained meta­bo­li­cal­ly silent. This may suggest that they were grown under conditions too different from those encountered in their original niche to trigger the investigated activity or that the specific environmental cues are required for their ac­tivities. Consequently, whether these processes are in­deed active in situ also remains an open question." They also point out that the uncultivated microbes endemic to moonmilk, which are the large majority, were not includ­ed in these or other studies. They think that a proteomic analysis will tell. Perhaps they will come up with the ans­wer to the fundamental question of why do carbonates become moonmilk and not other shapes and forms?

I, for one, appreciate how complex the study of the microbiome of a natural sample can be. Lots of factors, lifeless and living, come into play and their interactions are staggering in number. This study is a good example of how hard it really is to figure out even something as simple sounding as making 'milk' in a cave.

This paper was discussed in the podcast This Week in Microbiology (TWiM), episode 157.