…one would have to say that natural selection does not work as an engineer works. It works like a tinkerer – a tinkerer who does not know exactly what he is going to produce but uses whatever he finds around him…to produce some kind of workable object.
– François Jacob, 1977 (1)

You may wonder why you read the same motto twice in a week in STC but there's a reason. I will follow up Merry's recent post, her lucid description of in silico and in vivo experiments demon­strat­i­ng that evolution can achieve complexity by small incremental steps if they confer some mar­ginal benefit. No "big leaps" are required, no "master plan" – tinkering is sufficient. If you have some ex­perience with DIY projects you know you can tinker all your way to a solution that "works just fine", given you're patient enough. In some cases you probably realize afterwards that the solution you found is way more complicated – or even more complex – than necessary. But you keep and use your overly complex DIY solution because it, well, works just fine. Thus, if evolution were a tinkerer rather than an engineer – as François Jacob proposed, and for which Merry discussed available evi­dence – biologists should also find examples for such unnecessarily complex solutions that oc­cur­red... by accident. Solutions that would increase the complexity of a system without providing any apparent benefit that could be selected for.

The case of the fungal V-ATPases

Among the most highly conserved enzymes throughout all of life are the multi-subunit ATPases of the F-, V-, and A-types. These enzymes couple the transport of H+ or small cations (Na+, K+, Ca2+) across a membrane to the synthesis and/or hydrolysis of ATP. They share a similar dynamo-like ar­chitecture with a membrane-embedded domain ('rotor') that transports ions across this membrane, and a cytosolic domain ('stator') that, depending on the direction of rotation of the rotor domain, either hydrolyzes or synthesizes ATP. Earlier, we featured the bacterial F1Fo ATPase (ATP synthase) in our Pictures Considered series. The eukaryal vacuolar-type H+-ATPases (V-ATPases) pump H+ ions across intracellular and plasma membranes driven by the hydrolysis of ATP and acidify vacuoles (among other functions). The Vo domain ('rotor') of the eukaryal V-ATPases are ring-shaped protein multimers – 'hetero-hexamer's in precise terminology – of five Vma3 subunits and one Vma16 sub­unit. What is true for Animals and Plants is not necessarily also true for the Fungi: the Vo domain of those Fungi for which sequence data are available is assembled from four Vma3 subunits, one Vma11 and one Vma16 subunit (Figure 1a). This apparent increase in complexity of the fungal ver­sion of the V-ATPase prompted Joe Thornton and his coworkers, then at the University of Oregon, to study the Vo domain of Saccharomyces cerevisiae  in more detail (2). 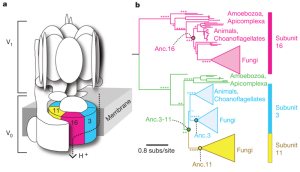 (Click to enlarge) Figure 1. Structure and evo­lu­tion of the V-ATPase complex. a In S. cerevisiae, the V-ATPase contains two subcomplexes: the octameric V1 domain is on the cytosolic side of the organelle membrane, and the hexameric Vo ring is membrane bound. Protein subunits are labeled and colored: Vma3 (blue), Vma11 (yel­low), and Vma16 (red). b Maximum likelihood phylogenetic tree of V-ATPase subunits Vma3, Vma11 and Vma16. All eukaryotes contain sub­units 3 and 16, but Fungi also contain subunit 11. Circles show ancestral proteins re­con­struct­ed in this study. Colors correspond to those of subunits in panel a; unduplicated orthologs of Vma3 and Vma11 are green. Asterisks show ap­proximate likelihood ratios for major nodes: ****, >103; ***, >102; **, >10; *,<10; ~, <2. Source

They first inferred the phylogeny of the Vma3, Vma11, and Vma16  protein family using the sequences from 139 ex­tant species (Figure 1b). Their phylogeny indicates that Vma3 and Vma11 are paralogs, that is, sister proteins. They are, in all likelihood, descendants of an ancestral pro­tein (in Fig. 1b: Anc.3–11) whose gene was duplicated ~800 million years ago in the last common ancestor of all Fungi. It seems likely that the Vma3/Vma11 and Vma16 lineages also descend from an older gene duplication deep in the eukaryotic lineage. But due to the scarcity of sequence data this was presently impossible to prove as no meaningful 'outgroup' could be included in this phy­lo­ge­netic analysis.

I should mention here that gene duplications are very common in all domains of Life. For example, about 30% of the genes of the E. coli may have their origin in dup­li­cations. Gene duplications arise from 'hiccups' of the rep­li­cation machinery that are not immediately repaired but become fixed in a genome if they confer some selective advantage. One example was given here in STC: an an­ces­tral fungal gene coding for a transporter of basic ami­no acids was accidentally duplicated and both copies kept because one copy, LYP1, differentiated further into a lysine permease while the other, ALP1, dif­fe­ren­ti­a­ted into an arginine permease.

Finnigan et al. took their approach one step further and 'guesstimated' by a maximum likelihood algorithm the ancestral amino acid sequences with the highest probability of producing the extant sequences (2). This, in turn, allowed them to reverse engineer the ancestral proteins Anc.3–11 and Anc.16 that should have made up the ancient two-paralog eukaryotic ring of the Vo subcomplex, and, in addition, the duplicated subunits Anc.3 and Anc.11 from the three-component ring in the common ancestor of all Fungi (Figure 1b). They were then ready to put these in silico results under scrutiny in vivo.

S. cerevisiae strains lacking components of the Vo ring of their V-ATPase remain viable but loose the ability to grow at elevated Ca2+ concentration. This allowed Joe Thornton and his coworkers to test their bona fide 'ancestral' proteins in a comparatively simple complementation assay by in­tro­duc­ing plasmid borne ancestral genes into reciprocally deficient yeast cells. Functionality of the in­troduced genes would result in restoration of growth of the re­cip­i­ent yeast cells at elevated Ca2+ concentrations. They found that Anc.3–11 rescues the growth at elevated Ca2+ concentrations of either vma3Δ or vma11Δ yeast mutants, indicating that the functions (= oligomerization pro­per­ties) of the present-day versions of Vma3 and Vma11 were already present before the duplication that generated them. In addition, Anc.3–11 could partially rescue growth of a vma3Δvma11Δ double mu­tant, which neither of the present-day versions Vma3 and Vma11 could. The reconstructed Anc.16 rescued growth in a vma16Δ mutant, and co-expression of Anc.3–11 and Anc.16 together rescued cell growth in a vma3Δvma11Δvma16Δ triple mutant lacking all three ring subunits. These results established that during the increase in complexity, neither the Vo complex nor its component pro­teins evolved new functions required for growth under the conditions in which the ring is known to be important.

By continuing this 'recombinatorial game' for the three-component ring system, they found that Anc.3 rescues growth of a vma3Δ mutant but not of a vma11Δ mutant, while, reciprocally, Anc.11 restores growth of a vma11Δ but not of a vma3Δ mutant. And, finally, coexpression of Anc.3 and A.11 was necessary to rescue growth of a vma3Δvma11Δ double mutant. These results indicated that after their origin by gene duplication, Anc.11 lost the ability of its ancestral protein, Anc.3–11, to carry out at least some functions of Vma3, while Anc.3 lost the ancestral capacity to carry out those of Vma11. 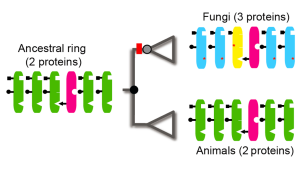 Figure 2. The ancestral Vo ring of the V-ATPase complex had two types of subunits (red, green). Black squares, triangles and circles show inter­faces of the proteins that can bind to other sub­units via interfaces marked with corresponding holes. In fungi, one of the genes duplicated (red square), producing two types of subunits (blue, yellow). Some of the subunits lost sites where other subunits could bind, marked here by red asterisks. (Subunit colors as in Fig. 1). Source

Earlier studies had established the highly ordered spatial arrangement of the Vma16, Vma11, and Vma3 subunits in the Vo ring of the yeast V-ATPase, constrained by the capacity of each subunit to form specific interfaces with the other subunits (Figure 2 shows schematically the sub­unit arrangement in a 'linearized' version). Vma11 (yellow) is restricted to a single position between Vma16 (red) and Vma3 (blue), because its right "arrow hole" interface can only bind to the "arrow" interface on the left side of Vma16 and its left "square" interface can only bind to the "square hole" interface on the right side of Vma3. Vma16 is re­strict­ed to a single position between Vma11 (yellow) and Vma3 (blue), because its "circle hole" interface on the right side can only bind to the "circle" interface on the left side of Vma3. Only Vma3 can bind either to cop­ies of it­self, or to Vma16, or to Vma11. Because Anc.3–11 can complement the loss of both Vma3 and Vma11, Finnigan et al. assumed that Anc.3–11 could participate in all three specific interaction interfaces, and that these capacities were then partitioned between Anc.3 and Anc.11 after the duplication of Anc.3–11. To test this they created a set of reciprocal gene fusions and tested them for growth restoration in the presence of elevated Ca2+ concentrations in the appropriate yeast mutants. They could thus establish that subunit interactions occur in the resurrected proteins in the same manner as in the present-day versions of Vma3 and Vma11. Anc3 and Anc.11 had apparently both lost each one in­teraction interface due to mutations early after duplication of the ancestral Anc. 3–11 gene.

In summary, the results obtained by Finnigan et al. make a strong argument for the view that ar­chitectural complexity of molecular assemblies can increase when a few mutations degrade an­cest­ral interfaces but leave other functions intact. The specific roles of the Vma3 and Vma11 subunits of the Vo subcomplex seem to have been acquired when the duplicated genes lost some, but not all, of the capacity of the ancestral protein Anc.3–11 to participate in interactions with copies of itself and the other protein required for proper ring assembly, Anc.16. Because complementary losses occurred in both lineages, the two descendant subunits became obligate components, and the complexity of the ring increased. This "complexity by accident" found for the fungal V-ATPases and, for instance, the evolution of pre-translational RNA editing (not to be confused with RNA splic­ing) have led to the concept of 'Constructive Neutral Evolution' (CNE), which challenges the more classical view of selection as the sole source of creativity and direction, as the only force that can cause trends or build complex features. This debate goes on... it's science, after all!

Christoph Weigel is lecturer at Technical University Berlin, and at HTW, Berlin's University for Applied Sciences. He's an Associate Blogger for STC.