Curious indeed is an organism  called  Kakabekia barg­hoor­ni­ana. It is known to exist both as an ancient fossil and as a present-day cultivable creature. Just as curious is that it has been shuttled across the great biological di­vide, now to apparently having landed firmly in the eukar­yotic camp. However, there still seems to be no genomic information about it and little is known of its cell structure. At least we known the origin of the name: it was found at the bottom of the great Kakabekia Falls in Ontario, where the force of the water exposes ancient fossil-rich strata. The species is named after the famed paleontologist Elso Barghoorn, who first described it.

Kakabekia barghoorniana  became known from examination of fossils of the Middle Precambrian, ca. 2 x 109 years of age. It looks plenty odd, typically a bulbous cell connected by a 12 – 20 µm stem to a 5 – 30 µm wide umbrella-like shape with 6 – 8 radial spokes. Variations in shape are common and similar shapes have been found living in samples from soil sites in various parts of the world. The unusual and distinctive shape of the two makes the connection between fossil and living form particularly persuasive. By contrast, simple shapes of fossils are not always easy to assign with as­surance to living form. This organism is particularly well described in MicrobeWiki. 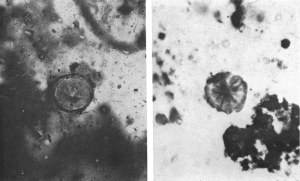 In keeping with the rest of the story, we don't know much about the organism's ecology, but what  little is known about its physiology is thought-provoking. Today's K. barg­hoorniana possesses an unusual metabolism, having an obligate requirement for ammonia that cannot be met by other nitrogen sources and which may be good for living in an ammonia-rich planet (of which there are 24 billion in our galaxy). It does not care if oxygen is present or not. It has a variable array of oxidation-related enzymes, such as oxidases and peroxidases, suggesting that the genus may be in a state of flux regarding oxygen metabolism. How about the ancient habits of the fossil kakabekias? They are likely to have lived along iron-oxidizing bacteria in shallow lakes or seabeds, with high oxygen con­cen­tra­tion. They may have lived under conditions quite similar to those of today's forms.

At an age when so much is known about so many microbes that you can tell almost the brand of toothpaste they use, it's strange that basic information about such an interesting organism as Ka­kabekia is lacking. I hope somebody gets busy with it soon.

I thank Nic DeCarlo for calling this strange beast to my attention.