Offhand, what can you say about the enzymes of the earliest cells? Surely, a few things pop up, for example, they were fewer in number and probably simpler than the ones we have now. They must have had fewer frills than the modern ones, which tend to have clear-cut tastes for substrates and are very efficient in catalyzing reactions. Ancient enzymes were likely to be more promiscuous in their activities, which suggests that ancestral cells could make do with a small number of them. How­ever, these enzymes were likely good at multitasking, catalyzing distinct reactions, which is in keeping with the notion that early cells had small genomes. This idea is referred to as the Yčas/Jen­sen model, after the two people who proposed it independently in 1974 and 1976, respectively. In time, evolution took care of mak­ing larger genomes, allowing enzymes to become more varied as well as more specific. The fact that many modern enzymes have multiple activities may reflect the persistence of vestigial pro­per­ties of the older enzymes. And one or more of such vestigial pro­per­ties may be, in many cases, no longer physiologically relevant today. Using such thinking, phyloge­nic approaches have helped to resurrect what may be ancestral enzymes (see here and here).

Here I will deal with two papers on the topic of ancient enzymes, each with its own trajectory. The first one tries to substantiate the point made above, that the early enzymes carried out more than one activity that was physiologically pertinent back then. Eventually, these activities were taken over by separate, more specific enzymes. The authors of this paper reason that the existence of enzymes that resem­ble the ancient ones may be best revealed in cells with reduced genomes. The second paper claims what may superficially seem like the converse, that ancient enzymes were li­mited in their catalytic repertoire. However, these authors proposed that this limitation is solely in the ability of these enzymes to function in viral replication. On reflection, the two are separate ar­guments, thus both may be right.

In Search of Primitive Enzymes

A New Zealand group led by Wayne Patrick examined in some detail modern enzymes with mul­ti­ple activities one of which is likely to be a relic. The authors define the enzymes of interest here as having a single active site that carries out more than one catalytic reaction. One such known en­zyme is E. coli ’s cysta­thio­nine beta-lyase (CBL), which, in addition to being responsible for a late step in methionine biosynthesis (making homocysteine), also has alanine racemase activity (the in­terconversion of L- into the D-alanine required for peptidoglycan biosynthesis). However, in E. coli, the physiologically relevant racemase activity is not carried out by CBL but by a different enzyme, alanine racemase (ALR), suggesting that the ra­ce­mase activity of CBL is vestigial and probably phy­siologically immaterial (Figure 1). 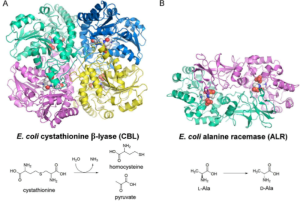 Figure 1. Structure and function of CBL and ALR. A The CBL tetramer, which adopts fold type I. The β-elimination react­ion catalyzed by CBL in methionine biosynthesis is shown below the structure. B The fold type III ALR and the react­ion it catalyzes to provide D-alanine for pepti­doglycan biosynthesis. In each structure, the PLP cofactors are shown in space-filling format. © The American Society for Biochemistry and Molecular Biology

If you're still with me, you will recognize that CBL is a good candidate for a pri­mordial-like enzyme such as pre­dicted by the model. If so, do any contemporary bac­teria carry out two biochemical activities with a single en­zyme like CBL? Examining a bunch of genomes, they found the genes for such an enzyme in only three species, all with reduced genomes: Pelagibacter ubique, a Wolbachia en­dosymbiont of drosophila, and Thermotoga maritima. They looked in these strains for possible gen­uine ALRs but found none, meaning that the resident CBL can be assumed to be the one that carries out the race­mase function. The CBL of these three bacte­ria then re­presents the kind of pri­mordial bifunctional enzymes the inves­ti­ga­tors were looking for. And not only on paper! At 37°C, expression of each enzyme rescued an alanine ra­cemase knockout strain, E. coli MB2795, as quickly as expressing E. coli ALR itself.

Given that so many enzymes are in fact multifunctional, the authors propose that examples of pri­mordial-like en­zymes are abundant. In their words: 'We… suggest that esoteric enzymes – such as the poorly-active multifunctional ones we have characterized in this study – represent the rule, and not the exception, in the biosphere.' The search should be straight­forward: consider enzyme X that has a second minor activity that in most species is carried out pri­marily by enzyme Y and look among cells with reduced-genome for enzyme X where Y is absent. In such cells, enzyme X should qualify as a potential primordial type that may have been present in early cells. Sounds a bit like using synthetic lethal technology. 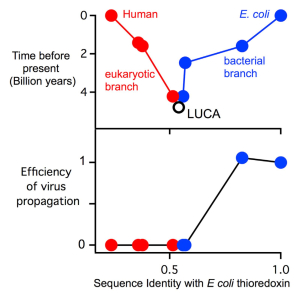 Let's now jump into the second question. Primitive en­zym­es, multifunctional though they may have been, are not likely to be functional in viral multiplication (many phages use host enzymes for their transactions). Viral high-jacking of host functions must have evolved quite a bit later, perhaps along with the viruses themselves. This is the subject of a recent paper by a highly experienced group from the University of Granada, Spain led by José Sanchez-Ruiz. They argue that substituting a mod­ern en­zyme ‒ one that works for both host and virus ‒ with one that works for the host only should inhibit viral de­ve­lop­ment.

The proof of concept relies on experiments with thio­red­ox­ins, small redox enzymes that are probably found in all organisms, where they perform a myriad of functions. In bacteria, they participate in transcriptional regulation, en­ergy transduction, and oxidative stress response, among others. Of interest here is that thioredoxin functions in DNA replication, both bacterial and viral. In coliphage T7, thioredoxin works as a 'processivity factor' that increases the number of nucleotides traversed by the replication complex from a few bases to several hundred bases per binding event. Now a bit of biochemistry: thioredoxin binds with great affinity to T7 DNA polymerase via a 78-amino-acid fragment known as the thioredoxin-binding domain. This binding apparently changes the conformation of the DNA polymerase to enhance its docking on the DNA and keeping the rep­lication complex from hopping on and off.

We're getting to the point. The authors proposed using an­cestral proteins to test the prediction that these would work with E. coli  but not with phages. You obviously can­not order such enzymes from your supply house, but they can be resurrected using phylogenetic information. Recon­struct­ing ancient proteins has become a fun field of study of its own (see a review here). In fact, ances­tral thioredoxins that represent very ancient forms (Pre­cam­bri­an) have been prepared and studied. They are both active and extra-thermostable. How did the authors per­form such a revival? In brief, they undertook extensive phylogenetic analyses and, from their position on evo­lu­tionary trees, they selected the genes likely to have en­cod­ed old enzymes (Figure 3). The next steps are straight­forward: am­plify the appropriate fragments using PCR, clone them into a suitable vector, express the proteins in E. coli, determine their properties.

So, what did they find? First, E. coli  can grow without its two thioredoxins (yes, it has two), but at a slower rate (how I wish the authors had plotted their growth data on semi-log paper, which allows one to com­pare growth rates directly). Introducing genes for ancestral thioredoxins restor­ed the faster growth phenotype. They tried a number of candidates for growth restoration (Figures 2 + 4). The enzyme that was best at it was one derived from the last common ancestor of Cyanobacteria and the Dei­nococcus-Thermus branch, bacteria that are likely to have lived in ancient high-tem­pe­ra­tu­re en­vi­ronments (the 'resurrected' thioredoxin denatures at temeratures >123°C). Now for the key ex­pe­riment, testing the growth of phage T7 in these strains. Sure enough, the phage did not grow. They say: 'The implication is that ancestral thioredoxins that show substantial redox functionality within E. coli  (as determined by their capability to rescue the slower-growth phenotype of an E. coli  trx‒ strain) do not allow (or substantially limit) phage propagation in E. coli.' They further say: 'In the specific case studied here, we had to "travel back in time" to 2.5 billion years ago… to find an an­cestral thioredoxin that prevents propagation of bacteriophage T7 in E. coli.'

Figure 4. Effect of precambrian thioredoxins on the propagation of bacteriophage T7. Efficiency of T7 propagation in E. coli  complemented with human and ancestral thioredoxins (left panel). Data are given as percentage of the maximal efficiency with E. coli  thioredoxin. Generation times at 37°C are displayed in the right panel. Source

Not only are these considerations of specific interest, but they may have applications. Substituting the gene for a native enzyme involved in viral reproduction for the an­cestral single-minded one may make a plant or animal resistant to the virus. The authors outline a protocol that may be rele­vant here. They point out that viruses would have a hard time mutating to the use of ancestral pro­teins with limited capabilities. Thus, a host that received an analog of an ancient enzyme would be­come immune to the virus. Such gene substitution may not be feasible throughout, but in some in­stances, perhaps with plants, they may have practical applications. Worth a try, no?

Isn't it surprising that old enzymes tell stories? And good ones, at that.

We discussed this paper in This Week in Microbiology (TWiM), episode 157.