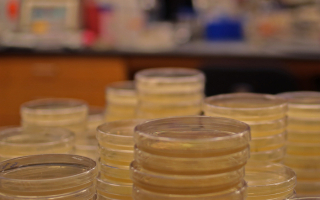 One of the features I most treasure of the nearly fifty years I have been involved in science has been the capacity to take time and simply think. Call it a privilege, call it a luxury; I call it a necessity. And so I take a few minutes now to sit with my eyes closed and think. I think back and recall some of the earliest memories I have of carrying out experiments in the lab. I weigh out the ingredients for making LB plates, I later pour the plates and become thoroughly engrossed in watching the flame from the Bunsen burner eliminate all the bubbles remaining in the molten agar and obtain a perfectly smooth surface upon which I later slide the platinum tip to streak out bacteria to obtain single colonies. I remember the joy of entering the warm room the next day, take out the plates and, as the following experiments unfold, invariably think about the knowledge I might gain from studying these remarkable creatures. There is a wonderful sense of freedom in those memories, their naïvité unfettered by thoughts of funding, publishing, or job security.

Thoughts of funding, publishing and job security do form part of every scientist's life, as well they should. But you'd have to live in a different planet to not realize that these issues now loom very large in the minds of scientists, particularly those starting out. During the last ten to fifteen years I have noticed a troubling growth in the concerns of those who train in my laboratory regarding their ability to publish their work in the "right" journals because such papers are "needed" to get a job. Things have changed dramatically in the last five decades and now science is, by and large, being carried out in a very different environment.

There are many reasons behind this growing concern with matters of funding and publishing. For one, there are many more scientists now competing for jobs and funding. It is not unreasonable to think of research in the biomedical sciences today as being in a state of crisis. This has been extensively discussed and the discussion needs to continue. To me, a key thought-provoking essay presenting both the state of crisis in biomedical research in the United States and suggesting some guidance was written by Bruce Alberts and colleagues in 2014. Though now more than three years old, I still highly recommend it as material on which to base extensive discussions. The short abstract of this essay sums its message perfectly: "The long-held but erroneous assumption of never-ending rapid growth in biomedical science has created an unsustainable hypercompetitive system that is discouraging even the most outstanding prospective students from entering our profession — and making it difficult for seasoned investigators to produce their best work. This is a recipe for long-term decline, and the problems cannot be solved with simplistic approaches. Instead, it is time to confront the dangers at hand and rethink some fundamental features of the US biomedical research ecosystem." It is the starkly clear lack of sustainability of this hypercompetitive system that most concerns me and thus I seek that more and more scientists openly discussi these matters. In the spirit of stimulating that discussion I hope to present in this forum, from time to time, relevant commentaries on published opinions that pertain to how science is carried out. Recently, two open access pieces have struck me as very important and provided me with additional food for thought.

The first of the two pieces is authored by Michele Pagano, chairman of biochemistry at NYU, and appeared in Nature on July 27. (I thank my wife, María Mercedes Zambrano, for bringing this essay to my attention.) The title of the piece basically says it all: "Don't run biomedical science as a business." Pagano puts forth the thesis that an undesired consequence of the doubling of the NIH budget between 1998 and 2003 was to increase the workforce and the number of products marketed to scientists while at the same time doing little to increase excellence. Rather, the rapid infusion of funds "fuelled an idea that academic science is a business that has to sustain constant yearly growth." But — as all microbiologists know from the behavior of bacterial cultures — such exponential growth was not sustainable. In the relative stationary phase of funding that has followed "the exploitation of cheap labor provided by a surplus of graduate students and postdoctoral fellows " was promoted. This exploitation fed into the hypercompetitive environment among job seekers to aim to publish eye-catching papers in high-profile journals, often sacrificing quality. Pagano suggests that to reset the system, everybody must play a part. For example, he implores administrators to realign their goals with the academic mission of their institutions and individual scientists to focus on excellence and rigor over numbers of papers and amount of grant funds.

The second piece is an interview of John and David Krakauer published on August 7 in Current Biology. John is President of the Santa Fe Institute and David is professor of neuroscience at Johns Hopkins Medical School. (I thank Gleb Pishchany, a post-doc in my lab, for alerting me to this piece.) While the entire interview provides many insights from two outstanding scientists, I want to highlight here their answers to the question: What is wrong with science? John does not mince words, he starts out strongly: "There is a LOT wrong…" His message is clear; in his opinion THINKING (my emphasis ) in science has been crowded out and has been replaced with the horror of a twisted academic system that provides incentive to publish "ever-shorter fragments that must burn ever more brightly to get attention. The journals revel in this superficiality, with articles increasingly reading like a combination of a TED talk and a needlessly complicated cooking recipe." In his answer to the question, David provides almost poetic closure to his brother's comments: "It is high time we returned to our roots in radical, deep and irreverent scholarship of the sort discussed in the rich philosophical and historical work…" and goes on to cite some examples of philosopher-scientists that greatly influenced him. 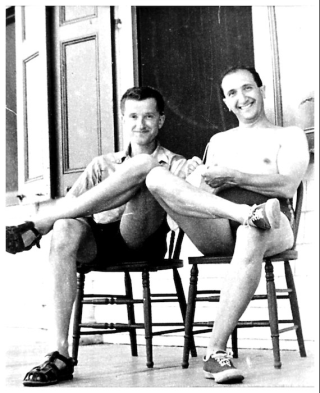 So let me end this short essay with this most telling photograph of two scientists that greatly influenced science in the mid-20th century, in my mind exemplars of radical, deep and irreverent scholars. In my view, this photograph — taken in 1953, ten years after the publication of their landmark paper on the origin of phage resistant mutants — speaks volumes regarding the way they lived their science. Max Delbrück and Salvador Luria, with their thinking, led the way for what was to become "molecular biology." They did not publish great quantities but what they did publish exemplifies excellence in science. And their influential work was largely done before the NIH established a program of extramural research grants and fellowship awards and certainly before the existence of the insanity of journal impact factors. THINK about it…