Vertebrate genomes are teeming with sequences from retroviruses that have infected the cells of the germ line over the course of evolution. Known as endogenous retroviruses (ERVs), the vast majority of these once fierce foes have been defanged by mutations that make them incapable of expressing viral proteins, let alone infectious particles. A few of the more recently acquired ERVs, however, still have their teeth. As long as key viral regulatory and coding sequences are intact, they can copy and paste themselves to new locations within the host genome. Elements that use this copy-and-paste mechanism are known as retrotransposons, and include LINEs and SINEs in addition to ERVs. Regardless of the source, retrotransposition is mutagenic, causing damage to the host if new copies insert in a location that interrupts a gene or important regulatory element. In fact, some 10% of the germline mutations found in lab mice arise from ERVs jumping to new locations in the genome.

Human genomes are pretty good at keeping ERVs and other transposable elements (TEs) in check, largely by throwing obstacles in the path of the their transcription. For example, modifying the histones that form the nucleosomes around which the host chromosomal DNA is wrapped can prevent host transcription factors from accessing TE promoters, thereby repressing transcription. For ERVs in particular, the host adds a trimethyl group to the 3rd lysine residue of histone 3, producing what is affectionately known as an "H3K9me3" mark. These marks are a bit like thumb tacks that pin down sites on the chromosomes so that they can't be transcribed, and different types of TEs are repressed by different "colors" of thumb tacks.

Histone marks are not permanent, but can be reconfigured to suit a particular context. This flexibility allows for liver cells to be liver cells and not heart cells, even though the two cell types have the same genome. The different patterns of histone marks in each type of cell result in expression of different sets of genes. Similarly, differences in the positions of histone marks define cancer cells, which express a different set of genes than their healthy counterparts (for more on this magnificent topic, see this review).

There are times during the lives of some cells when all the thumb tacks need to be shaken loose, a process known as epigenetic reprogramming. This clearing of the slate occurs during the formation of sperm and egg cells, and embryonic stem cells, which need to be able to go down any of a number of different developmental pathways (in other words, they need to be pluripotent). But here's the conundrum: how to keep the ERVs from running amok in the cell during this vulnerable period when the usual method of suppressing them is lifted? 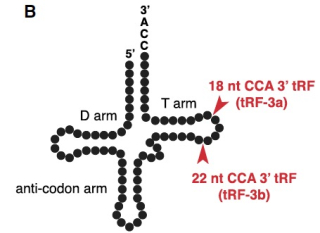 Figure 1. 18-nt and 22-nt fragments (tRFs) are cleaved from the C-terminus of a mature tRNA molecule. Source

Researchers interested in how stem cells handle this problem suspected that small RNAs (sRNA) might be involved. sRNAs are short, noncoding transcripts that form structures such as stem loops and regulate gene expression by various mechanisms. These days sRNAs are sort of the spotlight under which the drunk man searches for his lost keys ("because that's where the light is"), only it turns out that many sets of keys are being found there, as well as most of the sock mates that are lost in the laundry. A class of sRNA known as piwi-interacting RNA (piRNA) was already known to help regulate ERV activity, in particular during the epigenetic reprogramming of germline cells, so why not a role for sRNAs in stem cells, as well. 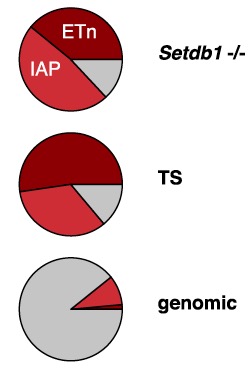 So, where do these sRNAs come from? They can be derived from many places in the genome. When the researchers examined stem cells from pre-implantation embryos of mice, they found an abundance of sRNAs derived from host transfer RNAs (tRNAs). Remember that tRNAs are folded into distinctive cloverleaf structures (Figure 1) necessary for their task of retrieving a specific amino acid that matches a triplet of nucleotides, or codon, during translation. sRNAs that match fragments of tRNAs are known as tRNA-derived fragments, or "tRFs", and appear to have roles in many processes including stress responses, viral infection response, cancer, and cell-cell signaling. Some tRFs correspond to the 5' half, and others to the 3' half, and still others to shorter regions at the 3' end of the molecule, suggesting tRNAs as the cell's answer to a Swiss Army knife. The mouse stem cells they looked at were full of tRFs that match the last 18 nucleotides (nt), including the CCA motif that the cell adds to the mature tRNA molecule as the finishing touch (Figure 1). Also abundant were 22-nt tRFs. 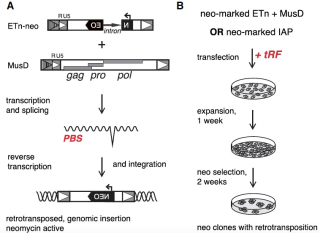 Figure 3. (click to enlarge) Nifty retrotransposition assay (see text). "R U5" is a component of the long terminal repeats (LTRs) of ERVs, which include the promoter region. gag, pro, and pol are retroviral genes. NEO (backwards) refers to the neomycin resistance gene in reverse orientation. PBS, primer binding site. Source

What connection might these 3' tRFs have to ERVs? As it happens, the Swiss Army knife has yet another use: priming reverse transcription. The RNA transcript of a retrovirus includes a sequence known as the primer binding site (PBS) that is complementary to the final 18 nucleotides of the 3' end of a specific tRNA. When a matching tRNA binds to the PBS of an ERV transcript, the reverse transcriptase enzyme has a substrate onto which it can add a nucleotide. From such humble beginnings issues a cDNA copy of the ERV genome. Different families of retroviruses use different tRNAs for this purpose, serving as the basis for how ERV families are named. For example, members of the HERV-K family in humans have a PBS complementary to the tRNA for lysine (K). Even though the PBS is complementary to only a short 3' stretch of the tRNA (the "T arm", Figure 1), the reverse transcriptase needs the full intact molecule in order to do its job efficiently. If you're thinking ahead, dear Watson, you may be imagining that the short 3' tRFs may act to block the PBS from binding a full tRNA molecule that is needed for reverse transcription, thereby suppressing ERV transcription, by Jove! 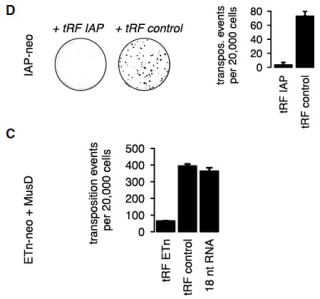 Figure 4. (click to enlarge) (D) IAP retrotransposition is strongly inhibited by tRFs targeting IAP but not by an unrelated 30 CCA tRF sequence. (C) MusD/ETn retrotransposition is inhibited by tRFs against ETn while unaffected by an unrelated 30 CCA tRF sequence or non-targeting RNA. Colony counts are the mean of two replicates ± SD. Source

Adding fuel to this hypothesis is the finding that 3' tRFs matching the two most active ERVs in mouse cells were overrepresented when compared with the numbers of these ERVs in the mouse genome (Figure 2). The two ERVs are known as IAP (intra-cisternal A-particle) and MusD/ETn, and have expanded to multiple copies, spreading throughout the genome. ETn lacks its own reverse transcriptase gene and mooches off of MusD for copying and pasting. To test whether the tRFs can inhibit the activity of ERVs, the researchers turned to a clever in vitro assay (Figure 3). Now, get the angle on this (conspiratorial tone, with NYC mobster accent): we transfect cells with a plasmid carrying an ERV sequence, but the sequence contains an antibiotic resistance gene interrupted by an intron and inserted in reverse orientation. That way, in order for the resistance gene to be expressed, the intron has to be spliced from the RNA transcript, and the sequence must be reverse transcribed (copied) and inserted (pasted) into the genome at a new location. We spike the media with antibiotic (in this case, neomycin) and the cells will die unless they express the resistance gene. And they express the resistance gene only if retrotransposition has occurred. 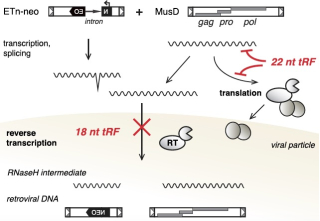 The researchers transfected human cells (extra credit if you can guess why mouse cells were not used) with the ERV plasmids, then counted retrotransposition events, indicated by cells that could grow in the presence of neomycin. Then they repeated the experiment, but this time included plasmids expressing the 3' tRFs matching the PBS, to see if there were any effect on retrotransposition (Figure 4). Sure enough, the tRFs greatly reduced ERV activity. When they sorted through the various products of the reaction, they found that inhibition had occurred at the initiation of reverse transcription — consistent with the PBS blocking hypothesis. Interestingly, the 22-nt tRFs inhibited their target ERVs using an altogether different mechanism: downregulating levels of ERV gene expression (Figure 5).

The abundance of tRFs in mouse embryonic stem cells and their ability to strongly inhibit ERV activity suggest an expanded role for sRNAs in keeping ERVs in check during the vulnerable reprogramming phase. The fact that 18-nt tRFs target reverse transcription rather than gene expression gives them the capacity to silence ERVs that, like ETn, have lost coding capacity but can retrotranspose with the aid of a coding-competent ERVs. This ability is important, since the majority of ERVs are moochers. Vertebrate genomes carry very heavy loads of ERVs and other tranposable elements, which only occasionally bring something useful to the host, like syncytins – ERV genes important in the formation of the mammalian placenta. Considering the widespread presence of tRFs across multiple species of mammals, chopping up tRNAs to impede retrotransposition may represent an ancient mechanism of keeping the peace with these perpetual squatters.

Jamie is on the faculty at Boston College, and an Associate Blogger for STC.