A Whiff of Taxonomy –
The Life and Times of Deinococcus, "Conan the Bacterium" 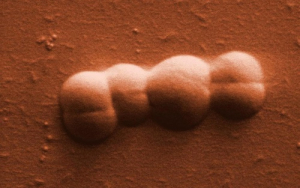 Microbes exist in practically every environment on Earth. Some of them can endure extreme cold, heat, salinity, or pH conditions. There are some conditions, though, that seem impossible to withstand. Ionizing radiation is an example. I don’t mean your run-of-the-mill background cosmic rays, but intense, radiation so strong that it shatters DNA. But that seems to be where the bacterium Deinococcus radiodurans thrives.

Surprisingly, the first mention of what is now known as D. radiodurans was in the journal Food Technology. Anderson and colleagues [1] attempted to use gamma radiation to sterilize canned food. This was an exciting prospect due to the novelty of radiation in industrial processes. But the treated food still spoiled. In studying the food spoilage, the group isolated one bacterial strain which they called Micrococcus radiodurans. Subsequent experiments showed that this organism could withstand intense UV irradiation [2] and that irradiated DNA was repaired effectively [3]. Brooks and colleagues [4] found that the radiation-resistant strains also grouped together in terms of cell wall structural profile, growth capacity under certain conditions and fatty acid content. Accordingly, Brooks and Murray [5] assigned these organisms to a new phylum they called Deinococcus. In 1986, Hensel and colleagues related members of the thermophilic genus Thermus [6] to Deinococcus on the basis of similar 16S rRNA and a shared peptidoglycan structure [7].

It is worth noting how much radiation D. radiodurans can withstand in order to fully appreciate its macho power. Consider that 5 Grays (a measure of ionizing radiation) is potentially lethal to humans. Exposure to 4,000 Grays will harm tardigrades, which are commonly considered to be radiation-resistant. D. radiodurans withstands 5,000 Grays [8] and 37% survives after receiving 15,000 Grays [9]. How is this possible? There are multiple lines of evidence for members of the family Deinococcaceae possessing unique DNA repair features, although how they work has not been fully elucidated. In 1994, Daly and colleagues showed that the repair mechanism is dependent on recA, a gene involved in recombination [10]. A naturally radiosensitive D. radiodurans strain (dubbed rec30 [11]) and a strain produced by the authors with a recA mutation lost roughly 70-fold resistance to radiation. Introducing the wild-type recA led to recovery of radiation resistance [12].

Daly and Minton [13], however, observed that the damaged cells began to grow immediately after irradiation and before recA could be activated, leading them to postulate that a single-strand annealing process occurs before recA expression. The 1999 sequence of the D. radiodurans genome showed that this organism has very high functional redundancy in DNA repair genes, many of which have functional homologs in other organisms [15]. All of these findings paint a picture of an intricate pathway involving multiple proteins activated at multiple stages of irradiation repair, which would make for quite an elegant system. However, the story is not over.

Levin-Zaidman and colleagues [9] investigated the spatial orientation of this highly unusual bacterial genome and saw that it is densely packed into what they refer to as a laterally ordered toroids. They posit that it is this orientation that provides defense from these massive exposures of radiation. The idea is that radiation breaks these DNA bonds, but the tight packing of these toroids prevents the ends from diffusing away from one another and thus allowing the repair mechanisms to operate more efficiently. An excellent synthesis of current understanding in D. radiodurans DNA repair, including the weighted contributions of multiple enzymes, was laid out by Slade and colleagues [16].

Now that we know a bit about how D. radiodurans was discovered and some of the complex biology it has evolved, how are humans using it? For evolutionary studies, this organism is a reference tool for studying the taxonomy of extremophiles. For example, it is now knows that D. radiodurans is a reasonably close relative of members of the genus Thermus [7]. In addition, the toroid DNA structures had led to increased understanding of the constraints on germination of bacterial spores, dormant cell forms that persist for extended periods in the environment [18]. Recently, a group has even used information about D. radiodurans DNA repair proteins to develop an E. coli strain that is 4-fold more resistant to radiation than the wild-type [19]. 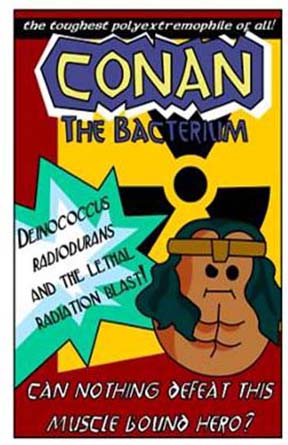 Perhaps the most exciting use of D. radiodurans, however, comes in bioremediation. Cleaning sites containing radioactive waste is incredibly dangerous not only due to the radiation, but also due to the toxic metals that are often involved in radioactive processes. Researchers have engineered strains of D. radiodurans capable of digesting organopollutants [20], and resisting the toxic effects of heavy metals [21] to provide an effective strategy for cleaning some of these sites.

Together, all of this has earned Deinococcus radiodurans the affectionate nickname “Conan the Bacterium.” It is highly resistant to multiple sources of radiation, cultivable in the lab environment and can be engineered for multiple significant purposes. I find this to be a fascinating story in the power of microbiology to not only show us something new about the world, but also to help make the world a better place. I hope you can agree that the story of D. radiodurans is worth keeping an eye on. 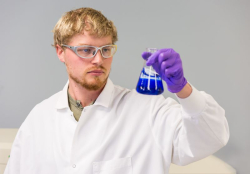 Alex Neu is with the Roy Lab, Section of Ecology, Behavior and Evolution at University of California, San Diego