« Microbial Physiology and Diversity: What Was Old is New Again | Main | TWiM 160: On the road to virus »

In the Beginning… there were Stromatolites

Creation stories are inherently imaginative and interesting. The three main monotheistic religions —     Judaism, Christianity, and Islam — believe the universe took only six days to create, Greek mythology posits that Gaea (Earth) and Uranus (Sky) created many progenies whose fighting shaped the world. And this is my personal favorite: Nordic mythology proposed that Odin hacked-up a great giant into many pieces, which became the universe, skies, and the Earth. Nowadays we believe that all living things developed in much longer than six days and definitely not from the forges of Prometheus and his brother Epimetheus. Instead, we theorize living things develop via evolution. Yet, as scientists, we still marvel at the origin of life and continue to hunt for the first traces of life on our Pale Blue Dot. 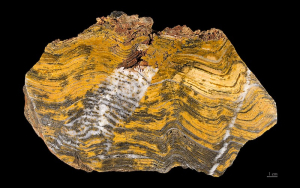 So, where can we find the first life forms on Earth? Although we do not yet know the exact microbes that managed to spin together some genetic information and make proteins, we do have evidence of life as far back at 3.5 billion years ago (that’s billion with a “b”!) in what are known as stromatolites (the term comes from the Greek ‘stroma, for layer, and ‘lythos’, for rock). Stromatolites are organic sedimentary structures consisting of calcified microbial biofilms or mats and sedimentary layers. Over the years, the definition of stromatolites has changed with new discoveries, but at the present, stromatolites appear to be defined as layers of bacterial biofilms. Stromatolites fall under the blanket term of microbialites, which include structures that are made from layers of eukaryotic and prokaryotic communities. Stromatolites are seen all over the fossil record, including in hydrothermal vents at Yellowstone National Park, frozen lakes in Antarctica, land locked atolls in the Indian Ocean, hypersaline lakes in Western Australia, subtidal zones in the Bahamas, and hundreds of other locations.

Stromatolites form in a variety of ways, but mostly consist of bacteria, especially cyanobacteria, which created a thick slimy biofilm which attaches to the local sediment. When bound to the extracellular polymeric substances of the biofilm, the sediment calcifies in one of two ways. One is that calcium carbonate from the surrounding water cements the sediment after the microbes begin to grow on it. The other is that the organisms themselves secrete a carbonate that cements both live and dead cells. Over time, these layers accumulate on top of one another until the stromatolites can reach over 2 meters in height!

An extraordinary study by Biddana and co-workers demonstrates how stromatolites form in real time. The team created time-lapse videos of Oscillatoria cyanobacteria from underwater sinkholes in Lake Huron responding to different light, temperature, and debris. The cyanobacteria migrated towards the light, grew better in warmer temperatures, and, surprisingly, buried the debris that fell on the biofilm. In each case, the Oscillatoria spread their filaments and tendrils towards desirable conditions, such as towards light sources or up and over debris. I was particularly drawn to the burial part of the study because the cyanobacteria covered the shells and rocks completely in a single, solid layer in as little as one day! This could explain why, in fossilized microbial mats, the organic layers are always seen in a clear, solid stratum, and not in layers of varying thicknesses — but more on that later. This study was also important to me because the environment where the cyanobacteria came from, the underwater sinkholes in Lake Huron, potentially mimics ancient Earth. The groundwater in the sinkhole pumps water low in oxygen and high in sulfides, much like in the old Earth. 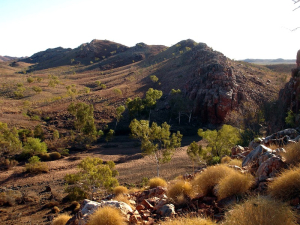 Comparing modern stromatolites to fossil ones provides a small window into our very ancient past. An example is a recent find by Allwood and colleagues at the Strelley Pool Formation in Western Australia, where there is evidence of 3.5 billion year old stromatolite fossils. The researchers had to prove that traces of life endured literally billions of years of pressure, heat, and erosion, and that these were not just not layered rocks like sandstone. A team led by a group at Caltech and the NASA Astrobiology Institute at Jet Propulsion Laboratories looked at one millimeter light and dark alternating striations in the ancient Australian stromatolites. The researchers argue that these dark lines are 3.5 billion-year-old remains of an Early Archean Reef. They explain that the dark lines have a consistent width throughout the rock formation that resembles that of other ancient and modern stromatolites. Additionally, the team used Raman spectroscopy to detect inelastic scattering of monochrome light via a laser to detect the structural composition of molecules. This prove that the molecules in the black lines are organic in origin. Additionally, Raman spectroscopy revealed that the black organic lines were subject to the same heat and pressure as the surrounding rock therefore confirming the organic matter could not have come from other sources.

The picture of life on Earth billions of years ago is now a little clearer. Cyanobacteria lived and worked together in microbial mats in the seas around Earth, happily turning sunshine and carbon into energy. But what other insights could the fossilized stromatolites give us? For starters, their existence is an example to how life on other planets may look or evolved. Life this ancient in Earth’s history also means their environment was oxygen poor and therefore expands our perceptions of what is or is not a hospitable planet. Additionally, the fossilized remains of stromatolites could prove more immediately the existence of life on our nearest neighbor, Mars. If we were to find rock formations with dark and light repeating layers like those in Australia, we may be able to prove the existence of stromatolites and therefore signs of ancient microbial life on the Red Planet.

Many questions remain. For example, did cyanobacteria make the oldest stromatolites? This is still hotly debated. Also debated it whether or not the origins of the most ancient stromatolites are biotic. However, it is becoming clearer that when we venture to new planets we probably won’t encounter little green men, but we will more likely run into beautiful microbes hard at work. 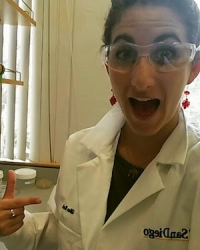 Gillian Belk is a graduate student in Rachel Dutton's lab at UCSD.