Sex is kindled by many factors, not all anticipated. Here is an unexpected one: bacteria make an aphrodisiac. But hold on, we know that bacteria engage in untold inter­actions with eukaryotes whose environment they share, so this should not be surprising. Fact is, the default mode of mi­crobial existence is social, so why not sex?

Before we get into sex, consider reading an amazing dis­cussion of the width and depth of bacteria networking with 'higher' animals by McFall-Ngai and colleagues. Note that in the bacterial world, solitary existence is largely limited to Petri dishes in the lab and infections. To illus­trate the surfeit of paradigms in this shared existence, I arbitrarily choose a few that were previously discussed here, the bobtail squid and Vibrio fischeri, the Wolbachi­as – those nearly universal insect sex ratio changers – and Pseudo­al­teromonas a bacterium that stimulates differentiation in marine tubeworms. Yet, for all this variety of social skills, inducing sex in a eukaryotic organism is not a skill typically attributed to bacteria.

So, it came as a surprise to people in the labs of Nicoll King and Jon Clardy (the summary of the pa­per starts with: "We serendipitously discovered…") that an otherwise ordinary marine bacterium, Vibrio fischeri, induces a strong sexual behavior in a simple organism, a choanoflagellate called Salpingoeca rosetta. Since I'm guessing that that you don't know much about choanoflagellates, here is what Wikipedia tells us: "Choanoflagellates are a group of free-living unicellular and co­lo­ni­al flagellate eukaryotes considered to be the closest living relatives of the animals. Choanofla­gel­la­tes are collared flagellates having a funnel shaped collar of interconnected microvilli at the base of a flagellum." They subsist from eating bacteria, thus enjoy a close relationship with them. Choanos have served as a popular model for studying the evolution of multicellularity.

These choanoflagellates look something like mammalian sperm cells, having an ovoid body and a long, although rather stiff flagellum. They usually reproduce asexually, although they can be per­suaded, somewhat reluctantly, to mate by placing them under starvation conditions. But these researchers found that the presence of V. fischeri induces a frenzied mating behavior leading to abundant coupling. This was entirely unexpected because, so far at least, bacteria had not been known to directly influence sexual behavior in eukaryotes. The change in these cells' comportment results, within 30 minutes, in swarms of a few dozen cells that soon fuse with each other. In keeping with typical sexual reproduction, this results in cell fusion, karyogamy, meiosis, and re­combination, the usual steps in sexual reproduction. This behavior could be turned into an assay that served to guide fractionation of the V. fischeri growth medium. A positive swarming reaction was induced by as few as 4 x 102 V. fischeri cells, which is comparable to their concentration in the ocean. The various steps in these processes were studied with particular care, in keeping with the interest of these investigators in further developing the study of the choanoflagellates. The work described in this paper is dealt particularly well in this commentary. 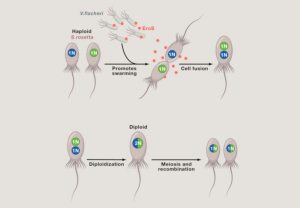 (Click to enlarge ) Figure 2. Transkingdom Inter­actions Stimulate a Eukaryotic Sexual Cycle The bacterium V. fischeri secretes an aphrodisiac, EroS, which stimulates swarming and sexual reproduction of the choanoflagellate eukaryotic microbe S. rosetta. Nuclei in the haploid phase (denoted as 1N) prior to mating are colored solid blue and green. The two haploid cells fuse, resulting in a diploid cell (denoted as 2N) after nuclear fusion. Meiosis and recombination then produces haploid progeny carrying a genetic mixture of the parental haploids (denoted as blue and green). (We thank Shelby Priest for her efforts in generating this illustration). Source

The active product that emerged from the fractionation studies of culture supernatants of V. fischeri turned out to be a secreted protein of about 90 kDa. The authors appropriately named it EroS for ‘extracellular regulator of sex.’ Alone, EroS is sufficient to elicit the aphrodisiac ef­fect. Accordingly, they observed the same effects when using heterologously expressed EroS in E. coli or purified EroS protein.

What does EroS do?

It turns out that EroS is an enzyme that hydrolyzes chondroitin sulfate, the glycan polymer made up of glucosamine and glucuronic acid that is found on cell surfaces and extracellular matrices of animal tissues and is involved in cell proliferation and differentiation. EroS is a pretty typical chondriotinase and resembles that in many other organisms. Here as elsewhere, chondroitin sulfate is covalently linked to proteins. 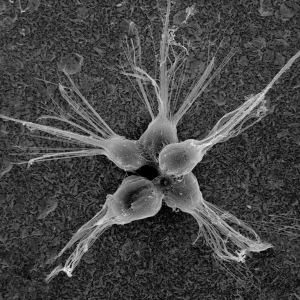 Does this matter in nature? Possibly. S. rosetta inhabits the same coastal marine habitats as V. fischeri, so they may encounter each other frequently. How does EroS work? Does it soften the choanoflagellate envelope to facilitate cell fusion? This story casually reminds us of sperm cells, which carry several hydrolytic enzymes in their head that are used to dissolve the tough envelope of the egg.

Do the cleavage products of EroS act as signaling mo­le­cules? Not known as yet. But what's in it for the bacteria? Do the sugars arising from its hydrolysis act as their food? Peut-être, non? Or, when engaged in sex, does S. rosetta lose interest in ingesting these bacteria? But further, how do the choano cells become so ready to mate? How come the mating switch occurs so rapidly? These and many other questions await answers.

Is this a widespread phenomenon?

The researchers note that the presence of the bacteria may generally signal that the conditions are ripe for mating. One would expect that other kinds of bacteria and other mating-oriented organisms may interact in such manner and indeed, the researchers show that certain other vibrios (but not others) also have analogous activity. Given the importance of sex in nature, such interactions may indeed be more frequent. It may well turn out that this system will facilitate the study of similar phenomena in other life forms and that bacteria indeed facilitate social inter­actions in greater and greater numbers.

This paper was discussed in the September 14 episode of This Week in Microbiology. Press play to listen now.