My Home is My Microbial Castle

It should come as no surprise to STC readers that most of us spend the vast majority of our time living indoors. Yet, when it comes to environmental microbiology research, relatively little empha­sis has been placed in studying the microbial ecology of the indoor spaces that we occupy for such a large fraction of our lives. That has been changing in recent years. Testament of this fact was the 2017 Symposium on the Microbiology of the Built Environment (MoBE) which took place in Wash­ing­ton DC a few weeks ago and which I had the opportunity to attend. My participation in the MoBE Symposium was not because I direct research related to the subject matter in my lab. Rather, I was there because I had served in the advisory committee that helped Paula Olsiewski, from the Sloan Foundation, direct a MoBE program; for about ten years the Sloan Foundation's MoBE program has been funding interdisciplinary projects to explore diverse aspects of the microbiota found in built environments. As Sloan's MoBE program came to its expected conclusion, it was very satisfy­ing to see such a vibrant community of investigators broadly studying diverse aspects of MoBE using interdisciplinary approaches that involve microbiologists, building scientists, architects and many others. This scientific community is making great strides at speaking a common language, communicating the fruits of their efforts, and suggesting future research and practical directions for making the built environments we occupy as healthy as possible. Importantly, the community of MoBE scientists now appears headed towards a reasonably sustainable future of funding sour­ces beyond what was provided by the Sloan Foundation. Some indications of this are the facts that the Biology and the Built Environment Center at the University of Oregon (BioBE) and the Microbiology of the Built Environment Network (microBEnet) appear to be here to stay.

So, what have we learned from all these efforts at studying the MoBE? It's impossible to synthesize this field in a brief post such as this since so much knowledge has been gained, even in a relatively short time. Instead, if you develop an interest for the MoBE, I recommend you read the report just released by the National Academies of Sciences, Engineering, and Medicine that examines the for­mation and function of built environment microbiomes and their impacts on human health. But if I had to point at some of the most important take-home lessons of studying the MoBE, I would say that the finding that the microbiota of the built environments are in great part dominated by the microbes that the inhabitants bring into those places has been, for me, an eye-opener. This is the new concept that we all travel around with a "microbial cloud" part of which is deposited wherever we spend time. Moreover, when ventilation is limited, when the air is recirculated (that is, when the windows are not open) that seeding effect by the occupants is even more pronounced. That may be somewhat self-evident but it seems that as modern humans we may not be paying at­ten­tion to this fact as much as we should. By building and keeping our living environments cleaner and more insulated we are increasing their colonization with our microbial cloud and as a con­se­quence diminishing our exposure to microbial diversity present in more open environments. This appears to have important health consequences, bringing up the old "hygiene hypothesis," which suggested that living in environments that were too clean – along with the overuse of antibiotics – led to poor development of immune systems and thus an increase is autoimmune disorders. This notion may be at least partly correct. Certainly compelling cases have been made in book-length presentations on the subject matter such as Martin Blaser's "Missing Microbes" and Moises Velas­quez-Manoff's "An Epidemic of Absence." The research coming out of the MoBE field is providing further support for these ideas. 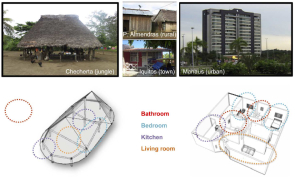 While it may be difficult to succinctly synthesize the ac­complishments of the MoBE research of the last decade, two papers that appeared last year and were repeatedly mentioned at the 2017 meeting struck me as particularly thought-provoking. This first paper presents a study of the microbiomes present inside homes spanning a range of modernization within the Amazon River basin. The authors investigated the architectural design and the mi­crobial communities of homes along an urbanization gradient. The homes under study were in Chechertas, a traditional hunter-gatherer village near the border of Pe­ru and Ecuador, in Puerto Almendras, a rural village in Peru, in the large town of Iquitos, Peru and, finally, in the modern Brazilian city of Manaus. While there are few differences in the average ambient temperature and humidity along this gradient and the overall air exchange rates were high for all homes studied, there were dramatic differences in the design of the homes. As urbanization increases there is more separation of the indoor and the outdoor environments and an increased separation of the internal spaces (Fig.1). Not surprisingly, the mi­cro­bial communities were significantly different across these four types of homes (Fig. 2). Analyses of the main location of the differences allowed the authors to conclude that as the internal spaces became separated by walls, it was the microbial communities residing on those walls (and not so much those on the floors) that were most predictive of the functionality of the space. And, im­por­tant­ly, the microbial taxa residing on the walls shifted from com­ing from the environment to com­ing from the inhabitants. In short, this study – while limited to a single geographic region and a small number of homes – shows that increasing modernization leads to homes that are in­crea­sing­ly populated by microbes from the inhabitants rather than the environment. The authors reach the conclusion that "urbanized spaces uniquely increase the content of human-associated microbes – which could increase transmission of potential pathogens – and decrease exposure to the environmental microbes with which humans have coevolved." This is particularly interesting in light of the results presented in the second paper. 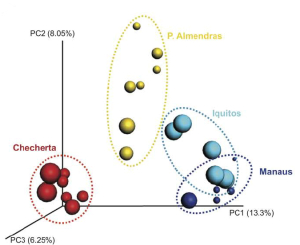 Figure 2. Microbial community structure in hous­es differs significantly across the urbanization gradient. 7 sites that were common to all hous­es (living room, bedroom, kitchen floors, living room walls, beds, chair handles, counter tops) were collapsed into one sample to obtain a to­tal measure of diversity for each home. Prin­ci­pal coordinates analysis (PCoA) of the seven collapsed samples for each home shows tight clustering of the samples by community (P < 0.01, analysis of similarities). Point size shows the a diversity level, measured as phylogenetic diversity (PD) (smallest, <150; largest, >250). (adapted from Source)

The prevalence of asthma, along with several other au­toimmune diseases, has been steadily increasing in re­cent decades with current estimates hovering around 10% for the U.S. population. Numerous studies have suggested a link between the lack of exposure to certain microbes early in life and the development of asthma symptoms in humans. Elio wrote about this connection, for the particular case of Helicobacter pylori, in a post in this blog in 2011. The results he described showed that in a mouse model for asthma, infecting neonate mice with H. pylori alleviated the asthma considerably. However, when studies were done with human populations, results that suggested that early exposures to diverse mi­crobes protected children from developing asthma, the interpretations were always confounded by the fact that there were too many variables.

This is where the second paper comes into play: a small study was done in which there were fewer variables, lead­ing to a stronger conclusion. The authors took advantage of two human populations in the United States that share many common features but differ markedly in their early life exposure to farm dust. The two populations studied were Amish farmers from Indiana and Hutterite farmers from South Dakota. The two populations originated in Europe during the Protestant Reformation and migrated to the U.S. in the 18th and 19th centuries. Since then, they have remained largely reproductively isolated. Most interesting, their lifestyles are extremely similar when it comes to factors that had previously been shown to influence the risk of developing asthma such as number of siblings, diet, duration of breast feed­ing, vaccination practices, and keeping of indoor pets. 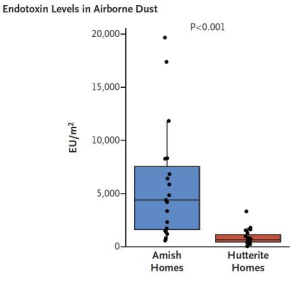 However, the two populations differ markedly in their farming practices and the extent to which children are active in the farm. The Amish are traditional farmers, have single-family dairy farms and use farm animals for transportation and work. In contrast, the Hutterites have large mechanized farms and children tend to not come in contact with the farm animals. Strikingly, the prevalence of asthma in schoolchildren is 5.2% for the Amish and 21.3% for the Hutterites. While both groups keep clean households, the analysis of airborne house dust revealed a much greater amount of bacterial lipopolysaccharide (endotoxin) in the Amish homes versus the Hutterite homes (Fig. 3). And when the two dusts were used in the mouse asthma model system, the Amish house dust proved protective while the Hutterites house dust did not.

In short, as modernization has led us to the build homes that markedly separate the indoor and outdoor en­vi­ron­ments and we have reduced our early life exposure to the diverse and abundant microbes with which we had co-evolved all along, we have generated built environments that lack key components for the development of our immune systems. So, is there a direction to take? Yes. Succintly, I will quote the title of Finlay and Arrieta's book on the subject: Let Them Eat Dirt.