The Human Circadian Rhythm is a Microbial Business 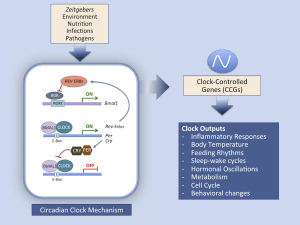 Figure 1. A primer into circadian rhythms. The Molecular Clock Modulates a Variety of Physiological Processes Including Immune Responses. The core-clock transcriptional-translational feedback loop composed of the transcriptional activators CLOCK and BMAL1 as well as the repressor proteins Cryptochrome (CRY) and Period (PER) drives the daily rhythmic gene expression of clock-controlled genes (CCGs). Environmental cues such as the alternation of light and darkness, type of nutrients and time of food intake, or exposure to pathogens may impact the clock molecular machinery and thereby influence its function. The circadian clock governs diurnal oscillation in gene expression and impinges on whole organismal homeostasis and fundamental physiological processes, including immune system functions and inflammatory responses. Source.

Nice of the Nobel Committee to award the 2017 prize for Medicine for work on the circadian rhythm of fruit flies. This gives us an entry into a paper that helps explain how this cycle actually works. It won't surprise readers of this blog that the answer is microbial and concerns, not unexpectedly, the intestinal microbiota. There already is a rather interesting literature on this emerging subject linking microbes and the body's circadian rhythm (see here and here for recent review articles).  As an aside, the first post on this blog dated 11 years ago was about the circadian rhythm of cyanobacteria.

As is widely known, the intestinal microbiota plays an important role in the metabolism of animals, greatly affecting states of health and disease. For example, the path towards obesity is boosted by the presence of the microbes of the gut, probably because they help digest residual, otherwise undigested food, thus providing more energy to the host. In addition, such interactions are under the influence of the clock that regulates the body's circadian rhythm. Thus, this rhythm has a marked influence on the intestinal microbiota, for instance, by altering the cyclical distribution of bacterial species. Not only that, the biogeographic location of the microbiota (e.g., lumen vs. mucus layer) is under circadian influence as well, exposing the intestinal tissues to different bacterial kinds over the course of the day. Such oscillations result in physiological changes, for instance, in the expression of genes involved in energy metabolism or DNA repair. Moreover, the intestine appears to anticipate the emergence of pathogenic microbes by mounting a circadian clock-orchestrated inflammatory response. In this vein, Susan Golden discussed here previously how circadian rhythms influence the infectivity of Salmonella in mice. In turn, the gut microbes send signals to a molecular clock in the intestine (see here for a recent review) that alter the physiology of host (Figure 1). Examples of the resulting oscillations are seen in the fluctuating levels of serotonin and many other physiologically active compounds.

This is indeed a bi-directional conversation. What goes on here? A paper from L. Hooper's and M. Kubo's labs brings together three relevant yet distinctive-sounding subjects, to wit, the animal's intrinsic circadian rhythm, the activities of the gut bacteria, and animal fat metabolism. How are these connections made? The authors of this paper focused on a transcription factor called NFIL3 that is involved in establishing the circadian rhythm by its diurnal oscillations in intestinal epithelial cells. They noticed that NFIL3 is made in significantly lesser amounts in the small intestinal epithelium of germ-free or antibiotic-treated mice. If the amplitude of the oscillation is controlled by the microbes present in the gut, the microbiota is clearly under the influence of the circadian clock. How are the two coupled? Mice with a knockout in the gene for NFIL3, just like the germ-free ones, weigh less and have less body fat than their normal counterparts, their other physiological and immunological activities being otherwise unaltered. The body fat of mice that were germ-depleted by antibiotics was as low as that of the NFL3 mutants, suggesting that both bacteria and NFIL3 are required for greater fat deposition. The microbiomes of wild type and mutant mice were taxonomically similar, so that's not the reason for the difference.

Figure 2. Circadian oscillation of the gut microbiome, such as a) bacteria, b) functional pathways, and c) bacterial metabolites. Black, peaks at resting/dark phase. Blue, peaks at active/light phase. Source

Expression of the NFIL3 gene is regulated by a core circadian clock transcriptional repressor called REV-ERB alpha (Figure 5), which itself oscillates diurnally, albeit at a higher level in germ-free mice. What if the microbiota repressed the expression of REV-ERB alpha, wouldn't that elevate the level of NFIL3? That is precisely what the investigators found, thus establishing that the various players are indeed interconnected. To say it again, in the presence of the microbiota the level of body fat increases, ostensibly by the elevation in the level of NFIL3 (which itself occurs by repressing the repressor, REV-ERB alpha. 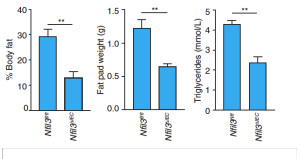 Let's now ask how do the bacteria play this game. What are the signals they provide to the intestinal cells to regulate the expression of NFIL3 and REV-ERB alpha? Bacteria are recognized by the intestinal epithelial cells via the Toll-Like Receptors (TLRs). Other members of the immune system, e.g., dendritic cells, are involved, (as shown by the effect of depletion of these cells, e. g., when diphtheria toxin is present). Involved is also the TLR signal adaptor protein MyD88, which ties together microbe-recognition and the microbiota. It gets woolier. The bacterial signals are relayed from dendritic cells to lymphoid cells called ILC3, via the cytokines interleukin-23 and interleukin-22. Why do you want to know this? Because the regulation by microbes of NFL3 expression takes place via the dendritic cell-ILC3 circuit. This stimulation is due to the lipopolysaccharide or the flagellins of gram-negative bacteria, as shown by the effect of mono-inoculating germ-free mice with Salmonella typhimurium or Escherichia coli. The non-flagellated Bacteroides thetaiotaomicron or the gram-positive Enterococcus faecalis do not do this.

(Click for the complete figure ) Figu­re 4. Lipids in sections of the small intestine (stained with Oil Red O) in wild type and mutant in the NFIL3 gene (Nfil3ΔIEC ). Note the difference in lipid content. Source

Immunologically-savvy readers are used to the smorgasbord of terms use in this field, reflecting its plethora of key constituents. The rest are encouraged to go to figure 5, which explains the story quite well. The authors further identify the pathways that regulate the expression of NFIL3 and REV-ERB alpha. Downstream is a transcription factor called STAT3 that is key in the response of a receptor called IL-22 (or IL-22R, named for one of the interleukins mentioned above). When IL-22R is activated, STAT3 becomes phosphorylated, and can now bind to the promoters of target genes, either to activate or repress them. STAT3 reduces the expression of REV-ERB alpha, which thus increasing that of NFIL3. In germ free mice, STAT3 binding is much reduced, indicating a role for the microbiota her as well. How do the bacteria participate in the diurnal rhythm of NFIL3 expression?  In brief, the rhythm is generated by REV-ERB alpha expression and is fine-tuned by the microbes via STAT3.

A transcriptomic analysis across the diurnal cycle showed that 33 proteins were differentially expressed in wild type and Nfil3 mutant mice, about half of which included elements of lipid transport and metabolism under the control of the circadian rhythm. Deleting the genes for these enzymes protected against obesity, and their lowered expression in the in mutant mice partially accounts for their mutant phenotype. 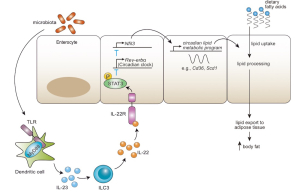 We surmise that the interactions of microbes and the intestinal epithelium immune system may help to explain why circadian clock disruptions in humans, such as due to traveler's jet lag, lead to such metabolic diseases as obesity, diabetes, and possibly others. This may or may not relate to the fundamental questions of what circadian rhythms are about (other than having to live on a planet which has a marked circadian rhythm). Regardless, the list of the ways our microbes influences our body and our mind continues to expand into ever more diverse areas. As a microbiologist would say, this may be an exponential function.