« Why Be Intracellular and Be Motile? | Main | The Human Circadian Rhythm is a Microbial Business »

"We Are What We Are" 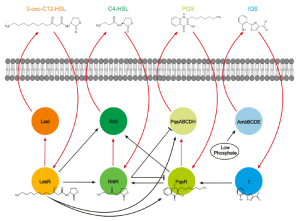 If I were a stage director and contracted for another re­vi­val of the Broadway show 'La Cage aux Folles' (including the chorus line's "We Are What We Are" ) I would not wa­ver a minute to choose for all leading roles members of the Pseudomonas family. All are true professionals (me­thod acting, Meisner technique ), versatile in acting solo, or as a team, in dancing and in singing. Singing? In fact they're multilingual and outright loquacious: they employ, often simultaneously, several Quorum Sensing systems (QS) (Fig. 1). Some of them are the perfect choice for the roles of villains, and all are well trained in self defense: they bring the necessary CRISPR tools along. But since they're professionals they don't adhere to 'open carry', which they consider a waste of energy and prone to self-harming. As Bonnie Bassler and her coworkers showed in a recent study, Pseudomonas aeruginosa mounts its de­fense, CRISPR, upon attack or, more precisely, when it re­alizes that it moves in a crowd where pickpockets (= pha­ges ) might lurk.

These researchers found in preliminary experiments that the QS inhibitor baicalein prevents production of the vi­ru­lence factor pyocyanin, whose synthesis is triggered by the LasIR and RhIL QS systems. Baicalein also blocked the positive effect of an autoinducer (AI) cocktail on cas3 expression (Cas3 = the scis­sors ) and inhibited the AI‑mediated enhancement of CRISPR adaptation in wild-type P. aeruginosa PA14 and in a ΔlasI ΔrhlI mutant supplemented with AI. 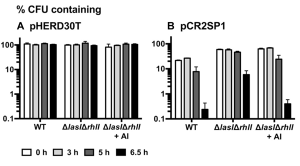 They then quantified the retention of a control plasmid and a CRISPR-targeted plasmid – that is, a plasmid which contains a protospacer "known" by the chromosomal CRISPR array and flanked by a protospacer-adjacent mo­tif (PAM) that is required for CRISPR interference – over time in wild-type PA14 and in a ΔlasI ΔrhlI double auto­in­ducer-synthase mutant (Fig. 2). No loss of the control plasmid occurred over the course of the experiment in either strain. With respect to the CRISPR-targeted plas­mid, no loss occurred in either strain during growth at low cell densities, and addition of an autoinducer cocktail (AI) had no effect for up to 3 h. After 5 h of growth, con­di­tions under which QS has initiated, plasmid loss occurred in WT cells. In contrast, at 5 h, minimal loss occurred in the ΔlasI ΔrhlI double mutant but addition of AI restored plasmid loss to WT levels. At 6.5 h, when QS is highly in­duced, modest plasmid loss occurred in the ΔlasI ΔrhlI mutant, whereas over 20-fold more of the ΔlasI ΔrhlI mutant cells retained the plasmid than did wild-type cells or ΔlasI ΔrhlI mutant cells sup­ple­men­ted with AI. This result shows that QS is required to potently induce CRISPR-Cas activity in PA14. The residual CRISPR-Cas activity in the ΔlasI ΔrhlI mutant suggests that another, less efficient LasI RhlI-independent CRISPR-Cas activation mechanism(s) exists in PA14. 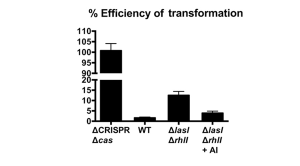 The above experiments indicated that QS enhances plas­mid loss during cell growth, that is, when the plasmid has already generated copies of itself. Høyland-Kroghsbo et al. went on examining the influence of QS on the ability of CRISPR-Cas to eliminate a single  incoming genetic ele­ment, a single phage for example. To this end, they mea­sured the efficiency of transformation (EOT) of cells grown to high population densities by the CRISPR-targeted plas­mid (calibrated to that of the control plasmid ) in the wild-type strain PA14, in a mutant strain lacking both CRISPR arrays as well as the cas and csy genes, and in the ΔlasI ΔrhlI strain with and without the addition of autoinducer cocktail (note that their CRISPR-targeted plasmid mim­icked a situation where the cells had already encoun­ter­ed an infecting phage before and were 'primed' for de­fense ).

As expected, the EOT was 100% for the ΔCRISPR Δcas mutant because this mutant is incapable of targeting either plasmid (Fig. 3). In contrast, the EOT was 2% in wild-type PA14 because CRISPR-Cas is fully induced and efficiently cleaves the targeted plasmid. The EOT was 14% in the ΔlasI ΔrhlI double mutant, showing that the CRISPR-Cas immune system is seven-fold less effective than in the wild type when uninduced. Addition of autoinducers to the ΔlasI ΔrhlI double mutant restored CRISPR-Cas activity, reducing the EOT to 4%. Thus, QS regulation of CRISPR-Cas activity in PA14 is the major trigger for high-level CRISPR-Cas-dependent immunity against infecting elements. 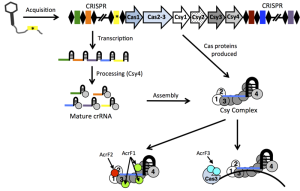 (Click to enlarge ) Figure 4. Model of the mecha­nisms of action of three anti-CRISPR proteins. The type I-F CRISPR loci consist of direct repeat sequences (black diamonds) separated by uni­que spacer sequences (colored rectangles) that were derived from foreign mobile genetic ele­ments. During the acquisition stage, a piece of DNA from an invading phage or other mobile element is captured and inserted as a spacer in­to a CRISPR array (yellow rectangle). Next, the CRISPR-associated (Cas) proteins are produced, and the CRISPR loci are transcribed into long pre-CRISPR-RNAs. The Csy4 endonuclease then cleaves the repeat sequences to yield mature CRISPR-RNAs (crRNAs), each containing a single spacer sequence (colored lines). The crRNA-Csy4 complex then interacts with Csy1,Csy2, and Csy3 to form the surveillance complex. AcrF1 and AcrF2 directly interact with this complex and prevent DNA binding. By contrast, AcrF3 binds to the Cas3 helicase-nuclease protein and blocks its recruitment. Source

Høyland‑Kroghsbo et al. argue that their "...discovery of QS-mediated activation of CRISPR-Cas aligns well with previous studies showing QS-mediated phage defense via down-regulation of phage receptors reducing infect­ion rates (see here in STC). QS repression of phage sur­face receptors at high cell density could be the first line of defense, effectively enabling bacteria to prevent in­fection. If this initial strategy fails, the second line of de­fense becomes crucial: QS activation of CRISPR-Cas im­mune defense enables pursuit of phages that make it into the cytoplasm." It thus makes sense to develop, for example, phage therapies combined with autoinducer antagonists for cystic fibrosis (CF) patients with chronic, antibiotic-resistant Pseudomonas aeruginosa infections (see Marvin Friedman's STC post on phage therapy here ). Supporting this perspective, D'Argenio et al. found a pre­valence of lasR, and less frequently rhlR, mutants among P. aeruginosa isolates from CF patients during infection for reasons that are not completely understood. Although such mutants would be unaffected by QS‑inhibiting the­rapies targeting LasR activity, they would already be im­paired in activating the CRISPR-Cas immune defense and maybe, in addition, unable to down-regulate phage re­cep­tors. The autoinducer antagonist in the phage cocktail for therapy would, in addition, reduce the expression of such virulence factors that depend on activation via one of the QS systems. And there is one last point: it is known by now that many phages encode anti-CRISPR proteins (Fig. 4). This makes the choice of the most effi­cient phage cocktail less of an issue.

Christoph Weigel is lecturer at Technical University Berlin, and at HTW, Berlin's University for Applied Sciences. He's an Asso­ci­a­te Blogger for STC.