Why Be Intracellular and Be Motile? 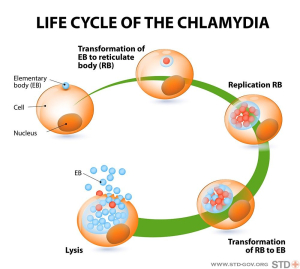 Why would a strict intracellular organism be motile? In the case of rickettsiae (and some not strict intracellular parasites such as the listeriae and shigellae), motility is carried out through the activity of the host's actin, appa­rently for the purpose of infecting adjacent cells. I am not talking about that, but rather I will consider here the in­trinsic motility of those exemplars of intracellularity, the chlamydiae and the rickettsiae. Why would they sprout flagella and move around, possibly extracellularly? But before I will deal with this puzzle, I want to introduce as­pects of the chlamydiae, a group of organisms that I find particularly attention-grabbing.

Everybody, especially college students, know about the chlamydiae for their ability to cause the most common sexually-transmitted disease in the US and elsewhere. But there is much more to this group of organisms, something that is not always known to many microbiologists either. It turns out that chlamydiae are nearly ubiquitous, being found within a large variety of animals and plants. Included are vertebrates, such as people or the leafy sea-dragon and the barramundi, in­vertebrates like the sweet potato whitefly, and many protists. Free-living amoebas are frequent hosts for chlamydiae and their ilk, which are the best studied of the environmental chlamydiae. In addition, chlamydial rRNA sequences have been found in a remarkable variety of habitats, such as soils, sediments, hydrothermal vents, sludge, plus, plus. In other words, they seem to be every­where. They are surely underappreciated, despite some of environmental strains apparently being able to infect humans. (Proving Koch's postulate here as elsewhere is not always easy). One spe­ci­es, Chlamydophila pneumoniae, is said not only to cause pneumonia but also to be associated – in ways as yet uncertain – with atherosclerosis, asthma, and Alzheimer's disease no less.

Chlamydiae undergo a rather complex life cycle that comprises a tough, environmentally resistant stage called 'Elementary Body' and a reproductive one, known as 'Reticulate Body.' The mor­pho­lo­gy of these developmental stages varies considerably with the species, from rod- to crescent- to star-shaped. Inside host cells, these forms tend to live in clumps known as 'Inclusion Bodies,' which are readily visible in pathological specimens. What else? Chlamydiae tend to have small ge­nomes, about 1 Mb in size, and to lack the genes for amino acid biosynthesis and for making some nucleotides. They have ADP/ATP translocases that allow them to import these energy rich com­pounds. Phylogenetics suggest that they have been strict intracellular parasites since their early days. 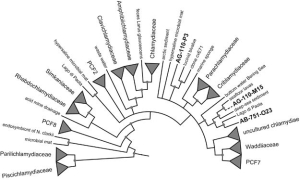 Recent work on this group of organisms has revealed a whole lot of interesting things about them but perhaps the main one is that they have played a key role in the origin of plants. This curious inference arises from chlamydial proteins being remarkably like those of cyanobacteria and plants and, even more surprising, being able to funct­ion in plastids. In one species, over 150 proteins have high sequence similarity to those of cyanobacteria and plants. In addition, some of the chlamydiae have a 23S rRNA intron, which are char­ac­te­ris­tic of algal plastids, archaea, and lower eukaryotes, but absent from most bacteria. So, what happened here? Hypotheses abound, but perhaps the most credible one at present is that chlamydia participated in a tripartite affair, along with the ur-eukaryote and the bacteria that became mitochondria and plastids. The work of Hueng and Gogarten supports this possibility. They found that 21 genes were transferred between chlamydiae, a red alga and plants. They and others (see for example here and here) pro­posed that the chlamydiae worked to help the future plastid (a cyanobacterium) become es­tab­lish­ed in the plant. This has been called the MAT (for Ménage á Trois) hypothesis, although the way it worked has not been fully worked out. Not surprisingly, this daring notion has been force­fully contested. 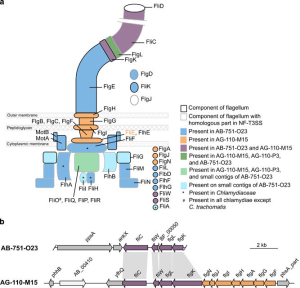 Now for the gist of this post. A recent paper presents da­ta for some marine chlamydiae possessing genes for a complete flagellar apparatus, just like that of free-living bacteria. How was this revealed? The authors sequenced three genomes from single cells in samples from three marine sites from the Pacific and Atlantic oceans. They are distinct from other chlamydiae and probably re­pre­sent deep branches within the phylum. In these genom­es, the researchers were surprised to find 5 examples in one sample and 20 in the others of genes that match those of bacterial flagella. Included are those for all the cytoplasmic, transmembrane, and extracellular com­pon­ents. These genes appear to be of ancient origin and not to have been acquired by recent horizontal transfer. How­ever, they are phylogenetically distinct from those of other bacteria. So, what are these genes for? Do chla­my­di­ae actively move about, perhaps chemotactically?

The researchers looked for genes involved in chemotaxis and indeed found them in all three samples. Given that chlamydiae have reduced genomes, finding such sets of genes suggest that they are required for survival in these organisms. Is it possible that these organisms, even if incapable of reproducing outside of host cells, are able to move about in the environment? The reason could be that if you are motile you may have an easier time finding new hosts. The energy requirement in the transit forms (ele­men­ta­ry bodies) could be stored in the glycogen they carry. This contradicts the generally held view that extracellular chlamydiae are metabolically inert. Most of them may be. But a few, perhaps just marine ones, may use motility gene products to adhere to particles, to act as sensors or to funct­ion as part secretion systems. Keep in mind that bacterial flagella are involved in many functions. This aspect of chlamydial biology clearly awaits retrieving the organisms, not just their genomes.

Should We Redefine Strict Intracellular Parasitism? 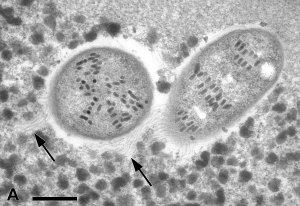 (Click for the complete figure ) Figu­re 4. Trans­­mission electron microscopy images of the ri­ck­ettsia "Candidatus Trichorickettsia mobilis". A In­side the macronucleus of a paramecium, show­ing several novel cylindrical electron dense par­ticles, arranged in a regular way. These unusual structurers may be phage constituents. Arrows indicate the flagella of the symbionts. B Inside the cytoplasm of the paramecium. Icosahedral electron dense particles are visible. C Negative staining of the rickettsiae showing numerous and long flagella. Bars: 0.5 µm. Source

Surprising as the finding of possible chlamydial motility may be, it is not unique. The other major group of strict intracellular bacteria, the rickettsiae, not only have fla­gellar genes but carry actual honest-to-goodness flagella. These organisms are found in ciliates (one in a Euplotes, another in a Paramecium ), where they display a peri­tri­chous morphology. They carry out an active circular mo­tion within their host's nucleoplasm in one case, and more or less linear motion in the cytoplasm in the other. Movement ceases when the host cells are crushed, so it may be confined to the interior of the cells. Why they move remains a mystery.

Chlamydiae and rickettsiae share flagellar genes but what else they have in common is not yet known. How­ever, they share having a more sophisticated genetic complement than has been expected from 'simple' in­tracellular parasites. Motility may well be a common fea­ture between them, albeit with distinctive cha­rac­ter­is­tics in each kind. Are we surprised? Hardly. The microbial world tends to reveal increasing complexity and the more we study, the more surprising and often wondrous the things we uncover.

This paper was discussed in the October 12 episode (#162) of 'This Week in Microbiology' (TWiM). Press play to listen now.