« Heat, Hydrogen, and Togas | Main | Investing in Diversification: Transport of Vitamin B12 Analogs by Microbes of the Human Gut »

As a means of communicating science, chalk talks can be an extremely effective way to engage the au­dience. These days such presentations have become part and parcel of the interview process of those seeking academic jobs in the life sciences. As much as I love such chalk talks, that's not what I will discuss today. Rather, I want to bring to your attention a historic chalk talk or, better said, a talk about chalk. Let me begin with the question: What is chalk? First answer is that most "black­board chalk" (the multi-colored sticks we use when giving chalks talks! ) is not really chalk, it's gyp­sum. "Real" chalk is a soft porous rock made of CaCO3 (calcite). And, strikingly, chalk deposits are by and large made up coccoliths, the microscopic shells of coccolithophores, unicellular algal mem­bers of phytoplankton (see also a piece in this blog ). That such massive rock formations result from microbial growth and death is common knowledge today but it was not so 150 years ago. That is what makes this particular talk about chalk so remarkable. I'm talking about the lecture "On a Piece of Chalk" that Thomas Henry Huxley (a.k.a. "Darwin's Bulldog" for being such a strong advocate of evolution ) gave in 1868 at a meeting of the British Association for the Advancement of Science in Norwich. I thank Rich Lenski for alerting me to the existence of this lecture some five years ago, after I gave a lecture at Michigan State presenting some our work on coccolithophores no less! But I don't feel too bad about having been ignorant of the existence of this wonderful es­say. At a recent chalk talk that I gave, I polled the audience. Only one of the forty or so "microbial scientists" in attendance had read it. Hopefully, many more will read it in the future if we pass the word. 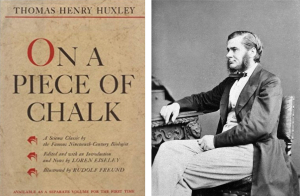 The persuasive nature of Huxley's narrative is a delight. While it is nowhere explicitly stated, I can imagine him with a piece of chalk in his hand, holding it up and start­ing: "If a well were sunk at our feet in the midst of the city of Norwich, the diggers would very soon find themselves at work in that white substance almost too soft to be called rock, with which we are all familiar as chalk." He sets out to place the very familiar writing tool – a piece of chalk – in the context of the Earth. Quick­ly, he moves from the rock underneath Norwich to the rock underlying all of Europe, the Middle East and Central Asia. It's all chalk! Then come two shockers.

First, he states that while made of a simple chemical, CaCO3, microscopic analyses had shown him that chalk is made up of the calcareous skeletons of tiny ocean dwellers. Coccoliths he calls them, that is "round rocks." Second, he reveals that in the process of mapping the North Atlantic Ocean floor in preparation for laying down of the first transatlantic cable, his friend Captain Dayman has brought up samples from the sea floor. Everywhere between Ireland and Newfoundland, the mud samples, when dried out, are chalk. And when analyzed, the mud samples contain the same calcareous skeletons and also some of their living carriers.

Many conclusions that were utterly unexpected at the time emerge from these findings. Norwich, as well as the vast expanse of land reaching into Central Asia, was once the bottom of an ocean. The process of chalk formation at the bottom of the ocean is slow and the chalk deposits are thousands of feet thick. The Earth is ancient and yet it is slowly but continually morphing. And most appealing to me, microbes shape the Earth.

The essay goes on to describe the fossils of large creatures embedded in the chalk and in doing so points clearly at the slow but undeniable pace of evolution. But, no more spoilers, I hope you will enjoy reading it in its entirety (for your convenience, a link to the PDF file is provided below ). What a wonderful example of effective communication of science! I find it very fitting that the most abun­dant coccolithophore in present day oceans, Emiliania huxleyi, is named in honor of the essay's author.