How to Calculate Avogadro's Number 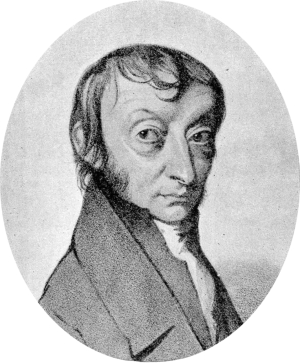 So, have you ever asked yourself who Avogadro was? His full name first: Lorenzo Romano Amedeo Carlo Avo­ga­dro, Count of Quaregna and Cerreto. He was born on 9 August 1776 in Turin into a noble family and died on 9 July 1856. He was perhaps not the most handsome man in Italy at the time. In 1811, he published Essai d'une ma­nière de déterminer les masses relatives des mo­lé­cules élémentaires des corps, et les proportions selon lesquel­les elles entrent dans ces combinaisons ("Essay on De­ter­mining the Relative Masses of the Elementary Molecules of Bodies and the Proportions by Which They En­ter These Combinations"), which contains his famous theory.

In 1820, he became professor of physics at the University of Turin. For all his aristocratic upbringing, he turned re­volutionary, which caused him to get fired from the chair. The dismissal was elegant, as the university officially declared: "...that it was very glad to allow this interesting scientist to take a rest from heavy teaching duties, in order to be able to give better at­tention to his researches." Deans, take heed. In 1833, he got his chair back and continued to do re­search on physics and quantitative measurements on molecules.

At the time he published his theory, it got scant attention. It went through a few gyrations, to be fi­nally accepted in 1860 when his fellow countryman, Stanislao Cannizzaro (of the Canizzaro reac­tion fame), laid the matter to rest. The actual number was determined in a number of ways but the main credit goes to Jean Baptiste Perrin who got the Nobel Prize in Physics in 1926, in part for this contribution. He also coined the term 'Avogadro's Number'.

Now you have it, a modern way to determine the value of Avogadro's Number is simply to count the number of bacteria in one human and multiply that by the number of humans on Earth.

Note to our particularly attentive readers: Yes, this post is closely related to the 'One Mole' post from 2014. Geneticists would probably call it a paralog.