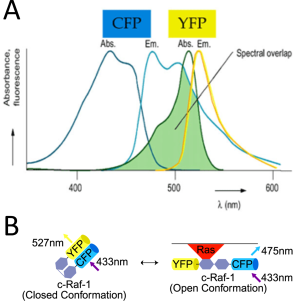 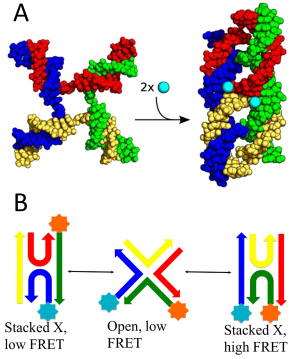 Figure 2. A Folding of the χ-form Holliday junc­tion into one of the two possible "stacked X" forms in the presence of cations. B Schematic of the junction folding that is induced by ion bind­ing. The R and X strands have a linker at the 5' end for attachment of the fluorescein (FAM) + tetramethylrhodamine (TAMRA) dyes, which are in close proximity in the "iso II" conformation (high FRET). (adapted from Source)

(Click to enlarge ) Figure 3. Molecular tension sen­­sor (MTS) overview. a Sensors are site-spe­cifically labeled with biotin (Avitag), the FRET do­nor Alexa 546 (KC), and FRET acceptor CoA 647 (ACP tag) and present the RGD sequence from fibronectin (TVYAVTGRGDSPASSAA). The (GPG­GA)8 sequence acts as an entropic spring that is stretched upon application of force. b Sensor molecules are attached to a coverslip via biotin and Neutravidin; the biotinylated PEG brush prevents nonspecific cell and sensor attach­ment. Integrin heterodimers attach to the RGD domain and apply load generated by the cell cy­toskeleton. c Single fibroblast (HFF) in the pro­cess of focal adhesion. yellow: high FRET/low force signal from MTS not interacting with in­te­grins. green dots: low FRET/high force signals for MTS interacting with integrin; blue dots: eGFP‑paxillin expressed by the HFF cells as in­di­ca­tor for focal adhesion. Note the co‑oc­cur­ren­ce of green coloring and blue dots at the cell pe­riphery. Source

Christoph Weigel is lecturer at Technical University Berlin, and at HTW, Berlin's University for Applied Sciences. He's an Asso­ci­a­te Blogger for STC.