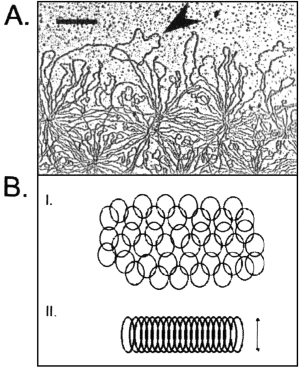 kDNA network structure. A Electron micrograph of the periphery of an isolated kDNA network from T. avium. Loops represent interlocked mi­ni­circles (the arrowhead indicates a clear exam­ple). Bar, 500 nm. B Diagrams showing the orga­nization of minicircles. (I) Segment of an isola­ted network showing in­terlocked minicircles in a planar array. (II) Section through a condensed network disk in vivo  showing stretched-out mi­ni­circles. The double-headed arrow indicates the thickness of the disk, which is about half the circumference of a minicircle. Source. Front­page: Electron micrograph of a segment of a kDNA network from C. fasciculata. Small loops are minicircles. Source

Kinetoplast DNAs (kDNA) are the most startlingly com­plex and unexpected DNA structures anywhere. Super­latives do not suffice, as you will see. kDNAs are found only in the kinetoplast of flagellates, structures involved in chromosome segregation, which is probably the rea­son why they may not be as well known as they deserve. In these organisms, mitochondrial DNA is called kineto­plast DNA and consists of a network of thousands of in­terlocked (catenated) circles that come in two sizes, maxi- (typically 20 ‒ 40 kb) and mini-circles (0.5 ‒ 1.0 kb). Usual­ly, maxis are present in only a few dozen per network, mi­nis in the thousands. To paraphrase a terrific review by Jensen and Eglund what do they do? "Maxicircles, like mi­tochondrial DNAs from more conventional organisms, encode rRNAs and several proteins involved in energy transduction (including subunits of cytochrome oxidase, NADH dehydrogenase, and the ATP synthase). Maxicircle transcripts in  T. brucei are heavily edited, an amazing re­action in which uridylate residues are incorporated into or removed from specific internal sites within the tran­script to create an open reading frame. Minicircles enco­de most of the small guide RNAs that are templates for editing specificity. Because the mitochondrial transcripts in  T. brucei contain so many editing sites, they require many different guide RNAs to produce a set of functional mRNAs. Thus, the minicircle population is large and hete­ro­geneous, with different DNA species encoding different guide RNAs. C. fasciculata minicircles are less complex, with one predominant minicircle class."

This wonderland deserves attention. Assuredly, reading about it will bring much enjoyment. For more on it, see the Jensen and Englund review (Paywall) and another one here (Free Access link here).