For many of us that reside in Northern latitudes, we are once again approaching the shortest days of the year. Yes, these can be days of extremely inhospitable cold and dark, but daylight will return and so will warm weather. For comfort, dwellers of these Northern lands have celebrated the pro­xi­mi­ty of the Winter solstice with various forms of holiday and merriment for millennia. But, know­ledge of better climes elsewhere has led us to look (and many of us to travel) south for solace. But what if keep going south, as far south as we can go before starting to head North again, what do we reach? Ah, yes, Antarctica! That barren desert land, extremely cold, is currently seeing its days of sunshine (along with extreme ultraviolet light), but will soon enough be returning to its cus­to­ma­ry months of darkness. Antarctica… As far our Earth's terrestrial ecosystems go, Antarctica re­mains about as extremely inhospitable at it can get. Who could possibly live there? 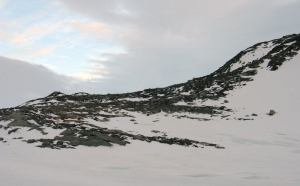 Here at STC we have been marveled and even mystified by the microbial wonders that thrive in the extreme en­vi­ron­ments of Artarctica before. As an example, I direct you to the description of the microbial pinnacles that form at the bottom of the ice-cold waters of Lake Vanda. And al­most exactly one year ago Elio, confessed that "a thermo­philic Southern Californian with an anthropocentric bent like myself (I live in San Diego), life in the cold seems both implausible and disagreeable." And then proceeded to de­scribe the remarkably ice-binding adhesins of Marino­mo­nas primoryensis in Reach Out and Touch Some Ice.

Now, once again, Antarctica is opening our eyes to the resourceful nature of microbes, to the abi­li­ty to make eke out an existence when there does not seem to be much more to live on than thin air. Antarctic desert soils can indeed be extremely poor in organic carbon. Yet these very same soils have been shown to harbor extremely diverse microbial communities. Suprisingly, these com­munities contain low abundance of the usual suspects when it comes to primary producers (cya­no­bacteria and algae). That begs the question of who are the microbes fixing carbon and how are they doing it in the Antarctic desert soils? A possible answer comes from a recent study (carried out at two sites, Robinson Ridge and Adams Flat) which suggests that atmospheric trace gases, H2, CO2 and CO, provide the most dependable carbon and energy sources to keep these ecosystems going. The authors were able to assemble 23 draft genomes of the most abundant members of these Antarctic microbial communities. These genomes encoded and expressed high-affinity hy­dro­genases, carbon monoxide dehydrogenases, and a RuBisCO lineage known to support che­mo­syn­thetic carbon fixation. Importantly, the authors carried out microcosm experiments that show­ed that these microbial communities were able to scavenge atmospheric H2 and CO to maintain their metabolism and carried out chemo­syn­thetic but not photosynthetic carbon fixation. Among the most abundant members of these microbial communities whose draft genomes were con­struc­ted, were members of the candidate phyla WPS-2 and AD3. To supplant these meaningless designations, the authors propose names for the phyla: Candidatus Eremiobacteraeota (desert bacterial phylum) for WPS-2 and Candidatus Dormibacteraeota (dormant bacterial phylum). I like these names… Somehow, they remind me of just how fortunate I am that even in the depths of Winter, I don't have to subsist alone in a nutritional desert (quite the contrary!) and I don't have to sleep out in the cold. To all of STC readers that reside in the Northern hemisphere (and I mean north of the tropics!), please do celebrate the coming solstice, things will get better. And I hope you are able to enjoy plentiful meals and cozy warm beds at night!