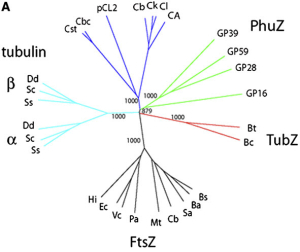 It’s not news to STC readers that phages encode cyto­ske­letal proteins. Daniel Haeusser's fine post related this story as it was known in 2012. Two key papers published that year investigated the tubulin homologs found in phage genomes. At that time, phage-encoded tubulin homologs fell into two phylogenetic clusters. One group, dubbed TubZ, was found in several low-copy number Ba­cillus plasmids and in the genome of Clostridium botu­li­num phage c-st. This phage is temperate, that is, when it enters a host cell it can either launch an immediate lytic infection or its chromosome can reside peacefully for generations as a prophage. Although most prophages integrate into the host chromosome, the c-st prophage does not. Instead it behaves as if it were a low-copy number plasmid. As such, it uses a plasmid-like mecha­nism to ensure that after replication each daughter cell inherits at least one copy. A 2012 paper from the Andreu lab in Madrid demonstrated that the phage's TubZ pro­te­in assembled dynamic filaments in vitro and further im­plicated these filaments in the partitioning of the c-st plasmid prophage. As with other plasmid partitioning systems, the TubZ filaments were anchored to centromere-like regions in the phage DNA so as to directly reposition the DNA within the cell.

That same year, a paper from the Pogliano lab in San Diego explored a divergent family of tubulin homo­logs known as PhuZ (phage tubulin/FtsZ). Since PhuZ homo­logs were found in the genomes of lytic phages, they were predicted to perform a different, but unknown, function. One clue as to what they might be doing: all PhuZ genes identified resided in the genomes of large phages (with genomes of 186–316 kbp). These research­ers then focused on one of those phages, phage 201φ2-1. This myovirus infects Pseudomonas chlororaphis; its 316 kbp genome encodes 462 putative pro­teins, including PhuZ. Its PhuZ assmbled dynamic filaments in vitro and in vivo. During infection these filaments formed a spindle-like structure that appeared to "push" the replicating phage DNA to midcell. The action here was essentially different from when partitioning plasmids. Instead of moving a few plasmid prophages in opposite directions, many replicating phage chromosomes were being pushed together to the center of the cell. This raised questions as to how the filaments interacted with the DNA and what part this process played in phage replication. Fast forward to 2017 and a follow-up study from the Pogliano lab…

The birth of a phage compartment 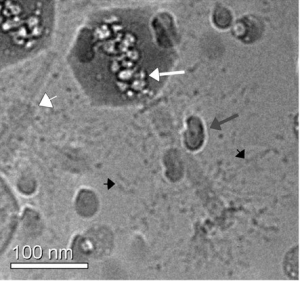 The Pogliano lab proceeded to investigate the role of these PhuZ filaments during phage replication. A series of experiments sought to identify PhuZ’s accomplices. They could likely be any of the phage's putative non­struc­tural proteins, that is any phage-encoded proteins not found in mature virions. The researchers made GFP-fu­sions for at least 140 of them. One prime suspect emer­ged from this: GP105, the first protein made following infection (starting at 20 min post infection [mpi]) and the one synthesized in the largest quantity. To see what both PhuZ and GP105 were doing early during infection, they used fluorescence microscopy to simultaneously monitor the location of mCherry-PhuZ and GFP-gp105. Initially, GP105 formed a small focus in the region of the cell pole, the site of entry of phage DNA into the host cell. They reasonably speculated that at this early stage of de­ve­lop­ment the clustered GP105 might offer phage DNA some protection from host defenses – restriction endo­nuc­le­a­ses, for example. Also at this early stage, PhuZ assembled into filaments at both poles and began to form a spindle. By 45 mpi, a larger GP105 shell was seen surrounding the replicating phage DNA, and the two together had been "pushed" to the center of the cell. To watch this migration and enlargement of the GP105 shell concurrent with the lengthening of the PhuZ filaments be­tween 30 and 90 mpi, click here. 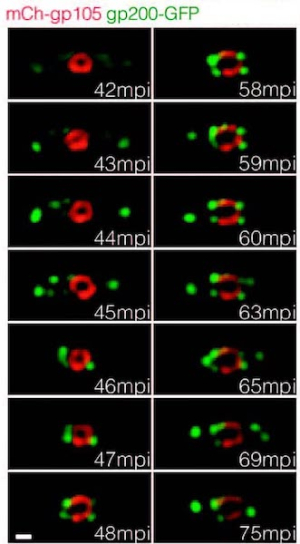 Figure 4. Time-lapse microscopy of a phage compartment during infection. Red = the shell protein mCherry-gp105; green = predicted capsid protein gp200-GFP. The capsid protein was initially diffuse (42 mpi) and then assem­bled foci on the cell periphery (43 to 45 mpi). The foci migrated to the shell (45 to 46 mpi), a journey that required 1 to 2 min. They remai­ned attached to the shell for 12 min before being released (59 to 75 mpi). Source: Chai­keeratisak et al., 2017.

As was the case for other tubulin/FtsZ proteins, assembly of PhuZ filaments is GTP-dependent. When the research­ers replaced PhuZ with a mutant form unable to hydroly­ze GTP, no filaments were formed and the GP105 shell did not migrate to midcell. Although these PhuZ fila­ments were dynamic, fluorescence recovery after photo­bleaching (FRAP) showed that the GFP-gp105 shell was quite stable. All of this combined suggested that the GP105 shell was being passively relocated. Moreover, the shell appeared to form a compart­ment that organized phage replication and assembly activities, a compart­ment analogous to the "virus factories" or "viroplasms" previously seen in eukaryotic cells.

If these GP105 shells establish the cytoplasmic region in which phage activities proceed, then one can predict which phage proteins should be located inside, outside, or bordering the shell. With that in mind, the researchers expressed GFP fusions to 52 relevant phage proteins and monitored their subcellular location during infection. Overall, the results demonstrated that phage activities are highly localized within the cell. This was not surpri­sing given that bacterial cells are themselves highly orga­nized – not merely "bags of enzymes." Specifically, enzym­es involved in DNA replication or repair – including phage- encoded homologs of DNA ligase, DNA helicase, and RecA, as well as a host-encoded DNA topoisomerase – all co-lo­calized with DNA within the shell. Similarly, two phage ho­mologs of RNA polymerase β' subunits were also found there. In contrast, ribosomes and host proteins engaged in translation were absent. These observations implied that phage transcripts generated within the fac­tory must be exported to the cytoplasm for translation, and that some of the result­ant protein products must then be selectively imported into the fac­tory. This was demonstrated to be the case for GP37, the phage RecA homolog, whose transport from the cytoplasm into the fac­tory was monitored using GFP-gp237. Phage enzymes of the nucleotide metabolism pathway are also excluded from the factory zone, indicating that nucleotides for both DNA replication and transcription must also be imported. All of this is reminiscent of what has been seen for viral fac­to­ries in eukaryotic cells, but these resourceful phages do this in bacterial cells that lack membra­ne-bounded subcellular compartments.

Where does phage capsid assembly and DNA packaging take place? For this, the researchers prepared a GFP fu­sion with the major capsid protein (GP200) and then tracked its location in infected cells that were also expres­sing mCherry-gp105 (the shell protein). As you can see in Figure 4, at 43–45 mpi the capsid proteins comprised small foci – empty capsids – adjacent to the cell membra­ne. Within a minute or two, those capsids migrated to the border of the GP105 shell where they remained for ~12 min. Earlier experiments had shown that the entire shell was continually rotated by the active PhuZ filaments. This subsequent experiment revealed that the capsids rotate with the shell, indicating that the capsids were securely docked to the factory boundary. While there, they were filled with phage DNA and then released into the sur­roun­ding cytoplasm. Cryo-electron tomography (cryo-ET) confirmed these steps in virion construction. Figure 5 zooms in on individual phage capsids as they are assembled at the cell membrane, filled with DNA while docked to the shell, and lastly joined to a pre-assembled tail. Beautiful! A late stage phage factory within its cellular context is vividly portrayed by the cryo-ET reconstruction in Figure 6.

This recent research suggests some possible answers to a question posed by Daniel in his post five years ago. Why, he pondered, might a phage encode its own cytoskeletal proteins rather than simply pilfering those of its host? After all, Bacteria and their plasmids offer a variety of tubulin homologs free for the taking (e.g., FtsZ, BtubA/BtubB, TubZ). Of necessity, phage with smaller genomes must make do with what their host provides, but those with larger genomes, such as Pseudomonas phage 201φ2-1 with its 462 genes, have the luxury of encoding their own spe­cia­lized variants. These proteins, in turn, make replication for these large phages so efficient that they can successfully compete with their streamlined competitors. Another benefit: when a phage encodes its own proteins for replication, it eliminates the possibility that ongoing evolution of an essential host protein will render it incompatible with phage components. Moreover, the phage can evolve its own homolog to intimately interact with its chromosome or proteins so as to better serve its own purposes. 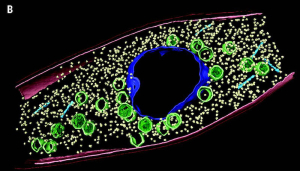 Phage do replicate and evolve – two key criteria that se­parate the living from the non-living. Nevertheless, pha­ge, and other viruses, are often viewed as obligate pa­ra­sitic entities that can do nothing more that hijack cellular functions. While it is true that they can replicate and evolve only within a ribosome-containing cell, the larger phages with hundreds of genes encode unique mecha­nisms for sophisticated activities. Witness phage 201φ2-2 that creates a spindle from dynamic filaments to move its DNA around, a protein-bounded compartment in which to manage its DNA replication and transcription, and an efficient assembly line for production of mature virions. To me, such phages are behaving more and more like a respectable life form. Perhaps it is time that not only phage, but all denigrated parasites, be accorded the re­cognition and respect warranted by their sophisticated mastery.