A Whiff of Taxonomy – Granulicatella and Abiotrophia 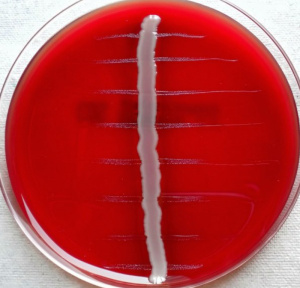 Streptococcus pneumoniae and its ilk are among the first human pathogens discovered. Streptococci were first de­scribed by the Austrian surgeon Theodor Billroth in 1874, and Louis Pasteur showed in 1879 that they were the eti­o­logical agent (=microorganisms and microbial toxins that cause disease in humans) responsible for puerperal fever in women. Streptococcal infections vary in severity from mild throat infections to life-threatening infections of the blood (bacteremia ) or organs (pneumonia, me­nin­gi­tis, necrotizing fascitis ). Clinical microbiologists have of­ten struggled but mostly found ways to cultivate strep­to­coc­ci in the lab (to reasonably cover this topic it would need an expert streptococcologist ). One report in 1961 described streptococci that could hardly grow even on special media but did reasonably well when grown in the proximity of other bugs (='satellitism' ), for example next to Staphylococcus aureus  (Figure 1) or next to cory­ne­bac­te­ria (see frontpage ). Apparently, they depend on me­ta­bolites secreted by their neighbors. What might these metabolites be? In the case of these streptococci, there is some evidence that they require pyridoxal (vi­tamin B6 ) and cysteine. These may in fact serve as early examples of what microbiologists are more and more aware of today: microbial life is a commu­ni­ty enter­prise. Originally, they were classified as 'nutritionally variant streptococci' (NVS), and later on you find them in the literature with the names of Granulicatella and Abiotrophia (Greek prefix ἄ (a)-, negative (un-); noun βιος (bios), life; noun τροφιά (trophia), nutrition), each genus having a handful named species. Species names and taxonomic affiliations have changed several times over the last years (I deliberately withhold the messy details ) until the issue was finally settled by taking in­to account their 16S rRNA phylogeny, which suggests that both represent different gene­ra. 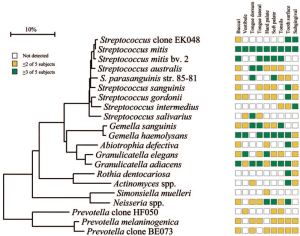 Figure 2. Site specificity of predominant bac­te­rial species in the oral cavity. In general, bac­te­rial species or phylotypes were selected on the basis of their detection in multiple subjects for a given site. Distributions of bacterial species in oral sites among subjects are indicated by the columns of boxes to the right of the tree as fol­lows: not detected in any subject (clear box), <15% of the total number of clones assayed (yel­low box), ≥15% of the total number of clon­es assayed (green box). The 15% cutoff for low and high abundance was chosen arbitrarily. Marker bar represents a 10% difference in nuc­leotide sequences (16S rRNA). Source

Although initially identified as pathogens, both Granu­li­ca­tella and Abiotrophia are among the many bacteria that thrive on and in humans without doing any harm. They turn pathogenic only if they happen to get to the 'wrong places' (think of the commensal Escherichia coli that are part of the human gut microbiota but can turn really nas­ty when they get into the bloodstream by, for example, an injury).  Granulicatella and Abiotrophia have been found as normal residents in the human oral cavity (Fi­gure 2). Of the Gram-positives, Streptococcus mitis is found most often in all 'sample sites' of the oral cavity, closely followed by Gemella haemolysans and Granu­li­ca­tella adiacens. Interestingly, these three have all been found to cause or be associated with endocarditis. If you wonder how these bacteria that quietly inhabit your mouth can cause heart inflammation ask your dentist: it is well known that periodontal abscesses can 'release' them into the bloodstream. Granulicatella and Abio­tro­phia have also been found associated with implanted prostheses, infections that are not easy to treat (as was recently experienced by Elio in one of his knees ).

To give you another whiff of their 'family ties' among the Gram-positives: the DnaA proteins – re­spon­sible for initiation of chromosome replication – of Granulicatella and Abiotrophia are ~50% identical (BLASTp). Compare this to their identity with the DnaAs of Streptococcus mitis (43%), Ge­mella sanguinis (45%), Bacillus subtilis (46%), and that of the Gram-negative Gam­ma­pro­te­o­bac­te­ria E. coli (40%). The DnaA proteins of E. coli K-12 and Pseudomonas aeruginosa PAO1, both of dif­ferent families of the Gammaproteobacteria, share 63% identity. In another quick-and-dirty BLAST search, I saw much the same 'gradient' of pro­tein sequence similarity for another key replication factor, DnaN, the beta-clamp of Dna Poly­me­ra­se III. This suggests that Granulicatella and Abiotro­phia are, at best, more distant cousins.