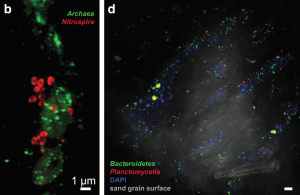 What you see here in Figure 1d competes with a NASA photo from 2012 for the best shot of the Milky Way but – spoiler alert! – it's actually a close-up of some humble mi­crobes gathered on a grain of sand (another one is on the frontpage ). I concluded the previous post about bacteria on sand grains with the question: and where are the ar­chea ? The reason for this question wasn't sheer curiosity: based on a survey of prokaryotic diversity in the sub­sur­fa­ce water of the Pacific Ocean, Karner et al.  estimated that the global oceans are populated by 1.3 × 1028 archaea and 3.1 × 1028 bacteria (including an estimated 2.4 × 1028 SAR11/ Pelagibacter ubique cells ). No, I won't juggle with numbers here again. But if archaea do indeed represent ~1/3 of the prokaryotes in the oceans it would be sur­pri­sing to not find them at least in the upper layers of the sediments, on sand grains for example. Well, here they are, see Figure 1b.

When Probandt et al. made their 'census' of microbes on single sand grains in a sample of North Sea sedi­ment they found up to 105 microbial cells per grain, and these were, in their majority, mem­bers of 10 bacterial taxa. To also detect archaea they employed CARD-FISH, a technique that allows to detect microbes from phylogenetically diverse clades directly in their natural habitat (CARD-FISH is briefly described in the legend for Figure 2 ). According to their oligonucleotide pro­be, the single cells and small aggregates of archaea (3 – 10 cells; green dots in Figure 1b ) belong to the Thaumarcheota, a phylum of the archaea that was formerly 'lumped together' with the Cren­ar­cheota, and whose known member species are chemolithoautotrophic ammonia-oxidizers. Sus­piciously, these archaea were sometimes found in close neighborhood (0 – 10 µm ) of small ag­gre­gates of Nitrospirae bacteria (red dots ). 'Suspicously' because it is well known that archaeal ammo­nia oxidizers (AOA) and their bacterial counterparts from the phyla Nitrospirae and Beta­pro­teo­bac­te­ria (AOB) usually occur as densely clustered communities, for example in waste water treat­ment plants (with the archaea exceeding the bacteria in cell numbers by a factor of 10 ). The co-lo­calization of archaeal and bacterial ammonia-oxidizers on the sand grains indicates that the en­tire nitrogen cycle can take place in the upper, permeable layer of seafloor sediments where meta­bolic intermediates can be transported advectively through the matrix. 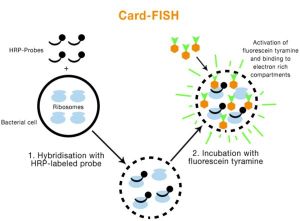 Figure 2. Setup of a CARD-FISH ('Catalyzed Re­por­ter Deposition Fluorescence in situ Hybri­di­za­tion') experiment. Prokaryotic cells in solution or in situ are permeabilized by treatment with lysozyme and/or achromopeptidase. Step 1: af­ter inactivation of endogenous peroxidases, the permeabilized cells are incubated with rRNA-targeting oligonucleotides for hybridization; the oligonucleotides are coupled to horseradish per­oxidase (HRP). Step 2: The cells are incu­ba­ted with fluorophore-coupled tyramide in the presence of H2O2. HRP coupled to the hybridi­zed oligonucleotides catalyzes locally a reaction that results in the production of hydroxyl radi­cals (·OH) from H2O2 in the presence of O2·–. The radicalized tyramine now binds covalently to nearby protein molecules, thereby amplify­ing the signal (up to 100-fold). The readout is done with a confocal laser microscope. Modi­fied from Source

By combining metagenomics with cell identification by localization – thus allowing the reconstruction of mi­cro­bial communities and their metabolic pathways – the study by Probandt et al. is an excellent example for the resolution power of the culture-independent charac­te­ri­za­tion of a particular microbial habitat. Add to this meta­transcriptomics (a wordmonster, meaning that regulation and expression profiles are generated in addition to and for projection onto metagenomic data ) and you can ac­cess not only questions like "who's there?", and "who's where, exactly?", but also "who's busy and thriving? who's chil­ling?". This doesn't sound a lot like an approach that could fit into the straightjacket of Koch's postulates but, hey, studying microbial consortia in the wild is more fun. Ah! Before I forget: there are also eukaryotic microbes, and they also populate the sand grains. Based on 16S rRNA sequences Probandt et al. classified them as algal chlo­roplasts, and based on morphology as (mostly ) dia­toms with a high species diversity. They were also detec­ted by chloroplast autofluorescence and a Eukarya-spe­ci­fic probe in CARD-FISH experiments.

An aside: sand grains had already attracted the ever-cu­rious Antonie van Leeuwenhoek (1632–1723), and he in­cluded a drawing of sand grains as he saw them through his microscope in a letter to the Royal Society, 4th Decem­ber 1703. No, he did not see his cherished animalcules on the sand grains.