One Grain of Sand

Microbiologists face three problems today when talking to fellow biologists or any curious audi­ence: the numbers of prokaryotes and unicellular eukaryotes, their diversity, and their tininess (ti­ny in their majority, for notable exceptions see here and here in STC ). Sure, one can do the maths and juggle with numbers. That's entertaining, and everybody is amazed when they learn that mi­cro­biologists easily count up to 108 individual cells in an E. coli  colony with a diameter of ~1.5 mm on an LB-medium agar plate. As individuals, that's roughly equivalent to the population of the Phi­lippines, #12 on the Wikipedia list of the most populous countries. But microbiologists struggle no less than geologists, geochemists, or lay people with comprehending what the es­ti­ma­ted 2.4 × 1028 SAR11/Pelagibacter ubique  cells in the world's oceans mean for, say, Earth's carbon cycle (they are probably the most abundant of the small things, considered here by Merry ). Or take the Pro­chlo­ro­coccus  federation with an estimated ~1027 cells in the oceans, which is, together with the entire photosynthetic picoplankton, responsible for the production of ~50% of the atmospheric oxygen on our planet.

Juggling with numbers is the fun part, but what's completely bursting the bounds of imagination is the diversity of the prokaryotes as revealed during the last decade by metagenomics. Consider, for a moment, that a banana and a chimp are genetically more similar to each other than the above mentioned Pelagibacter  and Prochlorococcus. Banana and chimp Rad51 proteins, for example, are 70% identical while the Rad51 orthologs in bacteria, RecA, of Pelagibacter  and Pro­chlo­ro­coc­cus  are only 58% identical (though still sharing ~40% identity with Rad51 of banana and chimp, or Ho­mo sapiens for that matter ). Both bacterial species belong, like banana and chimp, to different ta­xonomic phyla, of which we presently have 100+ for the prokaryotes. And, just last month, Parks et al. added a whopping ~8,000 bacterial and archaeal genomes assembled from metagenomic da­ta to the 'master collection' (as of December 2017, NCBI lists 125,700 sequenced prokaryotic geno­mes; many are still incomplete and there's also a great deal of redundancy, for example >200  H. py­lori genomes ). Thus we do not only have many diverse phyla but these are populated by vast num­bers of different extant species (this despite the ongoing debate of what constitutes a 'bacterial species', and although the phyla are probably not evenly populated; you can get an impression here ). 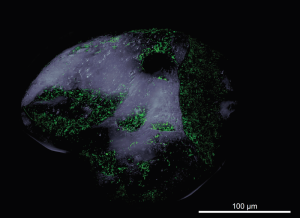 But before you feel drowned in numbers, here's some­thing more tangible. Something so small that it is close to the limit of being visible to the naked eye but still per­cep­tible when you take it between thumb and index finger: a grain of sand in the sub-millimeter size range (Krumbein phi values of 1 – 2, or 'medium sand' in the terms of gra­nulometry, see frontpage picture ). Katrin Knittel and her co-workers at the MPI for Marine Microbiology in Bremen, Germany, discuss in a recent study their 'population cen­sus' of the sand grain shown in Figure 1 and of 17 addi­tio­nal single sand grains (SSGs 1 – 17, portrayed in the top row of Fig. 2 ). They had picked these sand grains from push core samples of the first 2 cm of the subtidal sedi­ment at a depth of 8 m on a site within the shallow 'Hel­go­land Roads' just off the coast of the island of Helgoland in the North Sea (I did not know before that the 'Helgoland Roads' – not the usual 'roads' for car traffic here but the maritime term for an anchorage outside a harbor – are monitored by marine biologists since 1962 on a daily ba­sis, while plankton research at this site actually dates back to the end of the 19th century ).

The sand grain you see in Figure 1 is densely populated by microbes. To visualize those microbes, Probandt et al. stained their nucleic acids with SYBR-Green I (stains preferentially dsDNA, less so ssDNA and RNA ) in a solution that also contained Mowiol 4-88 (a polyvinyl alcohol used to embed histological samples ). After hardening of the polymer (keeping any attached microbes in place ), the grain was scanned with a confocal laser microscope for fluorescence, and, simultaneously, for its surface topology with a transmitted-light microscope. What you then see in Figure 1 is a three-dimensional reconstruction from both data sets. Obviously, microbes do not populate the sand grain evenly but cluster in indents and cavities while avoiding exposed convex areas (a fact known since at least 1968 ). The authors found similar biased distribution on other grains but they are not sure whether it is rather a consequences of grains rubbing with each other during turbulent move­ments of the upper sediment layer thus dislodging microbes by shear forces (shown earlier to oc­cur readily in an experimental setup ) or whether growing in indents and cavities shelters microbes from grazing by larger eukaryotic predators. In any case, it's a sign for ongoing drama on the sea­floor. 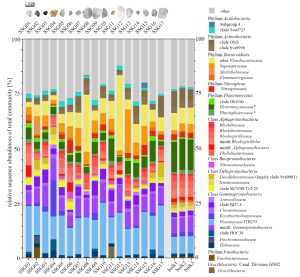 Figure 2. Composition of bacterial communities on sin­gle sand grains and in bulk sediment as shown by Illumina par­tial 16S rRNA gene se­quen­cing. Depicted are the 10 most sequence-abundant family-level clades found on the indi­vi­dual sand grains or in bulk sediment da­tasets. Remaining family level clades are summarized as "other". Clades described as "uncultured (un­cult)" could not be fur­ther classified and might contain nume­rous OTU0.97 of respective taxon level. Depicted community composition is bas­ed on subsampled datasets (N=44,901). * Se­quen­ces classified as Planctomyce­ta­ceae and Phycisphaeraceae rather com­prise several un­classified families within the class Planc­to­my­cetia and Phyci­sphaerae, respectively. Source (Suppl. Ma­terial; Open Access PDF here)

A closer inspection of more sand grains revealed all com­mon microbial morphotypes such as short and long rods, coc­ci as well as filaments, which grew mostly in mo­nolay­ers with, as evaluated by software-supported measure­ments, cell-to-cell distances in the lower micrometer ran­ge, that is, virtually side-by-side like in biofilms (already seen in scanning electron micrographs of bacteria attach­ed to sand grains from 1978, here's an example; note that at that time biofilm was called 'polymers', the term 'biofilm' became popular only in the 80s ). As control for the software-aided in situ  counts they performed 'total cell counts' by dislodging cells from the grains by several rounds of ultrasonication, purifying the supernatants by filtration, staining them with acridine orange (a DNA/RNA stain ) and counting the stained cells under an epi­fluor­es­cen­ce microscope. The authors do not mention it expli­cit­ly but it seems that acridine-stained cells gave more re­li­able cell counts while the SYBR Green‑stained cells al­lowed safe statements about cell-to-cell distances and about preferential cell cluster localizations that reflect the topology of the grains. I mention this to illustrate that rarely a single method gives the experimenter all the wanted answers.

For one set of 17 sand grains, Probandt et al. asked the mi­crobial populations of each grain for their 'ID cards', that is, they PCR-amplified a particular stretch of 16S rDNA (=the stretch of chromosomal DNA that encodes the 16S ribosomal RNA ) directly from the grains by appropriate primers. You can take that quite literally, as they write:"Grains were randomly picked with sterile, DNA-free forceps, size and appearance documented by photographs and transferred into PCR strips (one grain per re­act­ion) filled with sterile water. The protocol for SSG-PCR was as described for bulk sediments. For each grain, new forceps were used and dipped into a separate PCR reaction mix as a negative con­trol before picking the grain. There was no PCR product in any of the negative controls." The PCR products were bulk‑sequenced and, as is common among bioinformaticians, the obtained se­quen­ces grouped in OTUs, that is, 'operational taxonomic units' used as proxy for species when apply­ing a 97% cut-off (OTU0.97). They could thus assess the approximate distribution of higher-order taxa (phylum, class, order, family ) and species richness in the collection of their sequence data, that is, from uncultivated bacteria and archaea (Figure 2). The authors concluded: "...each sand grain investigated in this study was the habitat for around 105 cells representing several thousand species. The average distance between any two cells on a sand grain in protected areas was 0.5±0.7 μm and therefore 100-fold shorter than the average distance between cells in the water column." The 10 most sequence-abundant family-level clades were the same on all sand grains, and not grossly different from those in bulk sedi­ment samples. However, the Planctomycetes (see Daniel's post on the PVC phylum here in STC ) were more numerous and more differentiated in bulk sedi­ment while the Woeseiaceae apparently populated the grains with more. Woeseiaceae is a little studied family (just 3 PubMed entries ) within the Chromatiales, an order of the Gamma­pro­teo­bac­te­ria in which many members are photosynthetically active yet breath sulfur instead of oxygen (formerly, they were called 'purple sulfur bacteria' ). They summarize their findings:"In contrast to stable soils, the dynamic and permeable surface sediments are characterized by fluctuating redox conditions and substrate availabilities resulting in diverse and versatile microbial communities. Our data suggest that each sand grain is a small microbial repository from which the major cycles of carbon, nitrogen and sulfur transformations typical of marine benthic habitats could be re­con­sti­tu­ted." There you have it, a world on a grain of sand.

I should mention that Probandt et al. did not make a capricious trip from Bremen to Helgoland only to collect a spoonful of sand grains for analysis (3 h by ship from Bremerhaven, no big deal ). The 'sand grains' where part of their in-depth analysis of microbial communities in sublittoral sur­face sediments and bottom water at several sites in the North Sea (at distances of up to ~162 nmi [nautical miles] from Helgoland, that is, roughly 300 km ). They found in this survey a fairly similar composition of bacterial taxa in these sediments as on the sand grains from the Helgoland Roads, and in the respective bottom water samples a prevalence of (no surprise, see first paragraph) SAR11/ Pelagibacter ubique, which was virtually absent in the sediments (you can peek at their summarizing table here ). They did apparently not run into the 'marine snow trap' (mentioned by Roberto here in STC ), that is, slowly settling organic debris – including DNA – from dead organisms in the water column obscuring results from sediment analysis. The numbers of cyanobacteria were low in the sediments and in the bottom water samples at any but one of the sites, which is unsurprising as – to come full circle – Prochlorococcus doesn't thrive in northerly latitudes above ~40°.

You wonder whether there weren't any archaea on those sand grains ? There were, of course, and I will soon come back to them in a follow-up post.