A Whiff of Taxonomy – The Tenericutes

Our reader Bradley K. Sherman commented in the recent 'Tree of Life' post: "Hug has Tenericutes top-center in the tree" (Figure 1). He said: "I don't recall this phylum being discussed here at STC". I replied that we had on several occasions looked at Mycoplasma – which are Tenericutes – but that he was right and we would put them on our to-do list. Here we go... 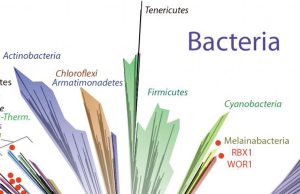 Figure 1. The phylum Tenericutes as branch of the Firmicutes in the 'Tree of Life' by Hug et al.; see complete tree here.. Source

All known Tenericutes have one morphological feature in common: they lack a peptidoglycan cell wall (they are thus refractory to Gram staining, as Elio had expertly explained here ). Their name tells the story: Tenericutes means 'soft skinned'. Not having peptidoglycan as 'sup­port stocking', many assume the form of blobs or drops, and, with some exceptions, do not come in familiar sha­pes like rods or cocci. Think of them as sort of pro­kar­yo­tic amoebae. Also much like amoebae, they have cyto­ske­letons, with the tubulin-like FtsZ and the actin-like MreB proteins as the best known components. This cyto­ske­le­ton enables Spiroplasma, for example, to assume a spiral morphology that supports active swimming, and Haloplasma contractile  to dynamically switch bet­ween blob-like, largely extended, and spiral morphologies (here's a picture ). However, unlike amoe­bae that you find in many eukaryotic branches (human macrophages are essentially amoebae; see Talmudic Question #129 ), all Tenericutes belong to one phylum. They branched-off from the Firmi­cutes an estimated 65 million years ago (no apparent connection to the Chicxulub impact ).

Now some numbers. For the phylum Tenericutes, the NCBI taxonomy lists one class, Mollicutes, to­gether with the genus Candidatus Izimaplasma (with 3 species ), 36 'unclassified Tenericutes', and two 'environmental samples'. Within the class Mollicutes you find the orders Acholeplasmatales, Anaeroplasmatales, Entomoplasmatales, Mycoplasmatales, and the inevitable 'unclassified Molli­cutes' and 'environmental samples'. There are presently ~980 listed species in the phylum, with some 85 sequenced genomes. So, this is a modest phylum by numbers, but this might well be an underestimate, or 'undersampling', as most Tenericutes were found only by close inspection of vertebrate and plant cells: they tend to live intracellularly or intercellularly, are difficult to detect due to their small size, and it is often hard to find out whether they are (endo)symbionts, parasi­tes, pathogens, or commensals. But despite their mostly intracellular occurrence in various eu­kar­yotic hosts for which they are notorious among microbiologists (and feared by researchers work­ing with mammalian cell lines ), some free-living Tenericutes are now known, and I introduce here one that was found at an, by all means, unexpected location. Skennerton et al. isolated anaerobic bacteria from deep-sea methane seep sediments at Hydrate Ridge, at depths of 600 – 776 m, and 100 km offshore Oregon (see here ). Bulk-sequencing of their samples, metagenomic assem­bly, and binning (few words for >1 year of intense work ) resulted in two distinct, highly complete genome bins, designated Izimaplasma  sp. HR1 (1.88 Mb) and Izima­plas­ma  sp. HR2 (2.12 Mb), that belong to the Tenericutes bas­ed on phylogenetic analysis (Figure 3). An aside: a third isolate, Izimaplasma  sp. ZiA1 (1.88 Mb), was just recently sequenced; it was isolated from a toluene degrading and iron reducing microcosm. The Izimaplasma  sp. HR1 and HR2 genomes have a low GC-content (HR1: 34.2%), and show signs of genome streamlining, with high protein-coding percentage and a small number of repetitive ele­ments. The authors reconstructed the metabolic path­ways in the two genomes, leading to a model of central carbon metabolism reliant on fermentation of simple sugars, similar to that of other Tenericutes. Both Izi­ma­plasma  genomes contain a complete set of genes for the Embden-Meyerhof-Parnas (EMP) path­way of glycolysis and a complete pentose phosphate pathway. The tricarboxylic cycle was incom­plete, with lactate as the probable end point. Both genomes encode genes necessary for metabo­li­zing sucrose and maltose. HR1 has, in addition, genes to utilize fructose and trehalose, while HR2 contains genes to metabolize galactose and cellulose. Both genomes also contained the arginine dihydrolase pathway that the Mollicutes use as a source of ATP through the oxidation of arginine to ammonia. Reducing equivalents generated by anaerobic fermentation can be converted to hy­drogen as both genomes contain two types of iron hydrogenases and hydrogenase maturation genes. One hydrogenase couples with ferredoxin and could be used to remove excess reducing equivalents during anaerobic fermentation. The other hydrogenase is linked with NADP+ and sug­gests that it may generate NADPH for the production of biomolecules. Hydrogenase genes are present in Erysipelotrichales, Haloplasma contractile  and Turicibacter sanguinis  but not in the ge­nomes of the Mollicutes. Both Izimaplasma  genomes contain homologs of the sodium translocat­ing Ferredoxin-NAD+ oxidoreductase (RNF complex) and the proton translocating complex I of the respiratory chain. The RNF complex has been described for the genomes of some Acholeplasmata­les and many of the Erysipelotrichales; however, complex I has not been found in any other Tene­ri­cutes bacterium.

In an attempt to culture Izimaplasma, they used the predicted metabolism and phenotype from both annotated genomes as a guide for designing an enrichment medium, which contained arti­fi­cial seawater supplemented with vitamins, trace minerals, glucose, yeast extract, the cell wall-syn­thesis inhibiting antibiotics ampicillin and vancomycin (to supress growth of both Gram-positives and Gram-negatives ), and was reduced by adding Ti(III)‑nitrilotriacetic acid. The enrichment bot­tles were incubated at 10 °C under N2. After 6 weeks, the community was dominated by two cell types: small coccoid cells (0.5 – 1.0 μm diameter ) that positively hybridized to a Izimaplasma-spe­ci­fic FISH probe, and larger coccoid cells that hybridized to a general bacterial probe (the authors do not mention whether they could identify them ). This community composition remained stable for over five passages, and 16S rDNA Sequencing confirmed the presence of ~60% Izimaplasma  cells (98% identity with Izimaplasma sp. HR1 ) in the enriched sample. They could thus show that the Izi­maplasma  can grow under the chosen conditions, although they did not yet obtain a pure culture.

The electron cryomicro­graph of an Izimaplasma  cell from the enriched culture with its diameter of ~1 µm shown in Figure 2 is somewhat disappointing in that, due to lacking contrast, no details of the cell's cytoplasm are resolved: no ribosomes, no nucleoid (in contrast to the electron cryomicro­graphs of the much smaller CPR bacteria ). However, one can clearly see the lack of a cell wall, which is always particularly impressive with this technique. So this is an example for a cell wall-less bac­te­rium of the Tenericutes that thrives extracellularly in its natural habitat. 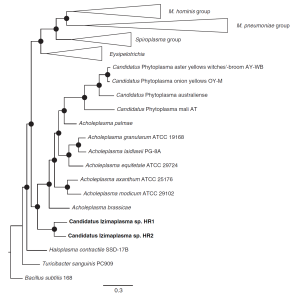 Despite the Tenericutes being generally accepted as a distinct phylum, their root and branching point from the Firmicutes are not entirely clear. This is a common prob­lem with phylogenies based on molecular data where leaves and smaller twigs are, in general, well separated, yet exact branching points are difficult to nail down the closer one gets to the root(s). It depends on which mole­cular markers are chosen for the analysis, and how many species/strains are included. In a phylogenetic tree ob­tained from 38 concatenated protein sequences from single copy genes, Skennerton et al.  find their two Izi­ma­plasma  isolates in one group together with Acholeplas­ma  and Phytoplasma  but separated from the Mollicutes (Mycoplasma, Spiroplasma ) by the Erysipelotrichia (Fig­ure 3; mind the typo in "E(r)ysipelotrichia" ). The Ery­si­pe­lo­trichia (28 named genera, ca. 220 species ) are Gram‑po­sitive, that is, have a cell wall, as has Turicibacter san­gu­i­nis  at the root of that tree, but not the first branching species, Haloplasma contractile. In contrast, their 16S rRNA-based tree shows the Tenericutes as monophyletic, with the branch point from the Firmicutes within one subgroup of the Erysipelotrichia, but the Gram-positive T. sanguinis  is now located right within the Tenericutes. Thus, the quest to find out whether the Tenericutes are truly monophyletic continues. This isn't me­rely an academic exercise! If they were monophyletic, one would have to assume that doing away with a cell wall was the audacious – but obviously viable – decision of one single ancestral Firmicu­tes species from the Erysipelotrichia branch. Otherwise, skipping a cell wall would have likely oc­curred several times during evolution from within a group of the Erysipelotrichia, in which case one would like to learn more about common features that 'primed' some of them to go on living cell wall-less.